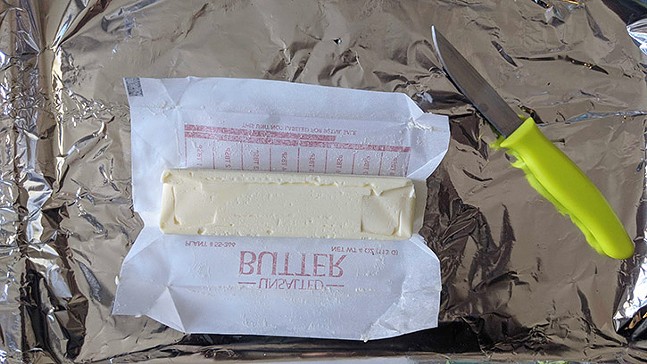 CP photo: Maggie Weaver
A blank canvas, waiting to be sculpted
If you’ve ever been to the Pennsylvania Farm Show, the largest agricultural exposition in the nation, you’ve seen the butter sculpture. The unveiling of the sculpture, which last year used 1,000 pounds of Pennsylvania butter, is known as the unofficial kickoff to the event.

This year, for the 105th annual Farm Show, the expo has gone virtual because of the pandemic. Instead of one gigantic butter sculpture, organizers have turned the dairy art into an at-home affair, challenging Pennsylvanians to craft their own sculptures through their Butter Up! Contest.

With the promise of a prize (a gift card to one of the members of the Pennsylvania Merchant’s Association), I knew I had to take on the challenge.

The Farm Show sets a few regulations for at-home sculptors: artists are limited to five pounds of butter, can stabilize only with chicken wire, are not allowed to depict anything vulgar or use food coloring, and must submit original work. What they don’t say is if you should use salted or unsalted butter. 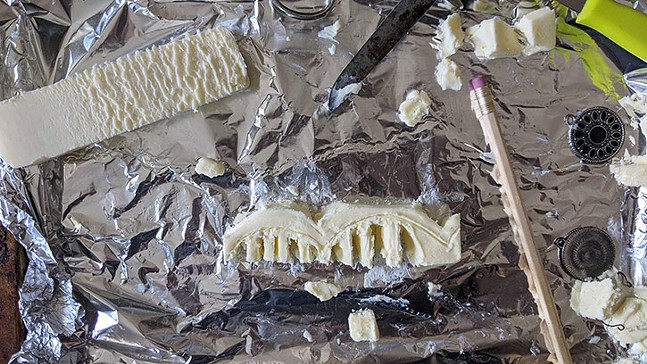 CP photo: Maggie Weaver
The artist begins her work on the butter.
I spent a good 10 minutes at my local Giant Eagle debating between the two. Would unsalted butter melt faster? Did the added salt compromise the butter’s structural integrity? Eventually, I went for unsalted butter for no reason other than that I could use the extras for baking.

CP photo: Maggie Weaver
A shape begins to form.
Then came the crafting. I had no tools suited for cutting and carving a melting medium, so I scrounged my desk, landing on a pencil, a knife, and the backs of two earrings. 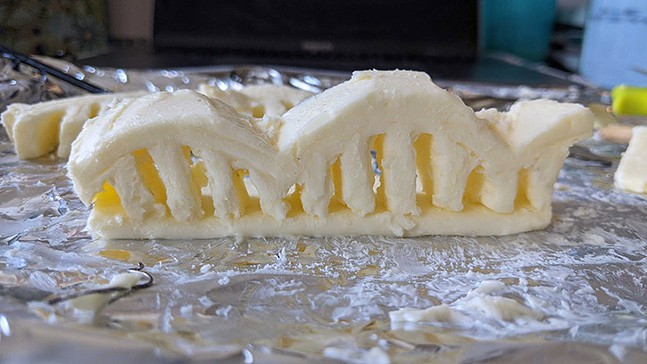 CP photo: Maggie Weaver
It stands!
It was messy work. The butter clung to everything, and my knife handles, hands, and table were soon covered with melting butter. (It wasn’t until later, at the suggestion of Pittsburgh City Paper Senior Writer Amanda Waltz, that I realized I should have tried carving it in my fridge.)

Despite the greasy workspace, my subject, the 16th Street Bridge, started coming to life. It’s not structurally sound, but that’s to be expected. It’s made out of butter. 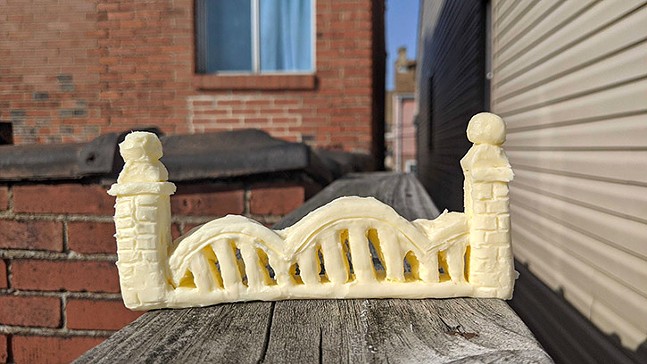 CP photo: Maggie Weaver
Maggie Weaver's butter sculpture of Pittsburgh's 16th Street Bridge
On Mon., Jan. 18, the PA Farm Show will post all butter sculpture entries on its Facebook page, divided into albums by age. Winners and runners-up will be decided by the number of Facebook reactions on their photo. If you spot my buttery 16th Street Bridge, give it a like if you think it's worthy.