Tereneh Idia: Who gets to be the (s)hero?

As a black child, I experienced stories without often seeing myself in them. 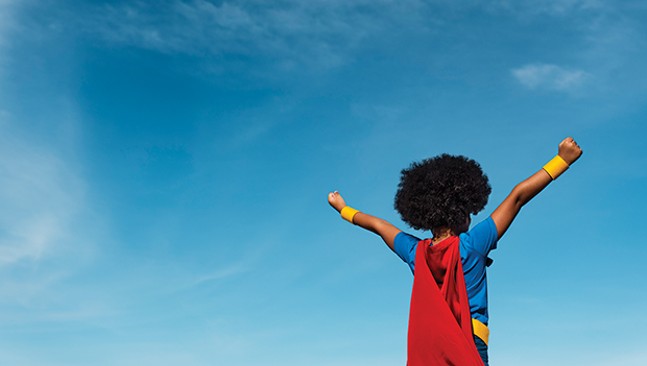 “But dad … Alec Guinness is in it, and James Earl Jones!” Eight-year-old me hoped two serious actors would persuade dad to let my brother and me see Star Wars: A New Hope.

“It’s too violent,” dad said. And I knew the conversation was nearing its end. We were losing the battle. “And,” dad said, continuing with a furrowed-brow finality, “no child of mine is going to a movie with the word ‘wars’ in it.”  It was the verbal equivalent of a lightsaber splitting the kitchen table in two, along with our hopes. Vrummummm.

We were not allowed to see the original Star Wars when it opened in 1977. We did see it eventually, and decades later I remain a huge fan of the series. When some of my new favorite characters — Finn (John Boyega), Rose (Kelly Marie Tran), and Rey (Daisy Ridley) — were subjected to racist and/or sexist harassment on social media, I wondered: “What’s up Star Wars fan fam?”

As a black child, I experienced stories without often seeing myself in them, never expecting someone like me to be the hero. I don’t know what it is like to be “so vain you probably think this song is about you — don’t you?” Don’t you?

I do not accept erasure of black, brown, women, and LGBTQIA peoples in science fiction or futurism. On the contrary, my love of these genres means I demand better. So, what to do with these vocal fanboy “manbabies” with the free time and determination to form harassing online groups?

No. 1: Creators of Star Wars and other pillars of popular culture need to own their part in developing these fanboys. Entire worlds are focused on white cis males in this galaxy and the ones far away.

No. 2: Understand that presenting the human experience includes representing People of the Global Majority (aka people of color). Depending on how you define “whiteness,” white people make up 15-20 percent of the world population. Whites are the minorities.

No. 3: All of humanity is interesting, complex, beautiful, and worth exploring.

No. 4: Representation matters. A recent University of North Carolina study found most American Christians think “God” is a white man. All of those Eurocentric paintings and that Fresco propaganda worked. If we create art and media for the world, let’s start reflecting the world.

As a young, black girl, one of my heroes was Luke Skywalker. I believe a young, white boy can be equally inspired by an amazing, black woman like scientist/princess Shuri from Black Panther. Someone may try to argue this point with me. But Black Panther has made $1.3 billion around the world. Vrummummm.