Tereneh Idia does collaborative design from a distance with OAM: A Pittsburgh Community Fashion Project 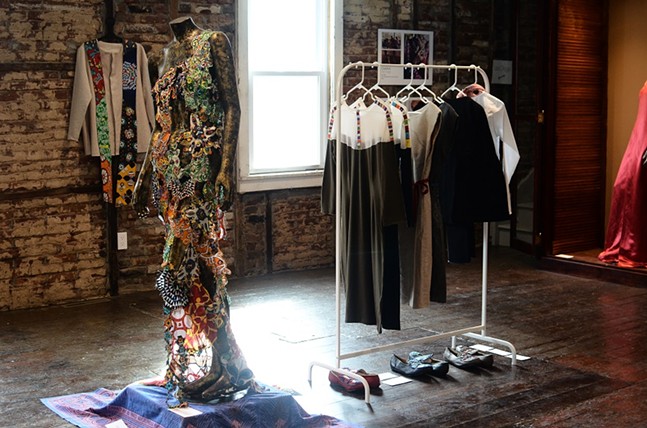 Photo: Tereneh Idia
OAM inspiration, the Half Your Team dress, on display as part of Casey Droege's The Residence program in 2016
Pittsburgh City Paper columnist Tereneh Idia has been hard at work on her own projects while in isolation. The writer and fashion designer, who works with indigenous women in Kenya and throughout the world via her collaborative eco-style company Idia'Dega, is creating a dress inspired by her hometown of Pittsburgh. And she's taking donations for it.

OAM: A Pittsburgh Community Fashion Project — named after the Ohio, Allegheny, and Monongahela Rivers that define the city — is an ambitious garment that will be comprised of fabric pieces donated by the public. The scraps must be approximately 4-by-4 inches, can come in any shape, and can be knitted, sewn, embroidered, beaded, or unadorned.

So far, Idia has received around 20 contributions from the local arts and design community, including BOOM Concepts, Knotzland, and the Brew House Association, as well as shop and restaurant owners, curators, and others. But the project is open to everyone, not just "creative workers."

CP spoke with Idia about OAM, her post-pandemic fashion predictions, and other projects keeping her occupied.

Why did you decide to embark on this project?
Three things got me thinking about what has become the OAM project: I bristle every time I see the term "social distancing" because that’s not it, it's physical distancing, and even the [World Health Organization] said weeks ago we should use the term "physical" and not "social" distancing. So the idea was to think of how to be physically distant but socially and even more importantly, creatively connected.

Second, a column I wrote for CP a few weeks ago about how to be creatively connected during the coronavirus time. One of the suggestions was to work on a project individually that could later become a collaborative piece, community-made design, or work of art.

Third, I thought back to some work we did at Idia'Dega. One was the Half Your Team dress made in this community quilt model, where each member of OMWA: Olorgesailie Maasai Women of Artisans of Kenya decorated three to four pieces of remanent fabric left over from other projects, and we made a gown. The other with the Pittsburgh Center for Creative Reuse called Many As One, part of the Small Arts Initiative grant program from The Heinz Endowments.

How does this compare with previous projects you've done?
This will be, I hope, much larger in scale, so the garment will be something that is based on the Three Rivers — the Allegheny and Monongahela the long sleeves and the Ohio the torso and legs, with a potential train as more and more pieces come in.

I am thinking of something that has a kind of non-gender specific look of a long tunic. I envision the sleeves to be quite long, kimono-like or like a medieval handfasting gown, then the torso and leg portion would be long and flowing with a long train. We can keep adding to it as the pieces come in. Potentially, the OAM garment will always be forming, flowing, growing. The plan is that it will be wearable but also dramatic and large.

What kinds of materials have you received so far? What are some of the highlights?

In order to be extra careful, we have a location collecting all the pieces. We are also disinfecting them as well.

Some have been amazing hand-prints and embroidered pieces. One person cut up some old jeans and is making a cool denim piece. Anyway, every time the studio that is collecting the pieces texts me a photo of the day’s mail it feels like Christmas in CoronaTime. We are also getting love from outside Pittsburgh. Pieces coming from Chicago, New York City, and Puerto Rico, so far.

How does this play into your mission of creating sustainable, ethical fashion?
Well, first and foremost, as a designer, I want to create collaboratively and in community, building new communities. So my work with the Maasai and Oneida Indian Nation artisans is part of that, how to connect across borders and barriers.

Also for me, sustainable is sustain and ability — so to learn or relearn textile arts, even the simple act of needle-and-thread sewing is important. But also to look to see how to create with materials you already have, reuse and upcycle an old shirt, rag, even a sock, whatever! The OAM project feels like it is part of that mission. In the words of Arthur Ashe, “Start where you are. Use what you have. Do what you can.” I cannot think of a better time for that mantra.

The goal is also to create projects for families looking to do something, even if it is just for a few hours or minutes in a day.

You compared what's going on now to the flapper era of the 1920s. What did you mean by that?
I used to teach fashion history in a former life and I am still very interested in the socio-cultural context of fashion and the meaning of what we wear. The flappers of the 1920s were a reaction to “doing everything you’re supposed to do” and still getting stomped on. So, for example, they had to survive the so-called Spanish Flu, which may have started in the United States with an estimated 500 million cases. Also World War I killed off so many men and young men, and we were coming out of the grips of the Victorian era of corsets and super long hair, restrictions on so many levels for women.

So anyway, these flappers were like, “Later for all of that, miss me with those corsets.” They cut their hair, they showed their ankles, they ditched the corset! They listened to that sex music, jazz, and drank bootleg wine in speakeasies. I am wondering what the 2020s version will be after this pandemic and what people will do in reaction to “doing everything we’re supposed to do” and still getting stomped on. Will men go back to being more expressive in their dress, less conservative? Will [they], like the flappers did in their time, reject gender norms in dress and lifestyle? I do not know, but it is an interesting thing to consider and observe.

It's interesting what's going on with fashion now that people aren't buying couture but instead investing in lounge and athleisure wear because they're stuck at home. Would you say this dress is sort of hopeful in that respect, that one day someone will wear it in public?
It is comfort, right? For those privileged enough to be at home to work from home. Or even those that work but when they get home aren’t going out. So athleisure is comfortable but also practical, it can function in so many ways.

Also, we were already moving in that direction anyway: the leggings, yoga pants, sweatpants, etc. What is really interesting is that those who still have to show up to work virtually are doing the Waist-Up Schiaparelli tactic [Idia covers this in her CP column "Finding chic comfort in uncertain times."] Very mullet, very Pittsburgh.

What are some things local clothing and accessory designers are doing in quarantine that you find interesting?
Well, I am always interested to see what Knotzland is up to. I know they are heavily working on masks for Mask Makers PGH. So important.

I also love to see what Mad Recital, Ruby Dawn, [and] Kelly Lane are up to, among many others. I definitely check my Instagram more than before. It brings life inside. It is important.

What are some other things you're doing or hoping to do during the shutdown?

So I have been writing a lot for a project, which is great. I also am doing some experimental designs for a new IdiaDega project called In Pitt’s Borough from flora and fauna I have found on the ground on local trails. There is the OBW: Other Border Wall project that I am doing in collaboration with Jennifer Nagel Myers and Leah Patgorski, where we are running a conceptual candidate for President in 2020. We plan on doing some virtual and, hopefully, in-person art-making this year and we will have an exhibition of that work.

If you would like to contribute to the OAM: A Pittsburgh Community Fashion Project, please send any donations to OAM Fashion Project, 5256A Natrona Way, Pittsburgh, Pa. 15201. Please include your name, age (optional), and location on the back of the piece. It can be written on masking tape, on a tag, or could also be on the front of the piece as part of the design.

Per the IdiaDega website, the pieces will be collected over the next few weeks and as long as they receive fabric submissions.

Meet the Pittsburgh designer creating fursuits for the furry community