“I was afraid to ride a bike. So, when someone would say ‘easy as riding a bike,’ I would think: Who are you kidding?”

Tracee Ellis Ross-pinkety-pink with magenta, ivory, and silver fringe cascading from each handlebar. That was my first bike.

At least, that is how I remember it. But there is a huge memory gap between my first bike and the bike I received as a gift last year — because I was afraid of bikes. Not in the way people are afraid of spiders. I did not have cyclophobia. So, when someone would say “easy as riding a bike,” I would think: Who are you kidding?

In Chicago, a friend and Ironman triathlete named Derrick Milligan encouraged me to ride again, actually training me and other black women to compete in triathlons. But every time I had to ride, I was nervous. I still cannot say clearly why, but it was enough to keep me off a bike once I left Chicago.

Fast-forward to now, and I really like to ride my bicycle. I say “really like” and not "love" for several reasons. But first, there is a question that can be fairly asked: Why are you riding a bike, scaredy-cat?
To get to my studio, the options are:

Riding my bike means more freedom to move. It is exercise, transportation, and to some extent, community. I am the cyclist that stops at the stop sign and red light. I do the hand signals when I am turning, and you may see me riding up onto the sidewalk to turn on the pedestrian cross signal because the bike does not register as present at an intersection. I am not perfect. I am careful.

This is "like" (not "love") for several reasons: cars parked illegally in the bike lanes; pedestrians crossing in front of my bike, as though I am invisible; hostile drivers with their “the road belongs only to us” vibe.

Also, those cyclists who were obviously never afraid to ride, who have little-to-no care for anyone else on the road. I am not one for respectability politics, but maybe we could model the behavior we want reflected back to us?

You can learn a lot about the soul of a city from the way the roads work or do not. What does the inability of our pedestrians, drivers, and cyclists to share these roads say about Pittsburgh?
__

Tereneh Idia does collaborative design from a distance with OAM: A Pittsburgh Community Fashion Project 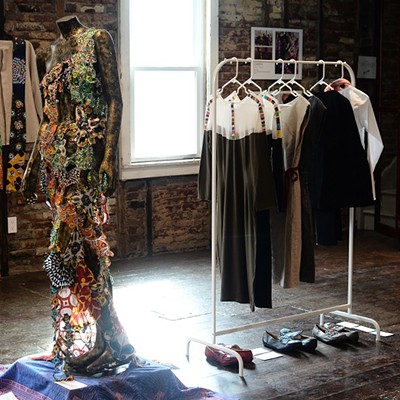