There's plenty of feel-good, chuckles, provocativeness and holiday cheer to go around. 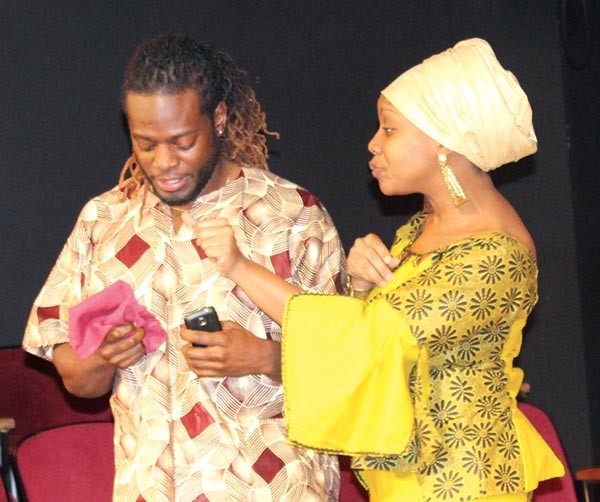 Never let it be said that Pittsburgh Playwrights Theatre Co.'s Theatre Festival in Black & White is timid in its demands for theatrical diversity in the many senses of the term. Already celebrated for mixing the talents of white and black playwrights, directors and other artists, the festival marches into double digits declaring that there are many holidays to celebrate at this time of year.

Mark Clayton Southers, company/festival founder and artistic director, asked 10 playwrights for new one-acts on a holiday theme — a tough genre even without an emphasis on Christmas. That's still the most represented holiday in the event (what? No Saturnalia or Festivus?), which offers a very large, very mixed bag in two portions.

Program A starts with a blast of nostalgia, gentle comedy and some serious, um, stuff in "St. Clair Xmas," nicely directed by Marcus Muzopappa. Wali Jamal has written himself a great role as the friendly neighborhood psycho, sipping hot chocolate and memories with some old St. Clair Village buddies, both white and black. Especially notable are a sharp-eyed Judy Kaplan, and a sharp-tongued Deborah Starling as his wife. Andrew Ade's "True Meaning," gently directed by Rita Gregory, is a lovely little lightweight tale of what "adult relationships" are really about. Tonya Lynn fulfills the wit and pain of the central character, with Adam Rutledge strong as her brother and Tonia Marie sympathetically cute as his wife.

A sure cure for holiday sweetness and light, Lissa Brennan's hilariously abrasive "And to All a Good Night" leaves no offensivenesses behind. Directed by Cheryl El-Walker, the over-the-top comedy upends every Guess Who's Coming to Dinner? stereotype with unabashed performances by LaMar Darnell Fields, Willa Cotton, Sara Fisher and William Blair, with Jamilah Chanie as the granny from hell. Completing the program are Tammy Ryan's well-meaning "Cornucopia" and Marlon Erik Youngblood's lassitudinous "Just Jesus."

While hitting more holidays, Program B also hands out more sermons. At least Kim El's "An Ubuntu Holiday," directed by Stephen Santa (for real), is a fairly gentle infomercial for its not-Christmas celebration. A gloriously outfitted Candace Walker explains Kwanzaa with humor, not a hammer, winning over her friend, gamely portrayed by Crystal Beatty. (Irony of the week: A former top BP executive is suing the we're-not-British petroleum producer after it fired her because her similarly "ethnic" dress "intimidated" her white colleagues.)

"We Need a Ramadan," by Aasiyah El-Rice, smooshes two plays together for an unwieldy pair of melodramas, though the latter's structure has a nice flow. Directed by Vince Ventura (who also plays a villain), Camille Washington, Candace Walker and Mayme Williams interact well in the inner-story. Sam Lothard brings both humor and heroism. "Hanukkah in the Back Country," by Judy Meiksin, is also light on credibility, but avoids the heavy hand of preachiness. Kim El directs this slight tale about sisters, sisterhood and Hanukkah.

While I might question the "screamer" (copy-editor-ese for exclamation point) in the title, I don't doubt the sincerity, effort and enjoyment inherent in the 10th Annual Theatre Festival in Black & White: Holiday Edition! There's plenty of feel-good, chuckles, provocativeness and holiday cheer to go around. And remember, Christmas warriors: Bill O'Reilly would be turning in his grave if it weren't only his sense of humor that was dead.