Aside from a few clever flourishes here and there, Pappas and crew let the text speak for itself. 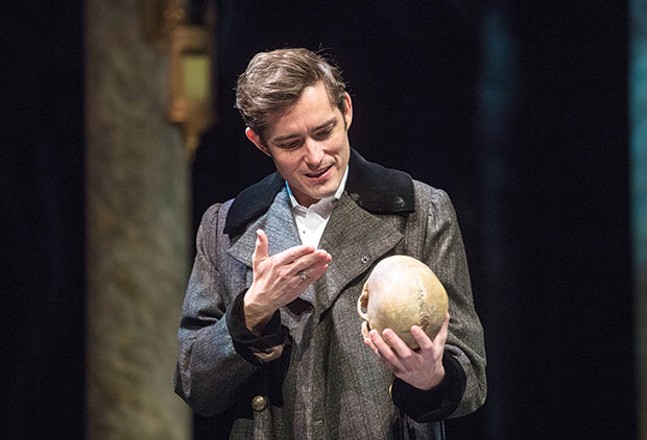 After an impressive 18 years with Pittsburgh Public Theater, artistic director and managing director Ted Pappas is moving on. And what better sendoff for a theater veteran than taking on Hamlet, one of the biggest monsters in all of theater?

If it's been awhile, here are the bones of the thing: young Prince Hamlet returns to Denmark after his pops dies in questionable circumstances and finds his mom, Queen Gertrude, has already been remarried to his Uncle Claudius. There's something fishy about the whole thing, underlined by intermittent appearances by Hamlet's ghost-dad who dishes on Claudius' fratricide and implores his hesitant son to get revenge. That might seem like good, reliable ghost-based evidence, but Hamlet has his doubts. A great deal of handwringing ensues. There's a play within a play, a dead court jester exhumed and some badass sword-fighting. A bunch of people die. You might not remember every twist and turn of the story, but you'll surely recognize its many imprints on modern language ("doth protest too much," "infinite jest," something about brevity and wit).

While the entire ensemble handles the challenging language admirably, Matthew Amendt thrives in the title role. He won a Shakespeare monologue contest while still in high school and his ease with the tongue twisters is key to the production's success. Matt Sullivan, as Prime Minister Polonius, provides some much-needed levity to the infamously heavy tale. But the big comic moments land on the shoulders of Tony Bingham and Quinn Patrick Shannon as the gravediggers; they do not disappoint.

As with any canonical work, the challenge of directing Hamlet comes down to deciding where to make creative decisions and where to leave the original text intact. Too much embellishment and you'll be roasted by the traditionalists, but a tasteful creative tweak here and there can make the difference between memorable and dull. Pappas walks the line well. The costumes by Gabriel Berry mix recognizably Shakespearian garb with august, early 20th century suits and jackets (Rosencrantz and Guildenstern could sub in for Sherlock Holmes and Dr. Watson in a pinch). The original score by Zach Moore punctuates the transitions without being distracting. But aside from some clever flourishes by Amendt's Hamlet, Pappas and crew let the text speak for itself.

It's a hell of a curtain call.