While interactivity is often overplayed, the truth is that technology connects us in astonishing ways. 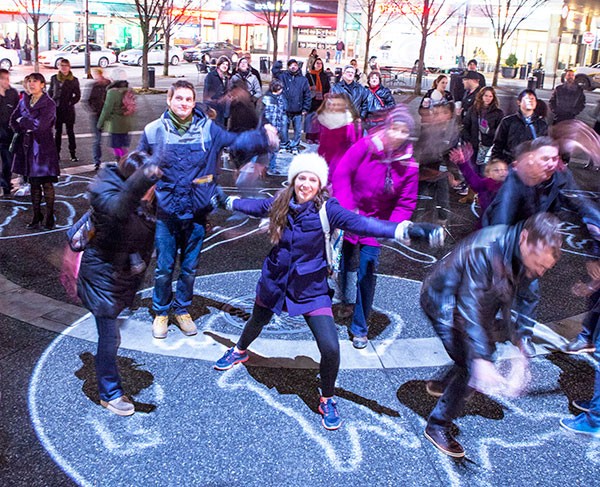 As technology develops, our everyday experiences are increasingly mediated, and many activities that used to be solitary are now interactive. While interactivity is often overplayed — giving critics good reason to lament the loss of quiet contemplation — the truth is that technology connects us in astonishing ways. And while it can distract us, making us seem at times antisocial, it can also enhance our social behaviors.

Not long ago, experiencing visual art was basically limited to looking. But these days, with pieces like rAndom International's "Rain Room" and Carsten Höller's slides, many works presented in museums encourage audience participation. Public art, by inhabiting shared space, inherently involves and engages citizens in their everyday environment. Even static sculpture, placed in a public location, inspires varying degrees of welcome (or unwelcome) attention. But public art too is becoming increasingly interactive.

The key to most interactive art is that the experience not be entirely orchestrated or predetermined; it truly requires audience participation. Congregation is an interactive video-and-sound installation on display evenings in Market Square through March 16. It's conceived by the British artists Kit Monkman and Tom Wexler, who, working as KMA, were among 130 artists who submitted work to the Market Square Public Art program, a new initiative of the City of Pittsburgh's Public Art Division, managed by the Pittsburgh Downtown Partnership.

Congregation plays in "one of the city's most important public spaces," says Renee Piechocki, director of the Office of Public Art for the Greater Pittsburgh Arts Council. This also marks the North American premiere of Congregation, which world-premiered in 2010, in Shanghai, and has also been exhibited in numerous U.K. cities as well as Macau.

KMA creates pieces that explore the potential of new technologies, such as thermal imaging. The artists are inspired in part by the way Fluxus artists created instructions or scores, which could be used by anybody to create a work of art. KMA expands that concept by creating a basic narrative that changes with each presentation based on how the audience responds.

KMA has found that participants interact with their work best when there are "provocations" that elicit understanding. With Congregation, KMA provides a 25-minute cycle of light projections that plays within a circular space on the ground and is accompanied by Peter Broderick's musical score. While the video includes discrete sections, the piece exists only when participants, captured by a heat-sensor camera, interact within the circle. By observing a 50-foot screen suspended above, people on the ground can watch as the thermal camera spotlights, silhouettes and connects them by lines to others.

While the artists perhaps do a bit too much emotional manipulation, their use of twinkling lights, spotlights, converging lines, human silhouettes and sentimental score nonetheless lead both participants and observers to feel a deep sense of community and connection, even among strangers.