“We’ve been able to learn so much about these animals.” 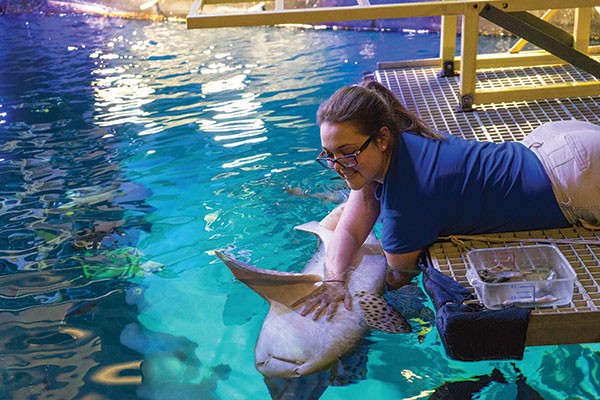 Photo by Aaron Warnick
Pittsburgh Zoo aquarist Ariella Wiener checks out a resident of the PPG Aquarium. Wiener is able to use techniques developed at the zoo to communicate with the animals.

Standing on a platform over a 90,000-gallon tank, an aquarist of the Pittsburgh Zoo and PPG Aquarium steps forward and begins waving her arms in the air. She’s catching the attention of a 660-pound Queensland grouper dwelling 27 feet below, at the bottom left corner of the tank. But her arm movements aren’t random; she’s calling him for dinner. The massive fish receives his meal.

Next, aquarist Ariella Wiener picks up a yellow PVC pipe with a matching yellow circular cut-out bolted to its end. She waves it under the surface of the water. In the other hand, she holds a long, retractable claw with a squid dangling from the end.

Suddenly, from the depths of the tank, swimming through the coral, come two hungry benthic (bottom-dwelling) zebra sharks. When they reach the surface, though, they don’t lunge for the squid. Instead they touch their noses to the yellow circle and are then rewarded with food.

This technique, called “tactile target-training,” was a major advancement that is now used at zoos around the country. And it originated at the Pittsburgh Zoo & Aquarium.

Skylar Snowden, a former aquarist in Pittsburgh (who now works at the Ripley’s Aquarium, in Toronto) began researching this communication technique on sand tiger sharks at the PPG Aquarium, in 2005. During her time in Pittsburgh, Snowden researched, practiced and perfected the technique on the tiger sharks, teaching them how to move to the target and be rewarded with food. The training is done during the animals’ first 30 days in the aquarium (the “quarantine phase”).

A main part of the training is “approximation,” which is the process of slowly bringing the animals directly and coolly to the trainer for food. Eventually the aquarist is able to place the food directly in the animal’s mouth. This process is extremely important to master, especially when trying to lure bottom-dwelling animals to the surface for feeding.

Over time the technique has been so successful that now many aquarists, including Wiener, are able to call the sharks, and without fear, physically roll them over to draw blood samples while giving a physical examination.

“[Before approximation] there was never a baseline blood sample being taken from these species,” says Weiner. The blood tests allow the aquarists to monitor illnesses as well as the mating and feeding habits of the animals.

Approximation and tactile training allow scientists to provide each animal with more individualized and efficient care. The technique has been adapted for animals including moray eels, blacktip reef sharks, zebra sharks and groupers.

The process takes time: Initial results on a given animal aren’t seen for at least two months. But eventually the reward-based routine becomes so normal that it solidifies as a feeding and medical practice.

Despite the benefits of the technique, zookeepers perform a balancing act. It’s a system based on a combination of trust, respect and encouragement. Employees must keep these animals healthy and happy, while also insuring that each animal remains true to its natural instincts.

“When we are in the tank or in the exhibits, we are essentially acting as ambassadors for how to behave around these kinds of animals, especially if one day you see one in the wild,” Wiener says.

Tactile-targeting training begins as soon as the animals arrive at the zoo. The animals that come to the zoo are carefully selected, to make sure that the new animal is not related genetically to other animals currently at the zoo, says zoo spokesperson Tracy Gray. This is done by consulting the animal’s Species Survival Plan (SSP) provided by the Association of Zoos and Aquariums (AZA). And while the Pittsburgh Zoo dropped its AZA accreditation last year, Gray says the SSP is vital to continue growing the zoo’s population. This allows the species to thrive and survive without any “genetic confusion.”

“Someone once said, it’s like a dating agency for animals,” Gray says.

Once the animal arrives, it goes into quarantine, where an assigned aquarist monitors its health to ensure that it didn’t contract a virus during its journey. This protects both the new arrival and the existing zoo population.

During quarantine, aquarists monitor the animals and keep track of behavioral and physical characteristics. Each time a quality is identified, whether abnormal or not, it is recorded into the aquarium’s “studbook.” A studbook (or breed book) is basically the family tree and bloodline of every registered animal species within that zoo or aquarium. The book allows other zoos and organizations to document research and findings on any specific animal, and then compare that information with institutions across the country.

This documentation both allows for updated care and treatment and opens lines of communication with other organizations. This means that once the Pittsburgh Aquarium published the research in its studbook, aquariums all over the country could start adapting it to their benthic marine animals.