"If the numbers don't go up, it won't be possible to run programs for only a few" 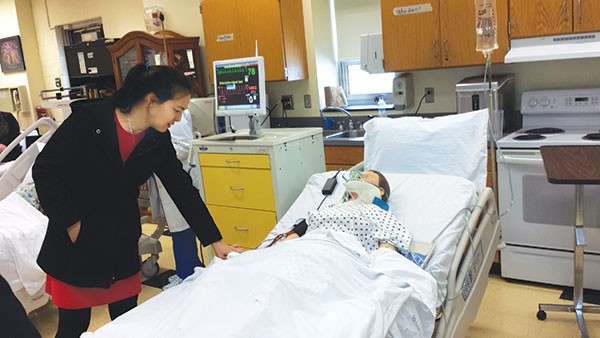 When the students in Carrick High School's health-careers technology program get their diplomas, they won't have to worry about what they'll be doing after high school.

"We have students that are graduating in June," Mary Kozicky, a registered nurse who runs the program, said during a tour of the school's facilities last month. "And I'm thinking they're going to enter the workforce with UPMC directly after graduating."

Post-high school opportunities like this are the main selling point of Pittsburgh Public Schools' Career and Technology Education program. But while the program gives students the chance to enter the workforce after graduation, several of the classes are under-enrolled. Some may face elimination as the district faces a projected $36 million deficit.

"I'm definitely concerned," says Angela Mike, executive director of the district's CTE programs. "I'm concerned if the numbers don't go up that it won't be possible to run programs for only a few students. We are monitoring that closely."

Enrollment in CTE programs — once widely referred to as "vo-tech" programs — is on the rise nationally. But Pittsburgh Public Schools has struggled to fill classrooms.

According to district data, the CTE program's capacity is 700 students, but only 528 students are currently enrolled. Of the 35 sessions run district-wide, 29 are below maximum capacity, and eight of those are less than half full.

PPS Superintendent Linda Lane says the district is working to increase enrollment while also making the best use of its resources.

"If we have a CTE program that is severely undersubscribed and we can't fill a classroom, we're going to have to shift our resources to the programs kids want to take," Lane says.

The district is actively working to increase student interest in these programs. Throughout the month of February, it launched a series of CTE events, including a career fair and backstage-pass tour to give school counselors a look at CTE programs at Allderdice and Carrick.

A job in some of those fields can be a ticket to the middle class. A 2012 report from the U.S. Bureau of Labor Statistics listed engineering technicians, makeup artists and registered nurses among the 50 highest-paying jobs that don't require a college degree. The average salary for an HVAC technician is $42,000 per year, while the average salary for sports business management is $60,000. But these two programs are among the most under-enrolled in the district.

During the Carrick tour, counselors heard from CTE instructors about how their programs prepare students for future careers. For example, the newly launched carpentry program has a partnership with the Greater Pennsylvania Regional Council of Carpenters Local 142. Students have been able to visit its facilities.

"It's a really good opportunity" for students, said carpentry instructor Carl Uccellini. "My goal is to make them workforce-ready."

Other programs give students a leg up when they enter college or another post-secondary institution. Students in the accounting program, for example, will already have completed courses that will be required in their first year of a college accounting program. And students in the health program who choose to pursue medical school will have already learned many of the basic skills they need.

"They come out of here, they go on to college and their first year of accounting, they're guaranteed to get A's," says accounting instructor Brian Hoelzle. "Business is the number-one major in college right now."

"There are some people that don't recognize [the CTE program] has changed," Lane says. "It encompasses all of the tech fields that weren't around before. There's been a huge shift, and we're trying to make sure our parents and our community understands both the opportunities in the fields and the salaries people can get."

Creating partnerships with local employers is a strong component of the CTE programs. Several employers serve on the district's Occupational Advisory Committee and are tasked with keeping CTE instructors up to date on changes in their field.