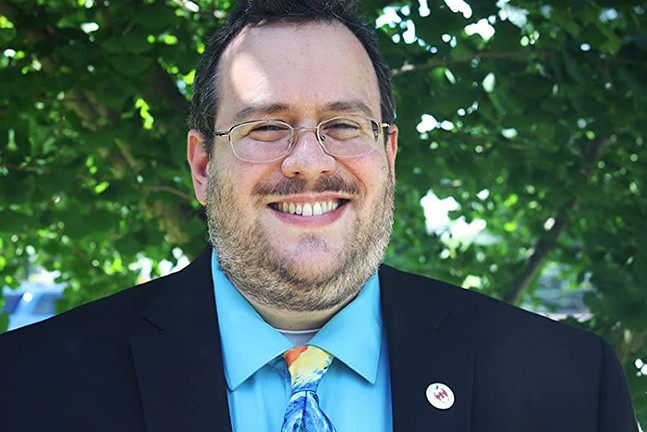 Photo: courtesy the campaign
Steven Singer
For Steel Valley Middle School teacher, Steven Singer, service and education have always been at the forefront of his work. But over the years, Singer says he noticed a growing sense of injustice and increasing social problems among his students and their families in the Homestead area and the Mon Valley.

Motivated by their struggles and support, Singer notes he is looking to “turn the tide” in Allegheny County politics, and he is running in the Democratic Primary to try to secure a seat on Allegheny County Council.

“I think it’s time for new blood in the political arena,” says Singer.

While this is his first campaign for elected office, Singer has worked extensively in what he describes as “impactful” and “essential” efforts to improve his community, including working with the liberal political group MoveOn back in 2012.

“If I’m going to do this, I want to make the most difference,” says Singer.

As an educator, Singer says he seeks to “do things outside the classroom to make it possible to be in the classroom.” In 2011, he founded T.E.A.C.H., a grassroots organization that fought to stop statewide budget cuts to public education.

If elected, he says he plans to make education a major focus of his tenure, stating the real impact County Council has on the funding of the Community College of Allegheny County. Singer says he is ready to push for the realization of a long-time promise: that community colleges are equally funded by the county, state and student tuition. He thinks his unique insights as a teacher have prepared him to take on this fight.

“We need people who understand the profession to have leadership roles,” says Singer.

Another area where Singer plans to push for reform is criminal justice.

“The Allegheny County Jail is a mess, and we need real reform in that area,” says Singer.

He says that roughly 80% of all of those incarcerated in ACJ have not been convicted of a crime, but instead are awaiting trial. He is also bothered by the lengthy parole system in Allegheny County, and if elected, he plans to work with other progressives on County Council to further criminal justice reform measures.

“The system is so stacked against people,” says Singer. “And we’re paying for it.”

Throughout his time campaigning, Singer has made a point of knocking on doors and meeting his potential constituents and listening to their concerns. He notes the strong bonds he has made with the members of his community and his intentionality when discussing important issues with them.

“There’s a place for everyone,” says Singer.

Although seeking public office has been on his mind for many years, it wasn’t until the Jan. 6 Capitol riots that Singer firmly decided to run for Allegheny County Council.

“It’s been a long time coming,” says Singer. “I have to stand up and do what I can to hold things together.”

In speaking to the residents of the Mon Valley, Singer says he has found that many people feel “betrayed by a lot of leaders.”

He is set to face off with Macey in the primary election on May 18.

“It’s time for a change,” says Singer. “Because my community deserves it.”