The show never really digs any deeper than our received notions. 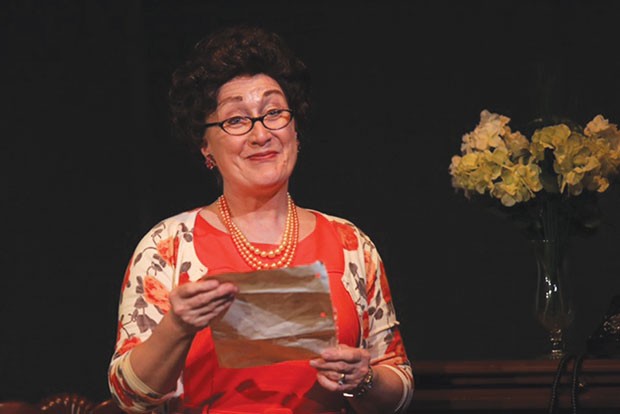 South Park Theatre recently closed its first production of the season, Nana’s Naughty Knickers. I didn’t happen to catch it, but a title like that hardly encourages thoughts of deep, heady theater down the road.

So I’m surprised and happy to talk about South Park’s current offering, Tea for Three: Lady Bird, Pat & Betty. The script, by Eric H. Weinberger and Elaine Bromka, is three monologues for one actress playing all of the above First Ladies.

The piece was written as a one-woman show for Bromka and performed in New York in 2013. In an understandable alteration, South Park has cast three actresses: Allison Cahill as Lady Bird Johnson; Reneé Ruzzi-Kern as Pat Nixon; and Lesa Donati as Betty Ford. Allison M. Weakland directs.

Weinberger and Bromka have made two smart choices: It’s a quick show, lasting less than 90 minutes, and the playwrights introduce us to the women as each is vacating the White House, upping the stakes considerably.

The show never really digs any deeper than our received notions. The women address the audience while reciting events we already know from headlines. But even at a headline level, they did lead interesting lives in interesting times, and I was engaged for most of the night.

Cahill (and Johnson) are best served by this CliffsNotes approach. Cahill’s bemusement as a “down-home girl” finding herself in D.C. is endearing, and skimming through a précis of Lyndon’s political career feels just right. Additionally, Cahill (like Weinberger and Bromka) reminds us that no matter where the Johnsons went, the people they met were always wishing to meet the “real” First Couple.

Nixon’s presidency is far too complex and dramatic to be fitted with such a lightweight treatment; Ruzzi-Kern is effective and moving but is shortchanged by this abbreviated retelling. Weinberg and Bromka don’t seem to know what to do with Betty, so there are jokes about her drinking and her sassiness, which add up to nothing. Donati plunges in but can’t define a character the writers haven’t written.

And look at me, I got through all of this without making a Melania joke.