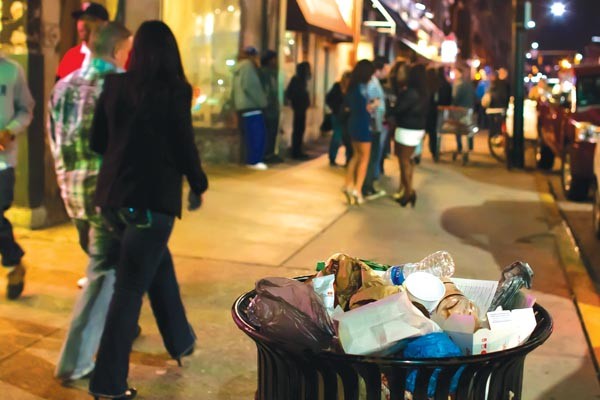 Anne Parys knows the benefits of living in the South Side. A resident for 20-plus years, she enjoys the walkability of the area and nearby resources like shops, grocery stores and a movie theater.

But the Sarah Street resident is also keenly aware of the challenges of living in the city's entertainment district, home to 108 active liquor licenses, and dozens of clubs and bars that attract approximately 20,000 revelers every weekend.

"I've cleaned up pretty much every bodily fluid in my alley. I've had drunks knocking on the door at 2:30 [a.m.], so drunk they were at the wrong house," says Parys. "It has its downside at times."

That's why Parys is supporting the proposed South Side Neighborhood Improvement District. The program assesses an annual fee to residential- and commercial-property owners for services in the neighborhood provided by the district. If the district is created, it would be governed by a board of directors — elected by property owners — that would distribute funds generated from fees, grants and other contributions throughout the neighborhood.

The proposed zone runs from approximately Ninth Street to 29th Street, encompassing most of the streets from the river to the railroad tracks at the bottom of the South Side Slopes.

Currently, the South Side Planning Forum, composed of a handful of community groups, is weighing the decision. If they approve it, it will start a lengthy process involving public hearings and eventual city-council deliberation.

The plan has its critics. Some store and restaurant fronts along East Carson Street and throughout the area display signs with a red X over the letters "NID."  Other residents are working on a petition to stop it.

Pittsburgh City Councilor Bruce Kraus, who represents the area, says he supports the process playing out.

Improvement districts, whether designated as business (BID), neighborhood (NID) or special services (SSID), aren't anything new in the city or the rest of the country. The city currently has three: the Pittsburgh Downtown Partnership, Oakland Business Improvement District and one in the Allegheny West neighborhood, which will soon disband as its revitalization project of Western Avenue wraps up.

"The concept is really similar to malls. The difference is in malls, you've got one owner who calls all the shots for the retailers; here you have multiple stakeholders," says Georgia Petropoulos Muir, executive director of the Oakland Business Improvement District. "If the whole district benefits, you will benefit individually."

The OBID was formed in 1999 and encompasses the Fifth and Forbes corridor and the side streets in Central Oakland. Commercial property-owners in that area are currently assessed 3.7 mills on the land and building rate, which generates about $250,000 annually to contribute to additional services outside of the basic level the city provides.

The fees are supplemented by donations, grants and other money, and most of the work is performed by private contractors.

Such services include daily sidewalk-sweeping, seasonal pressure washing and other beautification efforts. But it also offers more than public infrastructure improvements and beautification in the business district; OBID, for example, provides marketing services, events, business development and business recruitment.

"Public funding for things like Main Street programs are shrinking," says Josette Fitzgibbons, Main Street coordinator with the Urban Redevelopment Authority. "We've been encouraging our groups to look at this because it's not only a way to continue the benefits of a successful [improvement] program; it's a way for the community to really control their own destiny."

The most daunting challenge for groups, Fitzgibbons says, is to get the NID established. By law, if 40 percent or more of affected property owners file an objection to the project, the district can't be formed. In Easton, Pa., for example, a majority of property owners voted against the creation of the district. Efforts to establish an NID in East Liberty have been going on for at least four years and are now, according to Fitzgibbons, "in a holding pattern."

In the South Side, the plan calls for the formation of a nonprofit organization to collect and distribute fees. The board would be elected by property owners and have seats for both business owners and residents.

The fees are based on the total assessed value of a property. A cap is also being proposed of $40 a month for owner-occupied residential properties. For seniors or those with limited income under Act 77, there would be no fee. Renters could face a fee of $230 a year; commercial properties could face $862.

"It is unlike a tax in that the tax dollars paid by a resident of Mount Washington can end up in East Liberty, but improvement-district fees paid by South Side property owners have to stay in the South Side," Puskar says.

And with the pending closure of the South Side Local Development Corp., in the summer, Puskar and other NID proponents say there will be a void for a community voice.

Parys, the South Side resident and a Development Corp. board member, says she doesn't see any other options for residents. "The city has been clear [that] we aren't getting any more services than what we have now — which [are] pretty insufficient."

And with the Development Corporation going away, she adds, "I'm concerned there's not going to be anybody keeping an eye on the big picture."

But not everyone supports the idea. Community activist Mark Rauterkus, who lives on 12th Street in the Flats, says he would support the NID only if it were an opt-in program.

Taxes, he says, "go to the city controller and we can watch it. There are a lot of checks and balances within the government." But as the proposal stands, Rauterkus says, "the NID is a tax increase and it comes without accountability."

Meanwhile, in a Feb. 27 editorial entitled "Bar This Tax," the Pittsburgh Post-Gazette blasted the plan, asking, "What would residents get for their money? Very little beyond what every taxpayer has the right to expect in public services in exchange for paying basic city taxes."

But even city officials say the notion that the city can do more is misguided.

"The truth is, it's just not a level of service that the city of Pittsburgh, or really almost any city or municipality I know of, has the money to provide," says Fitzgibbons, at the URA. "When you have local governments that are stretched thin, you have the whole city of Pittsburgh which is 55 square miles that you have to provide services for, to expect that there might be a higher level of service ... there just isn't the money to do it."