This is the best PMT production I have seen. 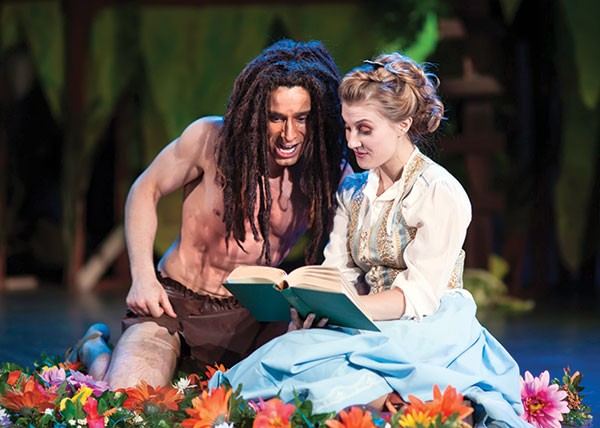 continues through Sun., May 19.

It may not be easy being green, but Pittsburgh Musical Theater's production of Disney's Tarzan is doing an awfully good job. The Byham's stage has been turned into a remote Congo jungle, complete with torrential rainstorms, flying cockroaches, cavorting fireflies and killer leopards.

Tarzan the Ape Man's English is nearly nonexistent. Yet he is able to break into Phil Collins songs with the ease of Lindsay Lohan slipping into court.

But oh! What fun this is!

The story of a baby boy, left behind after a leopard kills his parents, has been pure escapist fodder ever since Edgar Rice Burroughs penned the first of his 24 Tarzan novels back in 1912. Daddy Ape Kerchak hates the "thing" and favors infanticide. But his wife, Mama Ape Kala, sees the baby as a replacement for the child they lost to the leopard.

We watch Tarzan go from boy to man, swinging on ropes, playing with his best pal, Terk, and wondering why he is so different from the others. (One reason: He refuses to roll around in ape poop, as his primate pals are wont to do.)

But it's when the grown Tarzan swings onto the stage in the form of a loin-clothed, dreadlocked muscle-stud that the real fun begins.

He falls for a visiting English explorer named Jane; he falls in love with her and her him.

This is the best PMT production I have seen, and kudos must be given to the cast and crew, especially scenic designer Todd Nonn, makeup designer Christopher Patrick and director Colleen Petrucci, who makes the two-hour-plus evening swing by faster than Tarzan at his quickest.

Real-life hubby and wife David and Kathlene Toole play Tarzan and Jane, and their chemistry boasts just the right amount of mischievous glee and wonder.

Alysha Watson steals the spotlight. She brings Kala's soul and heart to life with staggering presence. She is brilliant. And I don't use that word often. If she's not a household name, I'll eat my first edition of Tarzan.