With its tucked-away, village feel, the West End is somehow a fitting setting for a French café-style restaurant. Squint, and it’s easy to imagine you’re in a tiny hamlet — one that feels, in that ineffable European way, both ancient and modern — in the foothills of the Pyrenees.

Tartine opened a couple years ago on South Main Street with limited hours and light offerings. But it has gradually expanded to include, if not quite a full menu, then a far-ranging one, from salads and sandwiches to full-on, and filling, French classics like cassoulet.

Underlying it all is a deep and abiding Francophilia, exemplified by the rusty antique bicycle-cum-flower-planter out front, selected because its skirt guard resembles that in a photo of a Parisian cafe circa 1938 — which is, of course, displayed indoors. You can even bring home a memento of France in the form of imported cookies and jams sold near the dessert counter.

But first you’ll want to explore that menu. Tartine’s quiche Lorraine, an iconic French dish, approaches perfection. Gruyere provided a background of nuttiness while egg — miraculously silken in texture, and rich but not heavy in flavor — took the fore, demonstrating that it can be so much more than filler and binder. The quiche’s crust could have been a little flakier, but we’ll let this speak for the overall quality: Our tween daughter, bitterly disappointed at the absence of crepes and deeply skeptical of quiche, immediately fell in love with this dish. Bacon lardons helped, as did excellent potatoes Lyonnaise, thinly sliced wedges browned with softened onion, on the side. 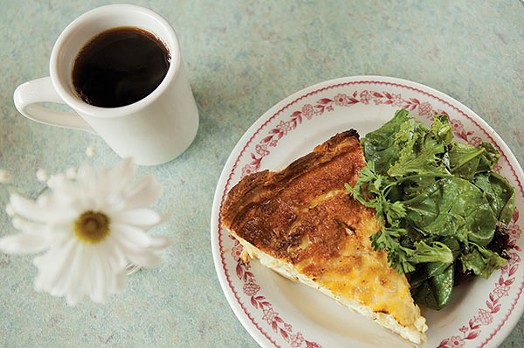 Jason is a different kind of tough audience for a turkey sandwich on croissant: He’s always up for trying one, but his standards for really liking one are high. Tartine’s croissant, alas, was a bit of a letdown. We found it too bready, although it also avoided the pitfall of being too flaky to contain sandwich fillings. But those fillings were superb: The turkey was thick, hand-carved slabs; slices of brie were generous; and the greens and tomatoes were dressed, not dry.

We got more of those greens in salade Niçoise, and with the same dressing, a light, refreshing lemon-basil vinaigrette that’s also used in the house salad. Salade Niçoise is a classic, hearty, meal-grade salad, and as such, brings together myriad ingredients into a cohesive whole that is more than the sum of its parts. Tartine’s met this standard handily. We especially appreciated the use of oil-poached tuna in place of the seared steak that has become de rigueur in most restaurant preparations, but which all too often tries to hog center stage instead of working in concert with the half-dozen other components of the salad. There was but one off note: The haricots verts were raw, or else so lightly cooked as to seem so. Now, this might be fine with actual French green beans, which are thinner and more tender than American ones. But these were American green beans, albeit relatively young ones, and they were distractingly firm and crunchy; a mere minute of steam or blanching would have done wonders.

Angelique can never resist croque monsieur, that wonderful mashup of French toast and grilled ham-and-cheese. Tartine’s version arrived with the Gruyere cheese melted on top, not inside, giving an added resemblance to grilled flatbread — although with those thick-cut hunks of “Parisian” ham inside, there was nothing flat about this sandwich. Dijon bechamel and a slice of tomato enhanced the savory flavors in every bite with creamy and astringent notes. 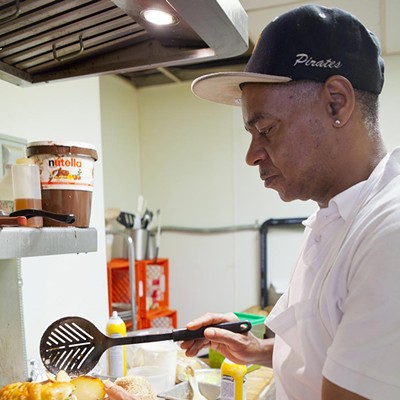 
Tartine takes its name from another kind of sandwich peculiar to France, the open-face hot sandwich, particularly “one with a rich or fancy spread,” as noted by an online dictionary. With its cheese on top, the croque monsieur nodded to the tradition of tartine; the menu’s desserts actually are tartines. Of the four on offer, we selected bananes et Nutella to share. The grilled country bread provided a pleasantly unsweetened base for the simple but delectable slick of chocolate-hazelnut spread and layer of sliced bananas; raspberries and strawberries garnished the plate, adding both color and seasonal fruit flavor.