A police chief holds himself accountable 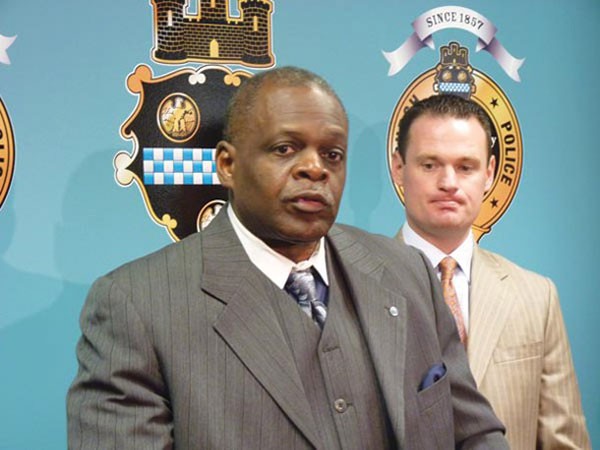 "Here he comes," a reporter said quietly as former Pittsburgh Police Chief Nate Harper walked down the ninth-floor hallway of the federal courthouse. A cautious gaggle gathered in front of the doors of courtroom 9B as Harper approached, a few steps behind attorneys Robert Leight and Robert Del Greco.

"How ya doing, Nate?" another reporter asked.

Harper, his tan sport coat fitting loosely, seemed visibly diminished since Mayor Luke Ravenstahl pressured him to resign Feb. 20. He tipped his head to the side and walked in, saying nothing.

It was not Harper's first appearance in federal court. It wasn't even his first appearance that week: Days before, he'd listened to testimony in a civil suit against a former city detective, Bradley Walker, who'd allegedly assaulted a motorist after a fender-bender.

But this time, Harper was the defendant, accused of not filing federal tax returns and misdirecting $71,000 in public funds to an off-the-books account, and using nearly half the money for personal use.

He likely won't need it. "He takes full responsibility," Leight said a short time later at a press conference. The accusations, Leight and Del Greco said, were "unambiguous, overwhelming and indefensible."

But the verdict on Harper may already have been handed down.  In the city's police bureau, which Harper has led since 2006, suspects aren't the only ones being questioned anymore.

Walker, for one, is no longer on the force after his 2010 altercation with driver Jarret Fate. But he'd been the subject of more than 30 citizen complaints over the previous decade, and Fate's attorneys were suing the city because, they said, he should have been disciplined more effectively, even terminated long before 2010.

On March 25, a jury cleared the city, finding that because Walker had been acting as a private citizen when he attacked Fate, the city wasn't liable. But another officer, Garrett Brown, is awaiting a criminal trial in an alleged road-rage incident involving a delivery truck. Brown, who was terminated from the force, was named in more than two dozen citizen complaints prior to the incident, attorneys for the delivery drivers allege. Meanwhile, Detective Frank Rende, an officer with his own controversial history, was caught on videotape accosting a South Side reveler and berating a crowd of St. Patrick's Day onlookers, while waving around a Taser.

And those are just the most recent headlines. Harper's tenure included the controversy surrounding the beating of Homewood teenager Jordan Miles, and the case of Paul Abel, an officer who, while off duty, accidentally shot a South Side man in a case of mistaken identity.

Harper has defended some of those officers, and promoted others. But even when the city sought to discipline or remove an officer — as it tried to do with Abel — the decision was reversed by a labor arbitrator.

Such obstacles were around long before Harper took command. In the late 1990s, voters approved a civilian-review board to look into claims of police misconduct, while federal officials subjected bureau management to a court-ordered consent decree. But the decree was lifted, and the review board has no disciplinary power — and the complaints about a lack of accountability continue.

"The worst part is not [that] these incidents occurred," ACLU-PA Legal Director Vic Walczak said Feb. 27, during a press conference where civil-rights advocates urged a thorough search for Harper's replacement. "But who's taking responsibility [by] standing up to say they won't happen again?"

It will have to be someone other than Nate Harper. An hour after his court appearance, his attorneys spoke with reporters at their offices in PPG Place. Harper did not join them — too mortified by the accusations, they said.

"If he would have showed," Del Greco said, "I know he was prepared to indicate he is embarrassed and sad and humbled and contrite."

Leight and Del Greco said they hoped to work out a plea deal: Federal sentencing guidelines allow for up to nine years in prison, though the lawyers hope to soften that to a sentence of between 10 to 16 months, possibly on house arrest. Still, they say, Harper's misdeeds have cost him his career, and possibly his pension.

Even prosecutors took little pleasure in the charges. "This is a sad day for many of us — we worked with him," U.S. Attorney David Hickton said at a press conference announcing the indictment.

Yet Harper's shame may offer a bit of redemption. His hands have often been tied, whether by contract provisions, or policy, or internal politics. But at the end of his career, Harper finally found a police officer he could discipline publicly.