Tamara Tunie and Laurie Klatscher spar and shine in The Roommate 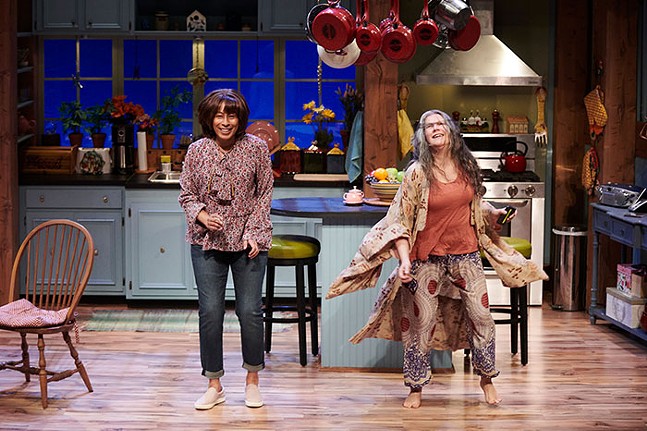 It's summertime at a big old house in Iowa City when Sharon's new roommate arrives. Robyn is a chill hippie from the Bronx, white and bohemian, with boxes full of flowy, flowery getups and weed. Sharon is polite, friendly, and reserved, and though Black and originally from Illinois, she's settled comfortably into the Iowa lifestyle. Her house is very clean and gets plenty of sunlight. She does not listen to music and, though there's a cute new yoga studio in town, she has no plans to go.

Robyn and Sharon's dynamic starts The Roommate off in familiar, though charming, territory. But City Theatre's production — written by Jen Silverman, directed by Reginald L. Douglas, running through March 24 — overcomes the broader clichés thanks to the powerful performances from its two leads.

Tamara Tunie and Laurie Klatscher, who both appeared in Pittsburgh Public Theater's The Tempest last month, are reunited here and showcase an easy, entertaining chemistry. Tunie has years of stage, film, and television experience under her belt (probably best known as medical examiner Melinda Warner on Law and Order: SVU) and that pedigree is clear in her portrayal of Sharon. The character is complex: a mix of saccharin niceties and repressed anger and sadness which Tunie navigates deftly. Klatscher is all-in as the whip-smart, cunning, funny New Yorker with a shadowy past. You can nearly feel the seeds and stems sticking to her harem pants.

After some early ice-breakers — Isn't the Bronx dangerous? You smoke cigarettes? You're a homosexual? — Robyn and Sharon settle into a pleasant cohabiting routine. They each have fractured relationships with their children; neither has much luck getting them on the phone and even when Sharon finally does, her son is brief and aloof. She's not what you might call worldly, mistaking her son's short-haired girlfriend for a lesbian, or "homosexual," a word she pronounces with discomfort and several extra syllables. Thus Robyn embraces the role of tutor, friend, and mischievous coconspirator, aka she buys a record player and gets Sharon stoned. Before long, they cook up a nefarious scheme which sees Robyn unhappily returning to her roots and Sharon getting a little too comfortable with the rush of bad behavior.

It's a classic, predictable role reversal, and like many of the devices in The Roommate, not particularly innovative. The differences between East Coast and Midwest folks, the liberating effects of dancing, and the power of good weed are all well-trodden in terms of stories about mid-life crises and the loneliness of parenthood. But it doesn't matter. The characters are so vivid and lived-in, the acting so powerful, the script so funny and lively, the play doesn't need to reinvent the wheel in its plot. The innovation happens elsewhere.