The group could write a textbook on YouTube-era self-promotion. 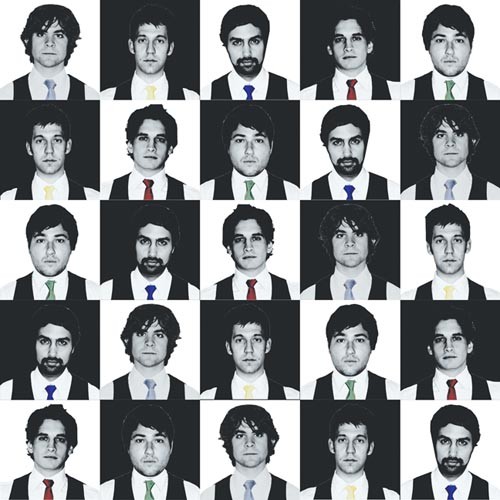 A whimsical band from Michigan whose members dress like Mormon missionaries: Tally Hall

Even the members of a cheeky indie-rock band can suffer the pains of a quarter-life crisis.

Six years ago, Tally Hall recorded its well-regarded debut, Marvin's Marvelous Mechanical Museum, which boasted the geeky humor of They Might Be Giants and the nervous energy of Talking Heads. Since then, the Ann Arbor quintet -- known for its uniform of black slacks and white dress shirts, with each member in a different-colored tie -- has faced a series of classic mid-20s downers.

"We ran into just about every cliché you can imagine," says guitarist/vocalist Rob Cantor (yellow tie).

For starters, Tally Hall struggled under the weight of early expectations. A few years after the band came out of the University of Michigan, "the DJs and the people at the venues [in Ann Arbor] thought we could be this band that did some good for the city," says drummer Ross Federman (who invariably wears a gray tie on stage).

Then they bumped against a horde of peers competing for everything they wanted. Tally Hall relocated to Brooklyn, where "it's easy to be seen as just another band," says Federman.

And then, like every twenty-something entering the professional world, the members found the corporation that absorbed them didn't exactly bend over to accommodate their aspirations. The A&R rep who signed Tally Hall to Atlantic Records quit soon after, and no one else at the label knew what to do with a whimsical act from Michigan whose members dressed like Mormon missionaries.

Atlantic failed to market the reworked and rerecorded Marvin's Marvelous Mechanical Museum to anyone outside the band's established fan base. The label then shelved Tally Hall's second album for a year before dropping it.

That sophomore effort, Good & Evil, finally saw the light of day last June. But all the growing pains did lead to some creative maturation. Songs on Marvin's…, like the self-introductory "Welcome to Tally Hall" and the Caribbean pastiche "Banana Man," were sunny to the point of being droll. By contrast, Good & Evil tracks like "You & Me," or the flat-out beautiful "Never Meant to Know," are more simple and sincere. The band's jumpy rhythm, meanwhile, has been smoothed out into an airy, melodic sound.

And though this may be the ultimate band-signs-to-big-label cliché, it's fair to say Tally Hall might be better off without the label. The group could write a textbook on YouTube-era self-promotion.

Cantor and Joe Hawley, the band's other guitarist/vocalist (red tie), met in a video production class at Michigan, and before starting Tally Hall made video skits together. The band has written, starred in and uploaded a slew of these -- most of which have an absurdist bent. There's a 30-second video of keyboardist Andrew Horowitz (green tie) in a spaghetti-filled bathtub; a 36-second spot of two band mates pulling up to a red light and then engaging in a "honk war"; and a minute-and-a-half of band members sitting in a diner, pelting bassist Zubin Sedghi (blue tie) with questions about "natural ketchup." ("Does it taste better?" "Is it still red?" "Is it a place?" "Does it need to be refrigerated?" "Does it smell good?" "Is it smaller than a bread box?")

Humor is difficult for a band to pull off without sending its stuff to the novelty bin. But Cantor says, "If it's truly part of your personality, there is a way to do it that doesn't make the music seem trivial."

And of course the self-created music videos for Tally Hall's songs are top-notch. "Banana Man" puts the band's singing heads on wooden parrots and shows them dancing over animated flames. It's proof that digital filmmaking allows even an indie band to partake of the eye-popping surrealism once only available to acts with labels willing to fund the next "Sledgehammer."

Tally Hall compiled all of these products into an Internet variety show, produced between September 2008 and January 2009. (Despite all this multimedia dabbling, band members say their live show is strictly dedicated to music.)

This kind of continual interaction with an audience clearly looking for something within a narrow niche has led to a cult following. Some fans have even created a Tally Hall wiki, complete with semi-detailed entries about skits and songs.

Even if none of this helps Tally Hall find a broader audience, or makes their early 30s less troublesome, there are some pleasures in being the wildest thing to come out of Ann Arbor.

Federman says they invited some Michigan bands to a showcase Tally Hall hosted at a New York City club. "We had given bands in Ann Arbor hope," he says. "There hadn't been a lot of bands to come out of Michigan in a while. They looked at us and said, ‘This is cool. These guys have done it. It is possible.' We never had that road map -- which is probably one reason we tried all the weird things we tried."

NOTE: A last-minute lineup change means that Casey Shea is no longer playing this show; SleepyV is playing instead.