It wasn't the type of response that union organizers typically get from management.

On Dec. 2, a dozen or so protesters from the Industrial Workers of the World assembled in front of the Starbucks on Liberty Avenue in Bloomfield -- part of a national IWW campaign to organize the coffee giant and protest the firing of five New York baristas, allegedly for union activity. Very soon after, out came two members of Starbucks management to offer free samples of pastry and hot coffee -- to picketers and passersby alike.

Kevin Farkas, a local IWW organizer and spokesman, took the small red cup from the tray and drank it.

"They did this in Squirrel Hill a couple of weeks ago," Farkas says of a picket on Nov. 24 at the Starbucks at Forbes and Shady avenues. "Some people take the coffee, some don't. Some take it and then dump it out on the sidewalk. It's all about playing the game" of killing protesters with kindness.

When the group first approached the store, managers even held open the door for them. It was a very cordial scene -- until demonstrators started belting out an anti-Starbucks ditty.

"I'm sorry, you'll have to leave," one manager told the group. "You're welcome to do this outside, but not in here."

His message fell on tone-deaf ears. But after the song, the group began an hour-long picket on the sidewalk.

Similar union actions have occurred at Starbucks across the country, as the IWW has sought to unionize the company to secure higher wages, increased staffing, guaranteed hours and safer working conditions for employees. The IWW contends that $7.25 to $7.50 an hour is not enough for an average person to live on, and that the hourly wage becomes effectively lower because schedules are inconsistent and workers are often not given all of their promised hours.

Starbucks offers benefits to even half-time employees -- a rarity in its industry -- as well as retirement plans and company stock purchases. But critics contend that the pay is so low that baristas can't afford to pay for these benefits after they shell out for living expenses.

Bloomfield Starbucks management declined comment but offered a written statement from the company. Valerie O'Neil, spokesperson for Starbucks in Seattle, noted in an e-mail that "the IWW is a union with a small number of members nationwide. A handful of the IWW members call themselves the 'Starbucks Workers Union.' They are not an official union recognized by the NLRB" -- the National Labor Relations Board.

The Starbucks letter says the company is "committed to providing a flexible and progressive work environment," and points to its recent inclusion, for the eighth consecutive year, in Fortune magazine's list of "100 Best Companies to Work For." (Fortune cites Starbucks' benefits as one reason for its inclusion on the list.)

"While Starbucks respects the free choice of our partners [i.e. employees]," the statement concludes, "we firmly believe that our work environment coupled with our outstanding compensation and benefits, makes unions unnecessary at Starbucks."

Starbucks has long touted what it calls a "generous" wage-and-benefits package, which starts baristas at $7.25-$7.50 an hour. While the company bests other coffeehouses, IWW's Farkas allows, he says it could certainly afford to enhance its compensation further.

Last year, Starbucks posted revenues of nearly $6.4 billion, while maintaining 12,000 locations worldwide. According to the June 11 Los Angeles Times list of the top 10 coffeehouse chains in the U.S., Starbucks has 8,000 locations, while its nearest competitor, Caribou Coffee, has only 322. The remainder of the top 10 together total slightly more than 1,500 locations nationwide -- just over 10 percent of Starbucks' size.

"It's all about perspective," Farkas says. "A mom-and-pop coffeehouse or smaller chain coffeehouse can't afford to pay their workers a lot of money. They're just trying to survive. You can't get blood from a turnip, but Starbucks is not a turnip. They're a multi-billion dollar company, and the profits they make should be reflected in the pay of their employees."

According to an article in the March 21, 2006, Wall Street Journal, 42 percent of Starbucks workers currently receive benefits -- slightly less than the 43 percent of employees with benefits at oft-criticized Wal-Mart, as reported in a Feb. 23 Bloomberg News article.

And Starbucks has been accused of playing hardball when its practices are opposed. "I'm out here to protest the firing of five workers who lost their jobs because they tried to organize," said protester Jonah McCallister. In March 2006, Starbucks reached a settlement with the National Labor Relations Board regarding unfair labor practice complaints made for alleged union-busting activity in New York.

Although the company made no admission of wrongdoing, terms of the settlement included a prohibition against promising promotions or other incentives to employees who do not support the union, as well as allowing employees to share pro-union literature and wear pro-union pins.

Two of the fired employees were reinstated with back pay.

Starbucks' statement says union activity played no part in the five employees' dismissal, although the company did not discuss the reasons for the firings. "[P]artners who are separated will not always acknowledge their responsibility and may even try to rationalize their behavior by distorting the facts and publicly attacking the company," the statement says.

Farkas, for one, isn't satisfied.

"After the way that I've watched them treat their employees, it amazes me that they can call them 'partners' with a straight face," he says. 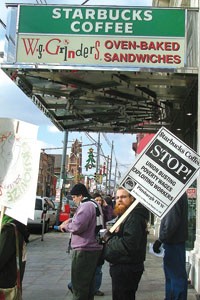