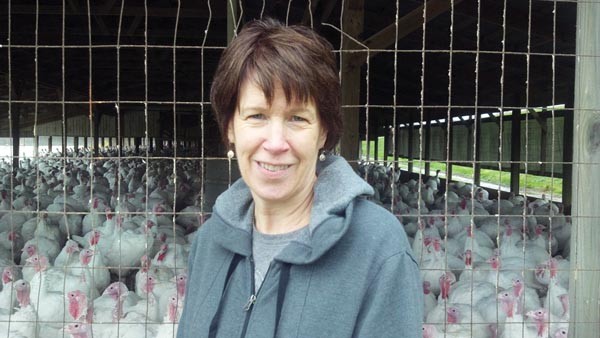 When Beverly Pounds married her husband Tim, she also became wedded to the family's 77-year-old Westmoreland County turkey business — Pounds Turkey Farm. From the start it seemed like the right fit for her.

"Thanksgiving always was my favorite holiday growing up," she says.

The Pounds farm is one of the largest small farms in the area, and does all of its processing on site. Last week 1,100 turkeys were plucked, packaged and waiting on the farm's cooler racks to fill early holiday orders. They'll repeat the process seven more times between now and the week of Thanksgiving, distributing a total of about 8,000 locally raised birds.

"Thanksgiving is tough, but it's a time when you really bond," Pounds says, of the business cycle on the farm, which raises and processes turkeys year-round. The farm also offers other less-holiday-oriented products such as smoked turkey keilbasa, turkey pepperoni and turkey trail bologna.

"I loved raising a family here," she says.

But the turkey business isn't for the fainthearted. Except for rare heritage breeds, turkeys can't reproduce on their own. Farmers order chicks from suppliers who deliver them the day after they hatch. They have to be kept warm, usually in settings 100 degrees or hotter, and protected. And there's always the threat of disease.

"I will tell you, this will be the last year we will be doing turkeys," says Erika Peterson of the Green Circle Farm in New Castle, who started out this season with 130 birds and now has 30. "Turkeys are a terrible, terrible crop."

"If people want a turkey, they should go shoot one," she says. "The wild turkey population is flourishing."

An hour west of Pounds, in Blairsville, Joe Canton, of Canton's Turkey Farm, talks about getting out of the business. He took over his family's farm in 1977. He and the Pounds order their chicks from the same supplier, and "we'll meet together and get to talking to each other while we're waiting on the truck."

He says the Pounds — and his customers — always encourage him to keep on going. A self-described hobby farmer, he does about 2,000 birds annually, he says.