Turkeys are back in Pittsburgh -- and this time, it's personal

Pittsburgh Post-Gazette columnist Brian O'Neill is no war correspondent: He usually doesn't write about anything scarier than the ERA of the Pirates pitching staff. But he still remembers the summer evening when he stared into the face of oblivion.

The feathered, beady-eyed face of oblivion.

This past July, a reader called O'Neill with a tip: A flock of wild turkeys had been accosting bicyclists in Oakland's Panther Hollow. As with any good columnist, O'Neill's ears perked up at the phrase "wild turkey," and he agreed to meet his informant for a bike ride.

"I'd been told it was bad," he says today, a tremble distinctly absent from his voice. "I went into it thinking it wasn't going to be that bad. But they came as advertised."

At this point, O'Neill failed to draw a deep, shuddering breath.

"The turkeys are as big as dogs," he says. "They've got beaks that they're -- they're -- pecking at you with. And you're on a bicycle, so you're relatively unprotected. They come right at you. We had to sort of strategize to get out of it.

"I was once sucked through a culvert in a flash flood," he adds. In terms of danger, he says, "I would put this experience behind that, but ahead of hitchhiking in Nicaragua."

O'Neill was among the first reporters to document a trend that's increasingly cropped up in headlines. Turkeys are being spotted by residents who never expected to see them. The birds have intimidated cyclists and inspired metaphors for gang violence. They've dug up backyards, searching for insects to eat, and threatened to push down property values.

"Turkeys are everywhere now," says Mel Schake, a Pennsylvania Game Commission information education supervisor for the southwest part of the state. "Nobody would have believed this 20 years ago."

Call it a case of turkeys coming home to roost. Until the colonial era, wild turkeys (Meleagris gallopavo) were plentiful in Pennsylvania. And although 150 years of overhunting and logging nearly wiped them out, an environmentalist ethic began taking hold in the 1900s. Forests were protected and hunting restrictions imposed. Game officials began importing birds from elsewhere, in an effort to build flocks to the point where they could be self-sustaining.

Those efforts clearly paid off: At the start of the 20th century, state officials estimated the turkey population numbered only a few thousand; by century's end, Pennsylvania was home to an estimated quarter-million turkeys.

But credit must also go to the pluckiness of the turkeys themselves. Turkeys will eat just about anything, and like deer, they don't need vast woodlands to survive. "Wild turkeys have shown the ability to populate habitats close to humans in areas previously considered unsuitable," reports a draft of the game-commission's turkey-management plan. (The plan spells out a course for managing the turkey population for the next decade: Somewhat ominously for the turkeys, the period for public comment on the plan ends Nov. 24 -- the day after Thanksgiving.) "As turkeys continue to inhabit excellent habitats in proximity to humans, their tolerance to human disturbance may further surprise us."

But then, so may their intolerance. For with familiarity comes contempt ... and as a few local bicyclists have discovered, some turkeys are losing their fear.

Unlike, say, geese, turkeys are shy by nature: Schake says if a human stumbles on a turkey's nest, a hen is more likely to flee than defend its eggs. But in cases where turkeys "become habituated to humans, they can lose their natural fear of us and become a bit more unpredictable. If the animal doesn't have its natural fear of people, you never know what's going to happen."

Turkey/human confrontations are especially common during the spring, when turkeys breed and passions run high. An angry turkey can be a handful: Males can grow to more than 25 pounds, and their legs develop "spurs" -- sharp, bonelike growths that Schake says "can inflict some damage if they flog you." Your only option at that point is to "fight back aggressively."

The best way to avoid such a confrontation is to give the turkeys a wide berth in the first place, he says. "Enjoy the view, but don't get too close," he says. "And we don't recommend you feed turkeys. There's no need for that."

As for those turkeys in Panther Hollow, "I've since heard that one of them has been killed -- hit by a car, I think," O'Neill says. Does he feel any safer? Not really. After all, the turkeys may want revenge.

"They could be coming after me now." 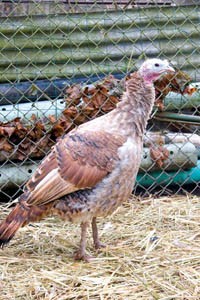 Photo by Heather Mull
A specimen of Meleagris gallopavo