Waste reduction could help save the planet — and tax dollars, too 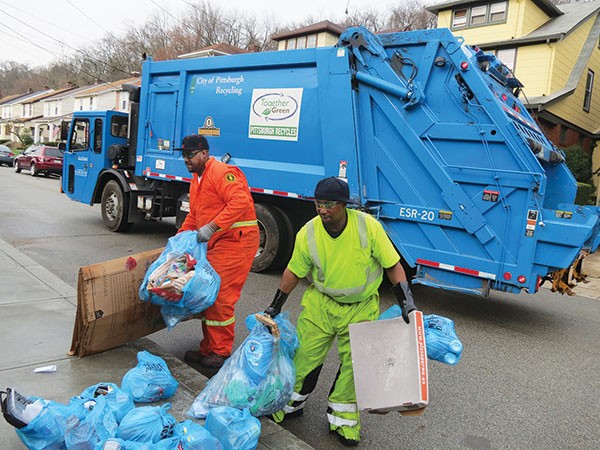 Once every other week, the alley of Swan Way in Morningside is lined with a phalanx of bright blue bags, waiting for a city recycling crew to retrieve them.

Twenty years ago, "You never would have seen this," says Jim Emro, a foreman in the central division of the city's Department of Public Works. "We average 1,200-1,400 stops a day. It's getting to be overwhelming."

Last year, the city collected 16,000 tons of recyclables, generating $700,000 in revenue by selling the material for reuse. But it still spent $2 million to send 95,000 tons of waste to landfills. "We used to collect 140,000 tons a year," says Bill Klimovich, assistant director of DPW. But "we'd like to have everything recycled if we can."

Cities nationwide have adopted waste-reduction strategies that range from charging for the use of plastic shopping bags to trying to obliterate waste altogether, through zero-waste plans and urban recycling and composting centers. Some strategies have been adopted locally.

The Zero Waste Pittsburgh project, an initiative of the Pennsylvania Resources Council, helps connect commercial businesses, municipalities and residents to waste-reduction resources. Tactics include collection events for hard-to-recycle items and workshops on backyard composting. (Visit www.pghcitypaper.com for a list of upcoming events and recycling tips.)

"The idea is to take as much effort as you can to divert materials away from being wasted," says Dave Mazza, regional director of the Pennsylvania Resources Council. "Thinking of these materials as resources instead of waste, which is the approach many are taking these days, encourages finding new and creative solutions."

In the Canadian city of Vancouver, for example, Urban Stream Innovation has developed what it calls a zero-mile urban micro-farm. "We have created a small ecosystem that replicates what an organic small farm does, and encased it in a shipping container," says vice president Wes Regan. The farm captures nutrients of food scraps and composts, using them to grow new crops right next door.

One restaurant in Vancouver has already signed on: The shipping-container farm is located right outside its doors. Eight more such farms are in the works, says Regan.

"Food miles have become an incredible indicator of our carbon footprint, with many items on a restaurant's plate traveling thousands of miles," says Regan. Growing crops nearby reduces that impact, and also saves on fossil fuels used in large-scale agriculture — the world's fourth-largest source of greenhouse-gas emissions, according to the Environmental Protection Agency.

Other waste-reduction strategies focus on diverting household and commercial waste from landfills. The EPA says landfills account for 16 percent of U.S. emissions of methane — the second-most prevalent greenhouse gas.

"Certainly, recycling plays a pivotal role in any waste-minimization strategy," says the PRC's Mazza. But "if you don't generate the material in the first place, you don't have a find way to dispose of it. The 3 R's — reduce, reuse, recycle — are a key component of any zero-waste strategy."

In Cranberry — Cranberry! — residents pay a trash-disposal fee set by how much they throw away. And if you need to throw away a couch or large item? It'll require a $4 tag. "You pay as you need to — that [prevents] people who don't throw away as much from subsidizing those who do," says Lorin Meeder, Cranberry's environmental program coordinator.

Other cities have made more sweeping changes. In Portland, Ore., waste-reduction strategies have decreased carbon emissions by 8.5 percent since 1990 — and changed the public's mindset.

"It's not just about having a place to put your stuff, but changing how you use it," says Portland Sustainability manager Michael Armstrong. Portland's strategies include collecting recyclables every week while collecting disposable refuse every other week — the reverse of what many communities do. "We saw a 38 percent drop in garbage," Armstrong says. "It's really a dramatic change."

In Boulder, Colo., meanwhile, the city will enact a 10-cent fee on all plastic and paper bags beginning July 1. Retailers can keep 4 cents and the city will receive the remainder to buy reusable bags and educate the public. "We dispose of 33 million plastic bags a year in Boulder," says Jamie Harkins, a city-sustainability specialist. But the program is expected to cut disposable-bag use in half in the first year, she says.

And in 2006, Boulder passed a zero-waste plan: a package of programs, policy infrastructure and incentives that would help the city reach its goal of diverting 85 percent of its waste from landfills by 2017. Already between 60 and 65 percent of household waste has been diverted from landfills. And while commercial participation is lagging, the city is experimenting with creative incentives, like offering a subsidy for composting.

Boulder's program "doesn't mandate participation, but you have access," says Harkins. "Theoretically since you can recycle and compost, your trash could be nothing."