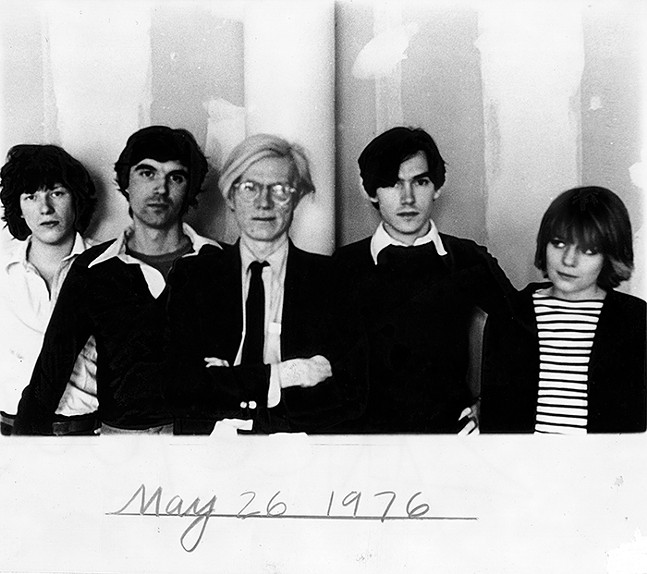 From Chris Frantz’s Remain in Love
Chris Frantz and Talking Heads with Andy Warhol in 1976
If Chris Frantz decided to write a nasty, acerbic tell-all memoir, no one would blame him. In Remain in Love (St. Martin’s), the former Talking Heads drummer recounts more than a few incidents when the band’s lead singer, David Byrne, exhibited boorish behavior, including taking credits for lyrics that Frantz wrote and telling a film crew that Frantz and his wife, bassist Tina Weymouth, were difficult to work with.

But just as a good drummer sets the tone for a band — and careful listeners will hear Frantz’s influence on any Talking Heads’ song — a good writer decides how a story is presented. Instead of accenting unfortunate incidents, Frantz, a graduate of Shady Side Academy, decided to take a more tactful approach.

“The last thing I wanted it to be was embittered or nasty or playing the victim,” says Frantz, who will participate in a virtual conversation Thu., July 23, hosted by Pittsburgh Arts & Lectures. “Because I don’t feel that way. In my life, I’m not embittered. I hope I’m not nasty, and I feel very fortunate that I’ve had the experiences I did have. From the outset, I thought people were expecting me to beat up on the lead singer. But I’m not going to do that because we did such good work together.”

Instead Frantz wrote, as the title suggests, a love letter: To his parents, for allowing him to pursue his dreams, first of becoming an artist and then a musician. To his teachers, especially David Miller at Shady Side Academy, who “opened my eyes to the idea that anyone can be an artist,” he writes. And most of all, to Weymouth. Frantz includes a scene in which he finds Weymouth on the campus of Rhode Island School of Design, heartbroken after breaking up with a boyfriend, and a bit bleary from a combination of blackberry wine and cold medicine.

Frantz takes her home and tucks her into bed. The next morning, after making breakfast, Frantz turns on the TV to find Al Green singing “Love and Happiness” on Soul Train.

“I totally [took it as a sign],” Frantz says. “The main reason I wrote this book was to show my love and admiration for Tina, which remains very strong today. We just celebrated our 43rd anniversary, and next year we’ll have been together for 50 years. Tina is so important to my life, to my whole existence.”

Talking Heads produced a body of work that remains sui generis – there’s no other band, before or since, that sounds quite like the quartet of Frantz, Weymouth, Byrne, and guitarist/keyboardist Jerry Harrison. And most, if not all, the soulful elements came from the rhythm section of Frantz (who grew up listening to WAMO in Pittsburgh) and Weymouth. If Byrne’s musicality was akin to the artist Piet Mondrian — brilliant abstractions of straight lines and right angles — Frantz and Weymouth were the colorists, brightening the songs like Van Gogh and Frida Kahlo.

“I’m in agreement with you,” says Frantz, laughing, when asked if this comparison is close to reality. “But I have to be careful what I say about my former lead singer. I don’t want it to turn into a pissing contest. But one thing I have noticed is his solo work, with all due respect, is missing a great rhythm section.”

Despite the slights and the self-aggrandizing behavior of the “lead singer” — Frantz really does sound reluctant to criticize Byrne — there was one overarching reason why he and Weymouth stayed in Talking Heads. The music, the songs, the tours, and the sense that the band was doing something new and impossible to repeat, held them close, and might have held them forever if given the chance.

“We realized early on if you’re dealing with David Byrne, you’re dealing with a guy who really doesn’t understand where he stops and other people begin,” Frantz says. “He doesn’t understand how a collaboration really works. He’s happy to collaborate with somebody, but at the end he says, ‘Oh, what a great song I’ve written.’ We realized early on this is how his brain was wired. I do believe he does know the difference between right and wrong, but there’s something in his brain that says, ‘That’s OK David, we don’t give a shit.’”

Growing up in Pittsburgh 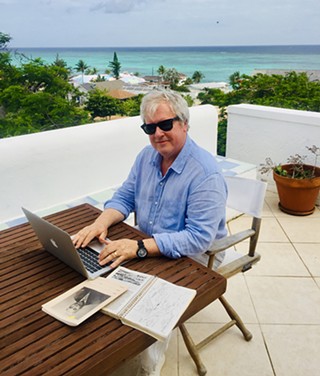 Author’s photo from Remain in Love’s inside book jacket
Chris Frantz at work on Remain in Love
Born in 1951, Chris Frantz moved to Pittsburgh at the end of first grade. His family first lived in Ross Township, then O’Hara Township, and he remembers buying albums at Kaufmann’s flagship store Downtown, including The Beach Boys’ Surfin’ USA and the soundtrack for Goldfinger. Frantz also attended poetry readings hosted by the International Poetry Forum, and he seems to remember every class, teacher, and fellow student at Shady Side Academy.

But when Talking Heads started touring, no local promoters would book the band. According to Frantz, Talking Heads performed at Antonino’s Pizza Parlor, the Pittsburgh Playhouse, and the Stanley Theater for the groundbreaking Stop Making Sense tour. Each time, the band handled its own promotions; Pittsburgh based promoters, including DiCesare Engler Productions, declining to book the group.

“The night that we played the Stanley Theater (Aug. 13, 1983), they were doing a show that night, Night Ranger at the Civic Arena,” Frantz says, laughing. “The next day, or maybe two days later, the Pittsburgh Post-Gazette or The Pittsburgh Press wrote about what a great show Talking Heads had done, but no mention of Night Ranger. I guess [local promoters] knew their business, but they had no sense of adventure, those guys, when it came to promoting concerts.”


A conversation with Chris Frantz
A video chat with WESA’s Bill O’Driscoll, hosted by Pittsburgh Arts & Lectures. Thu., July 23. $37, includes a copy of Remain in Love, with a bookplate signed by Frantz, shipped by Mystery Lovers Bookshop. pittsburghlectures.org