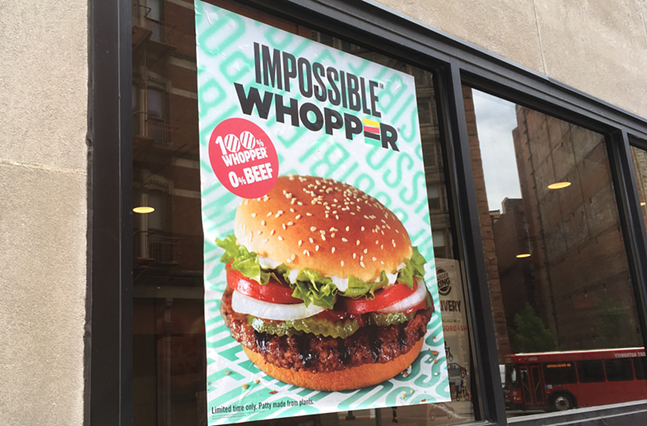 CP photo: Amanda Waltz
Impossible Whopper advertisement on Downtown Pittsburgh Burger King restaurant
As a vegetarian, my fast-food options are limited to bean burritos at Taco Bell and sad, pre-packaged salads. That is until Burger King announced plans to launch an Impossible Whopper, a version of its signature menu item made with a plant-based patty.

I became an Impossible Burger convert last year when I tried the new meatless product at Burgatory. After years of eating various dry, crumbly, or all-around unsatisfying vegetarian burgers, it came the closest to the real thing, with the texture, taste, and smell of grilled beef.

So I was ecstatic when Burger King started testing the Impossible Whopper in April, and, after a successful reception, announced plans to expand it to all U.S. locations by Aug. 8. Seems like Pittsburgh got its Impossible Burgers early, as I spied a sign at a Downtown BK location advertising its availability.

Produced by the Redwood City, Calif.-based company Impossible Foods, the Impossible Whopper is advertised as being made from a combination of soy and potato proteins, coconut and sunflower oils, and binding agents. Nutritionally, the BK website says each patty comes in at 240 calories and 14 grams of fat. It also features a long list of vitamins and minerals, including 2,350 percent (!) of your daily recommended amount of thiamin, a water-soluble B vitamin. 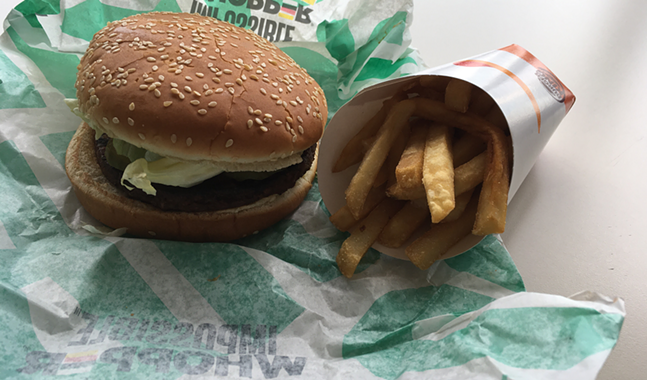 CP photo: Amanda Waltz
Impossible Whopper and fries
Like any Whopper, it came on a toasted sesame seed bun with the usual toppings of tomatoes, lettuce, mayonnaise, ketchup, pickles, and sliced white onions. (I forewent the cheese.) At first bite, the burger was a bit dry, especially compared to my Impossible Burger experience at Burgatory and other restaurants, which tend to be juicier. I chalked it up to the reality that this is, in fact, a fast-food burger, and therefore not held to the same standards as a gourmet burger joint.

Beyond that, however, the patty had the same texture and smell of charbroiled beef. As a late-life vegetarian/red meat-fed farm kid, I can attest that any carnivore would be hard-pressed to tell the difference. It definitely tastes like beef — overly cooked beef, but beef nonetheless. By the final few bites, I can say that, overall, I enjoyed the first Whopper I’ve had in a good, long time.

The Impossible Whopper rollout is still in its early stages, so I’m eager to see if the restaurant ends up adjusting cooking times for the item so it avoids that hard, flat hockey puck texture. I’d also be curious to see how BK deals with separating it from other menu items, as the chain cautions that the patties are cooked on the same broiler as the regular burgers and chicken. So if you’re not a garbage vegetarian like me and are more strict about your dedication to a truly meat-free diet, you might want to avoid the Impossible Whopper for now.

If not, better get one while you still can, because they're available for a limited time.