He says: “I liked bringing people together and introducing people to something different, which I still do. That’s probably the main reason I still do what I do.” 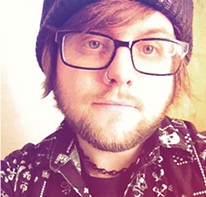 Company: Don’t Let the Scene Go Down on Me!
Title: Founder

He said it: “I had an urge, being in a small town to bring acts I wanted to see through my town.”

There are many music promoters in Pittsburgh. All are integral to bringing a certain type and level of music to the city. For the music issue, we’re shining a light on two promoters who are crucial to new and developing talent: Josh Bakaitus and Brett Shumaker.

Josh Bakaitus: It was right around 2000 when I started to do pittbands.com without me ever going to club shows. That was my local music website. I just was interested in it because my friends and cousin played in a local band. I’d list Metropol shows and Club Laga shows and 31st St. Pub shows and I’d list those on the site. And I had never been to any of those places. I just thought it was awesome.

Brett Shumaker: I went to high school in West Virginia. It was a much smaller scene. Some friends told me about a show that was happening in a firehall, and I loved it. I still have a scar on my hands from my first mosh pit at that show. That was it for me, I was like, “This is where I want to be.”

JB: I had the idea to do a local music festival… it was at the American Music Cafe in Murrysville. I did that, and I realized after it was booked I’d never booked a show before and I should probably book a practice show before it. So, I did that. Like two weeks before that show, I booked a show in Charleroi at the VFW hall, which became a thing after that. I liked doing something in my school that was off the wall, that wasn’t sports or the norm. I would flyer in my high school at lunch time, and it worked.

BS: I was in and out of bands for a while. And then I was in one particular band for two years and I was booking our shows, and the band broke up. So, I just kept booking shows. I also had an urge, being in a small town to bring acts I wanted to see through my town.

JB: I did a couple local shows at American Music Cafe — and I liked bringing people together and introducing people to something different, which I still do. That’s probably the main reason I still do what I do.

BS: [First booking] was Dan Potthast, the singer of MU330 and Dan P and the Bricks, he plays keyboards for Jeff Rosenstock right now; and Rick Johnson from Mustard Plug — that was my first show. They were heroes of mine. Growing up a ska fan, that was a big deal for me. They stayed at my house and we played Mario Kart and ate fish sticks — it was great. And that was like, “I can do this.”

BS: I think it was Frankie Cosmos. That was the first time I was talking to a real agent and they sent me a contract and all that. I was like, “This is getting serious now.” I wasn’t always good about it in the beginning. I’d forget to send the contract back [laughs]. I’m a little bit better about being professional now.

JB: All-ages shows are the backbone of the culture of what we do. We’re in a weird period right now where a lot of venues don’t want them, but my argument is that all-ages shows are our future. Our future is not the 21-plus crowd now. The youth that will continue to grow and want to come back when they’re 21.

BS: I’m trying to collaborate more. I have been talking to a lot of other independent promoters about starting a new thing, which would be called At the Gig Promotions. A lot of us are tired of doing it all on our own, and it’d be nice to have some help. So, we were like, “We’re all doing it already, why not just do it together?” So hopefully we’ll be rolling that out in the next few months.

JB: I’m learning to be more patient. When we started Mr. Smalls Presents, I wanted to continue to go at the pace that I was going at. So, we went really hard really fast; in the first year and four months, we’ve done 400 shows, which I think is pretty incredible. But now I’m, like, “Let’s slow down for a second, regroup and refocus.” What I’m seeing now is I want to focus a little closer to every show, so if that means booking less shows, I’d rather do that and make each show better.

BS: I want to make shows more of an experience. I want to bring in vendors and food if I can. I want people to want to come to shows. I want more of a community.

JB: Stay in touch with promoters you want to work with and booking agents and bands you’d like to work with. Eventually, you will get a cool show, and when that show goes well you’ll get more opportunities.

BS: Promote! I feel like a lot of people who start off book the show, make the Facebook event and that’s it. But you really need to grind, especially these days. Diversify your lineups, and don’t feel pressured to put a million bands on one show.