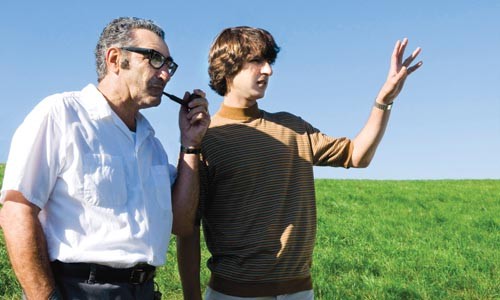 The Sixties began on Nov. 22, 1963, in Dallas, Texas, and ended less than seven years later, on May 4, 1970, in Kent, Ohio. Before Dallas, we lived in an attenuated '50s haze of denial, and soon after Kent State, we lost hope. In between, we witnessed the fall of a president, the rise of the sexual revolution, a foolish war, and Woodstock, a concert that did for youth culture what George Bush did for international terrorism.

Woodstock happened 40 years ago this month, and we still can't quit it. In Taking Woodstock, director Ang Lee (Brokeback Mountain) and screenwriter James Schamus do their lovin' best to flash us back to a time when sex wasn't fatal (although some abortions were) and people still had the audacity to keep hope alive. The year before, we lost Bobby and Martin, and we needed a pick-me-up. Woodstock was one big freakin' last blast even if you didn't drop acid -- although let's face it, most people did.

It shouldn't matter too much that Lee has nothing original to say about Woodstock. (Did Spielberg teach us anything new about the Holocaust?) His movie is fun if you just relax and enjoy it, a gentle situation-dramedy version of something that's been mythologized way out of proportion anyway.
Sure, nobody died and everyone looked after each other. But things were still a mess: too many people, too few accommodations, and no one to clean up afterward, with greed at the root (if not the heart) of it all. "Everybody's gotta chase the money," says the concert's young promoter, Michael Lang (Jonathan Groff), when it's over. "We're all probably going to sue each other. But we'll figure it out." He was right all around.

Taking Woodstock (the title is part pun, part double entendre) never quite takes us to Woodstock. We see the stage only once, from very far away, through the acid-bright miasma of our protagonist, 34-year-old Elliot Teichberg (Demetri Martin). Elliot came home a few years earlier from New York City to help his parents (Henry Goodman, Imelda Staunton) salvage their crumbling dump of a motel in the upstate New York burg of White Lake. It's about an hour from the bigger, wealthier Woodstock, and just down a barely paved road from Bethel, where a dairy farm owned by the shrewd milkmonger Max Yasgur (Eugene Levy) is destined to host the concert.

Elliot is a bit of a dreamer. He has a design business that does well enough (when people pay him), and he dreams of bringing culture to his archaic town. So he secures a permit to stage a weekend of classical music and rents his family's barn to a penniless avant-garde theater troupe rehearsing a modern staging of Chekhov, which climaxes with a naked romp and a bunch of dreamy talk about liberation.

Enter Lang, whose shaggy hair, shirtless vest and waggish smile belie his dexterity at handling the Manhattan suits who wasted $1 million before having their permits revoked up the road. Then Elliot waves his permit at the planners, securing a place in history for the misnomer we now call "Woodstock."

Lee speckles his movie with a few personal stories, the largest being that of Elliot's mother, a shrill and domineering Russian Jew who whips out allegations of anti-Semitism when she doesn't get her way. Elliot is pals with Billy (Emile Hirsch), a Vietnam vet struggling to hold on to reality. Elliot suppresses his furtive homosexuality -- he was at Stonewall the year before, and more out -- but he finally can't resist a husky construction worker, and when Vilma (Liev Schreiber), a husky drag queen, shows up and charms his parents, the cycle of cliché is complete.

Taking Woodstock is never less than charming and occasionally even tender, but it's never much else, and it needn't be. In real life, Elliot Teichberg was Elliot Tiber, who wrote a book about it. But stylistically, this is no docu-drama. There's ample nudity and copious storytelling with split screens, certainly meant to evoke Michael Wadleigh's famous 1970 concert film. And nobody tries to imitate or lip-synch the music: We get only a few classic tunes heard off in the distance, plus the obligatory joy of sliding down a hill of mud to Canned Heat's Woodstock anthem "Going Up the Country."

The acting is as comfortable as it needs to be, with Schreiber especially fine in long blond hair. His chest is shaved, thank goodness, but his voice barely bothers to fem it up. Hard to believe he could pass as a woman? No harder than believing Kathleen Turner does. Groff, a Broadway phenom making his feature-film debut, is relentlessly puckish (not much of a stretch). And if Martin never quite seems at ease in his role, perhaps it's because his characterization reminds me so much of his incisive standup comedy. So it may just be a matter of perspective (a matter which, one character tells us, "shuts down the universe and shuts out love").

I wonder how people will react to Taking Woodstock. Will it disappoint? Will it cause, uh, flashbacks? Does anyone even care? As I left a screening of the movie, I heard someone remark, "The multiple cameras reminded me of Lee's work in The Hulk." I'm sure they did. I'm also sure now that The Sixties are over. May they rest in -- I'm smiling here --