Taking stock in the jazz world 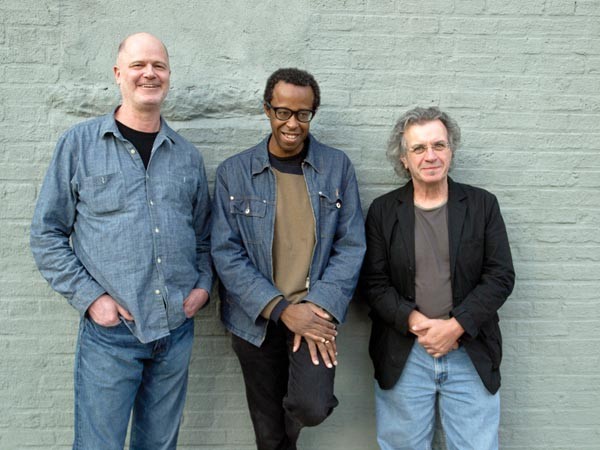 Photo courtesy of Peter Gannushkin
Something that really exists: Matthew Shipp (center) and his trio

April is designated as Jazz Appreciation Month, and while some might argue that affection for the music continues throughout the other 11 months of the year, the upcoming 30 days offer a chance to truly reflect on the scope of this music. The work of Thelonious Monk, Duke Ellington and Charlie Parker sounds as vital today as it did when it was recorded more than half a century ago. But the nature of jazz requires that it keep moving forward, and indeed it has never stopped evolving — not when Ornette Coleman debuted in New York, not when Miles Davis went electric, not even when WDUQ-FM changed its name and format.

In the coming month, several local concert events pay homage to jazz, including some performers who are far removed from the post-bop standard of jazz. But each of these performers brings excitement to bear on the music, keeping it linked with what pianist Cecil Taylor once called "the eternal flow of the river."

Pianist Matthew Shipp has spent the better part of two decades adding to the legacy of his instrument, both as a prolific bandleader and sideman, best known in the latter category for his time with saxophonist David S. Ware. Shipp doesn't mind being described as a "free jazz" practitioner, because his music often sidesteps tempos and chord changes. But don't ask him to pin his work down himself. "I don't know what I do," he says. "If people want, they can call it jazz. They can call it music, they can call it crap. I don't care. I'm not caught up with the word ‘jazz,' no. I don't consider jazz anything that really exists. So, in fact, I don't believe there is a thing as jazz."

The "Is jazz dead?" debate seems to pop up every few years, more often to fill paragraphs rather than to draw a conclusion. Trumpeter Nicholas Payton started a firestorm last year with a lyrical blog post that answered the question in the affirmative. ("Jazz separated itself from American popular music," he wrote. "Big mistake. The music never recovered.") Shipp, for his part, has been labeled as a "rhetorical bomb thrower" for comments he has made against jazz elders such as Herbie Hancock.

But speaking from his New York apartment, the mild-mannered pianist isn't looking for a scuffle right now. Jazz is "a useful word to throw out there to talk about phenomena better," he explains. "When you use that word, it covers Louis Armstrong, Cecil Taylor, John McLaughlin and Kenny G. And what all those people do are different things. Sure, it's all related to something that we call music — people play notes on an instrument. But when you get down to it, those people all do completely different things … and we invent words and categories to talk about them."

He doesn't forsake the history of the music. In fact, when Shipp was 12, he saw pianists Ahmad Jamal and Nina Simone on public television in the same week and decided that he wanted to switch from classical music to jazz. He admired other players, like Oscar Peterson, but he never set out to imitate him or anyone. "When you start learning to play jazz, you're thinking, ‘Well, how do you improvise?'" he says. "That's a very daunting task. You just try to get stuff under your hands from everywhere. And usually once you get in, you start collecting material from everywhere."

The best musicians are the ones who perform without regard to categories or the status quo. Shipp's music can range from thunderous stabs at the keyboard to passages that are downright lyrical. Though he typically works in acoustic settings, he experimented in the '00s by blending his style with DJ sampling and grooves, for a fairly successful hybrid labeled jazztronica. Last year he and bassist William Parker, a longtime collaborator, teamed up with two MCs in the project Knives From Heaven.

Earlier this year, Shipp released a new trio album, Elastic Aspects, a year after a double-disc of live performances. Despite being so prolific, the pianist never sounds as if he's repeating or reworking the past glories of his vast discography. Over 13 tracks, drummer Whit Dickey and bassist Michael Bisio get moments in the spotlight away from Shipp, in addition to times when the pianist locks in with the drummer for some wild excursions. There is even some Monk-like plucking of the strings on one track, and some delicate ballad moments elsewhere.

The trio's current lineup has played together for just over two years, and they have grown as a unit. "Whit and I have been playing together a long time," Shipp says. "With some drummers, no matter how brilliant they are, they try to superimpose their world of music, and sometimes you can only phrase certain ways with certain drummers. But with Whit, I feel complete elasticity. I can go in any direction I want to at any point.

"And Bisio is just one of the greatest bassists on the planet. He's a monster."

When asked whether he pushes himself to make every album different, Shipp laughs self-deprecatingly. "I don't know if I push myself or it's the nature of who I am," he says. "I don't wake up in the morning trying to be different. I guess I get bored. Music's always changing on its own. Even if you play the same thing two times, it's different. The second time, it doesn't fall the same way as the first time. That is the nature of the music."