Taking Back Sunday welcomes change without changing its shape

"It's a rare thing when you can bring an audience like that together in one place, enjoying the same thing at the same time."

If you're of a certain age, you may fondly recall Taking Back Sunday from a mid-'00s, high school- or college-era mix CD or, more recently, an unfortunate karaoke performance. But whether you find the emo-hardcore band's older hits laughable or irresistible, the band represents an enviable legacy. Taking Back Sunday doesn't need a punctuation-mark gimmick or rap verse to remain current. Which is why, in an age when guitar bands are a dime a dozen, TBS still packs venues with audience members who range from their teens to their 30s.

"It's a rare thing when you can bring an audience like that together in one place, enjoying the same thing at the same time," says lead vocalist Adam Lazzara. "Obviously, someone who's 16 is gonna have a totally different set of problems than someone who's 32. [But] for that hour and 15 minutes, it's not about that."

It's certainly an impressive feat for a band that deliberately pursues cabin fever, traveling to remote spots in Texas and West Virginia to write. Lazzara definitely does not listen to post-hardcore exclusively — he owns up to a fascination with pop-country — but rather approaches writing and listening as independent activities. 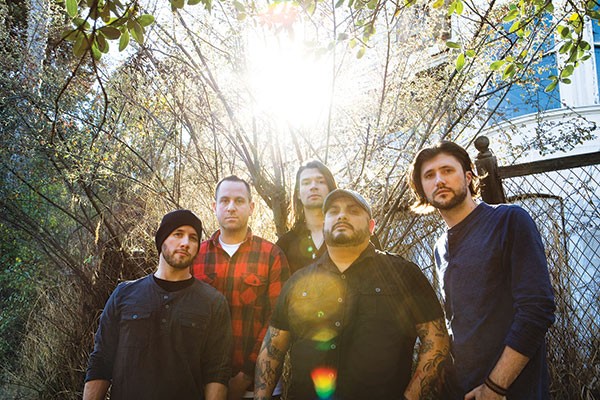 Photo courtesy of Natalie Escobedo
Changing with the times, but only sort of: Taking Back Sunday

Is it songwriting in a vacuum? Maybe. But Taking Back Sunday's chief talent is its ability to tackle different topics through a consistent lens, the band's sound maturing without losing its dramatic quality. (The refrain from "Beat Up Car" — "I won't let you kill yourself" — comes to mind.)

The band's latest release, Happiness Is, presents a tribute to the past as it looks forward. The brilliant crescendos of "They Don't Have Any Friends" have the driving, upbeat structure of TBS's earlier material. It's followed by "Better Homes and Gardens," in which we get a frustrated look at long-term commitment. Like a commentary on life experience, it starts out with one mellow guitar, teasing its build until the third minute of the song.

Relying more on harmonies this time around, Lazzara has maintained the impressive vocal range that's made him an ideal frontman for an emo band. Guitars, drums and occasionally violins rise up to meet him, rather than holding back to emphasize the lyrics. It's a production choice that lets listeners absorb the melodies, even when they're not belting the chorus.

Lazzara acknowledges the popularity of mid-'00s songs like "MakeDamnSure" and "Cute Without the E," but points out that the impetus of these songs has changed as the band has grown older.

"That's what's so cool about music in general," he says. "It can change with you."