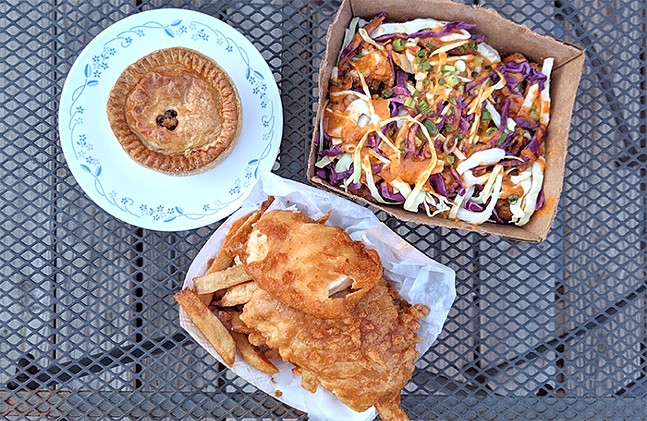 CP photo: Maggie Weaver
Fish and chips, chicken pie, and Thai chili chicken tots
There are two restaurants on the South Side dedicated to classic British fare: The Pub Chip Shop and Piper’s Pub. Piper’s Pub serves up a more formal taste of the British Isles — along with a devotion to football, aka soccer — while The Pub Chip Shop, its sister restaurant, focuses on British street food.

The Pub Chip Shop is described as a “proper takeaway and pie shop,” and the fast-casual menu features cuisine classics: bangers n’ mash (sausage and mashed potatoes with gravy), a variety of fried meats with chips (fries), a mix of pies (basically stews enclosed in pastry), and more. During the day, the shop offers breakfast sandwiches (which I have been told will save you from even the worst hangover), breakfast tot boxes, and hosts Just Good Doughnuts, a yeast-raised doughnut joint.

I went for three dishes on a recent trip: fish and chips, a chicken pie, and Thai chili chicken tots.

Because of the pandemic, The Pub Chip Shop closed what limited indoor dining they had, shifting to takeout only. While this wasn’t anything new for me, I was unsure how the fried fish, packed in a paper bag, would fare on the 15-minute drive back to my house.

Amazingly, the only thing that was affected was the temperature, and even that I didn’t mind. The hand-battered haddock didn’t pool in grease (though the bag was soaked), but stayed light and crispy on the trip. My chips, which were rightfully thicker than the shoestring fries of American cuisine, stayed fresh and crunchy.

If you’re a fry lover, these chips are a must. I prefer them to normal fries. There’s a bit more potato, and with every bite, the thick edges crunch with a delicious, fried edge.

Haddock, a typically meaty, sea-tasting fish, was light with the addition of the cracking, fried breading, which gave texture to the flaking fish. The batter was oily enough to cut through the thick fish without sitting heavy in my stomach; I didn’t feel the typical fried-food fatigue halfway through. A dip in tartar sauce added a bit of tang to the otherwise simply-flavored dish, rounding it out.

My Thai chili chicken tots — made out of potato balls, which were like tots but softer and bigger with the texture of latkes — were topped with fried chicken, napa cabbage, chili sauce, and green onion. It was a nice break from the fried, all-beige fish and chips. Spice punched through the sauce, adding a zing to the piles of potatoes and crispy chicken that weighed down my paper takeout container. Cabbage finished off the dish with a bit of color and a fresh, veggie crunch.

I’ve indulged in season upon season of The Great British Baking Show over the past few months, and I’m sure the chicken pie would have won Paul Hollywood over with its flaky, crispy crust — no soggy bottom in sight.

The crust was a perfect pairing for the stuffing, an incredibly flavorful, punching-with-black-pepper chicken stew. There were times when I felt the crust was a bit too dense, but that’s what the gravy was for.

There were so many pieces of The Pub Chip Shop that I loved, but I think what surprised me most was the quality. I went in with low expectations, guessing that fried fish and a stew-filled pie from a takeout shop wouldn’t hold to the standards of dine-in. But it did!

On my next visit, I’m putting the Chip Shop breakfast sandwich hangover cure to the test.