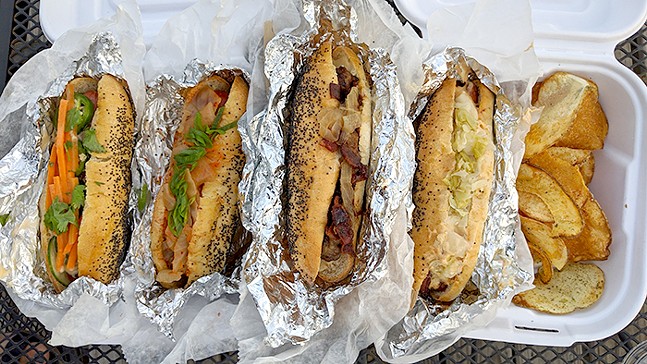 CP Photo: Maggie Weaver
Hot dog carts aren’t known for their culinary prowess. If I’ve learned anything from romantic comedies and their infamous New York City hot dog stands, it’s that most carts operate with a two-ingredient formula: a hot dog and a bun.

This is not the case at Lorelei, East Liberty’s Alpine-inspired eatery.

Lorelei’s sausage kart, developed in mid-April as a creative way to expand takeout offerings amid the ongoing pandemic, boasts eight dogs. Creations range from the classic formula — a “Plain Jane” dog, with ketchup, mustard, and sauerkraut — to the everchanging dog of the week, recently the Seattle dog, dressed with the fixings of a jalapeño popper: cream cheese and fresh jalapeños, plus caramelized onions and sriracha.

I had a choice of four options for each dog — the classic frank, kielbasa, a beer bratwurst, and a vegetarian carrot dog. I chose Lorelei’s classic frank to go with my two Asian-inspired dogs: the Banh Mi, sporting bright jalapeños, vegan sriracha mayo, cucumber, and pickled carrots and radishes; and Korean, with peanuts, gochujang, and kimchi. It seemed fitting to go with a kielbasa for the Reuben dog, matched with Russian dressing, sauerkraut, gruyere, and caraway seeds, and a beer bratwurst for the Beiermeister, slathered with beer cheese and topped by onions and bacon. Every dog is placed on a house-baked bun, either traditional sesame or a vegan pretzel bun.

I preferred Lorelei’s franks over the other sausages. They weren’t the average hot dog expected from a cookout or a ballgame; they were all-beef and didn’t taste overly-processed, boasting a pleasant, cured flavor. There was just enough snap to give a satisfying pop with each bite through the casing.

The Asian-inspired dogs were by far my favorites. The cured flavor worked quite well with the slightly sour and spicy banh mi toppings, creamy sriracha mayo balancing out the pickled veggies. I found it to be — a word that I never considered a hot dog to be — refreshing.

Though hot dogs were the obvious star of the kart, I indulged my Pennsylvania-dutch heart by adding a beet-pickled egg to my meal. If you’ve never had a pickled egg, don’t knock it; the vinegar adds a nice sour tang, the beets an earthy sweetness.

Truly, Lorelei’s sausage kart can’t really be called a cart — it’s actually a pick-up window from the restaurant, with no wheels in sight. But cart or no cart, Lorelei is churning out top-notch dogs.