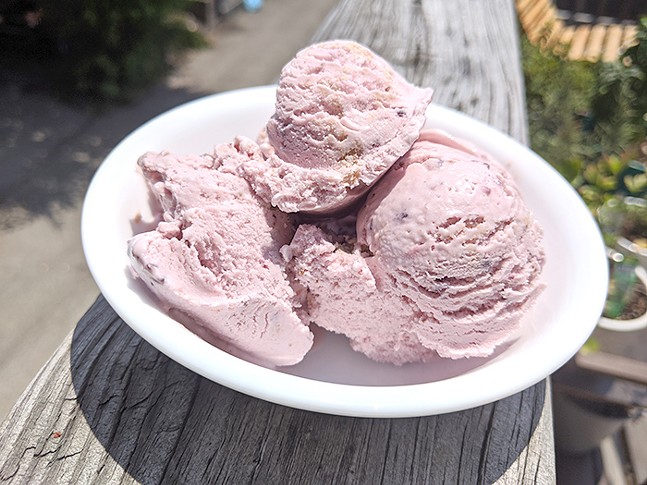 CP Photo: Maggie Weaver
Berry crunch ice cream from Happy Day Dessert Factory
The soft opening for Happy Day Dessert Factory, a new North Side ice cream shop, was set for March 16. If you’re keeping tabs on the pandemic, that means 20-year-old Galen Moorer Jr., owner of the shop, planned to launch his business one day after restaurants were ordered to close their dining rooms.

Moorer, however, remained in good spirits. He opened for takeout almost immediately, pushing his grand opening back by two weeks. In late March, the young entrepreneur told Pittsburgh City Paper that, though this wasn’t the opening he imagined, the future for Happy Day Dessert Factory was “looking extremely bright.” He wasn’t wrong.

His menu is extensive. It starts with standard ice cream: traditional, housemade, hard ice cream, and held in giant tubs behind a glass window. The flavors — which rotate regularly from a bill of over 50 — can be anything from black raspberry to Danish cream.

A scoop of Moorer’s chocolate Reese’s peanut butter cup proved to be the perfect median between the two flavors. It was surprisingly creamy, save for the occasional nib of chocolate or streak of peanut butter. A scoop of berry crunch was light and refreshing, similar to a black raspberry but with actual berry pieces in it. It was reminiscent of a freshly baked berry crumble, dotted with small pieces of a cakey, pie-like crust. 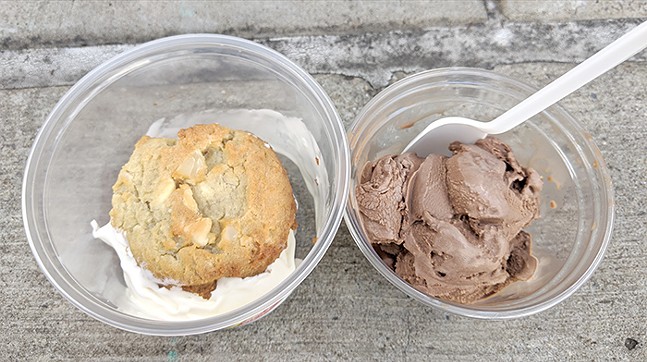 CP Photo: Maggie Weaver
Ice cream sandwich and chocolate Reese’s peanut butter cup ice cream
The custard was not too sweet, and instead, mellowed out the almost over-the-top cloying cookies. A basic vanilla paired well with the crunchy, golden brown edges of the cookies, seeping in ever-so-slightly, as if they had been lightly dipped in a glass of milk.

Then, there are the signature treats. Combine one of the thirteen flavors of italian ice (a non-dairy option) with a twist of custard and it makes the stacker. Moorer’s father used to own the Rita’s franchise on East Ohio Street, so Moorer is well accustomed to mixing custard and italian ice. Blend it, and the treat becomes an ice-like shake. Throw a few toppings in with soft-serve, hard ice cream, or water ice, mix it together, and you have one of the shop’s twisters.

If Happy Day Dessert Factory’s neverending menu of flavors and combinations seems a bit intimidating — I am known to panic order if I encounter a large menu — I suggest starting small. Go for a scoop of Moorer’s top-notch ice cream; it’s so good, it doesn’t need much else. 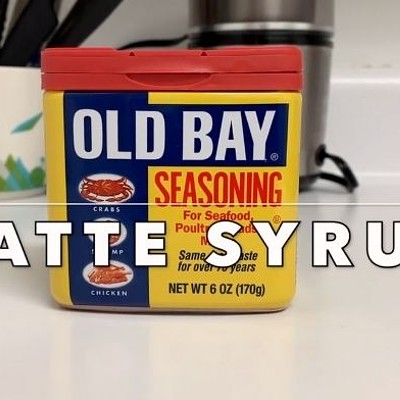