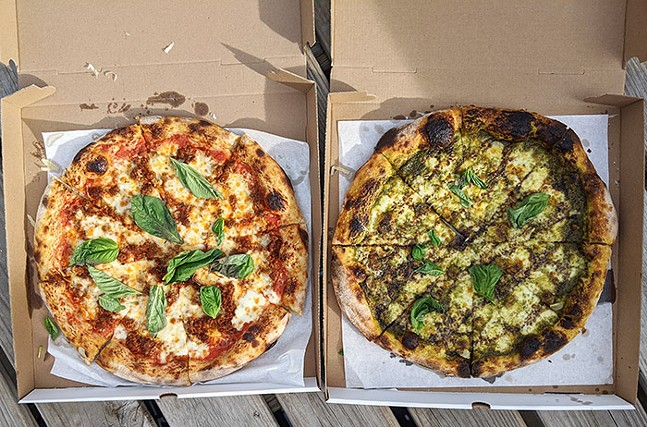 CP photo: Maggie Weaver
The Archer (left) and The Greenfielder (right)
There were a number of places I had been eagerly waiting to visit as Allegheny County moved to the yellow phase and restaurants, many closed since March, began to reopen. Driftwood Oven was at the top of my list.

The Lawrenceville pizzeria is known for its sourdough crust, a sharp turn from the doughier, thick crust that appears in many “Pittsburgh-style” pies. It’s thin, though not thin enough to crunch and crumble with every bite; the bottom remains bendable, often flopping under the weight of toppings even after it’s been spotted with char from the oven. The outer edges, ballooned in a classic style, sport gorgeous bubbles from the fermented dough. It’s a chewy crust, as a good sourdough should be.

And with Driftwood open again for takeout, I decided it was time to treat myself to a weeknight pizza party (of one). I chose two of the 16-inch pies (they also offer a 12-cut Roman style, which has a thicker crust), the Archer and the Greenfielder, and for dessert, a salted dark chocolate rye cookie.

The pizzas were polar opposites. The Archer was simple, dressed with cheese and spicy Italian sausage. It was a classic combination, simple and savory. The straightforward, fresh, tomato sauce was a great match for a cheese blend of pecorino and mozzarella; the saltiness of the pecorino balanced out the sweeter components from the sauce. The sausage — though not too spicy — added a nice kick of flavor to the simple pie. A few leaves of fresh basil rounded out the pizza nicely.

While the Archer was savory, the Greenfielder provided some sweetness. It was a spectacular pie, with arugula and basil pesto matched by garlic, mozzarella, and buttercup cheese, then finished with a drizzle of aged balsamic vinegar. The pesto gave a nice zing to the mild cheeses, but it was the sweet, tart touch from the zig-zag of balsamic that made the pie.

Driftwood’s desserts — a list now limited to a few cookies and Leona’s Ice Cream Sandwiches — should not be overlooked. The salted dark chocolate rye cookie was soft and fudgy like a brownie, the potent punch of sea salt quickly giving way to a rich, sweet, mouth-puckering bitterness of dark chocolate. (If Driftwood ever makes a pizza out of cookies, I will be first in line to try it.)

There is a reason Driftwood Oven has been my most anticipated yellow-phase reopening. Its sourdough-based pies aren’t comparable to anything else in the city; I’d eat just about anything on top of a Driftwood Oven crust.
Driftwood Oven. 3615 Butler St., Lawrenceville. driftwoodoven.com