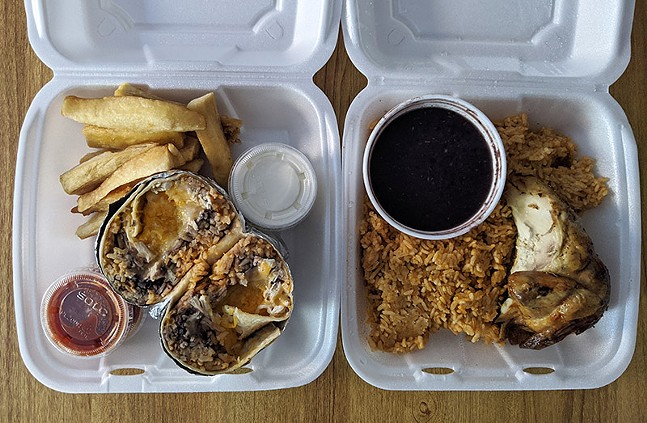 CP photo: Maggie Weaver
Chicken burrito, yucca, and chicken with rice and beans from Chicken Latino
Before sending in my takeout order to Chicken Latino, I wondered if it would be enough. But when my meal arrived — a quarter chicken with rice and beans, a soft chicken burrito, and some crispy yucca, I knew my doubts were unfounded. This was enough food for two people to eat over a number of days.

I was surprised that the restaurant’s Styrofoam takeout didn’t break under the weight of a pile of rice that formed a bed for the chicken. And the burrito, wrapped neatly in foil, was similar in size and weight to a small dumbbell. Thankfully, Chicken Latino's generous portions weren't compensating for a lack of quality. Chicken is the restaurant's signature for a reason. The Peruvian flavors are unbelievable; the chicken is peppery, carrying spice from the skin all the way to the bone. Its supporting elements — rice and beans — are mild without being bland, which allows the chicken to shine.

The burrito, labeled as a Mexican dish, followed suit. It involved similar elements, wrapped up in a tortilla and paired with a massive chunk of melted cheese. The chicken was more tender outside of a burrito, but any dryness was not noticeable with a touch of sour cream and salsa. Flavors were mild, but the burrito hits texture just right, the melted cheese adding a grilled cheese-worthy gooey-ness.

Chicken may be the restaurant’s signature, but there’s something else I’ll always go back for: the spicy green chili sauce. This sauce is like wasabi in that a little goes a long way. It’s meant to be mixed with mayonnaise to mellow the spice, because it’s got quite the punch. Despite the spice, it’s delicious. The underlying freshness of chilies is still palatable even through the heat. It brings a zest and brightness much needed for the chicken’s subtle flavors, and mixed with mayonnaise, provides a great dipping sauce for starchy, crispy yucca.

Leftovers aren’t always my first choice, because more often than not, they are left to sit in my fridge until I throw them out. But this has never been the case with leftovers from Chicken Latino. If you’re looking for takeout that will last you days — and that you’ll want to keep eating — Chicken Latino is a perfect choice.Chicken Latino. 2100 Broadway Ave., Beechview. chickenlatino.net