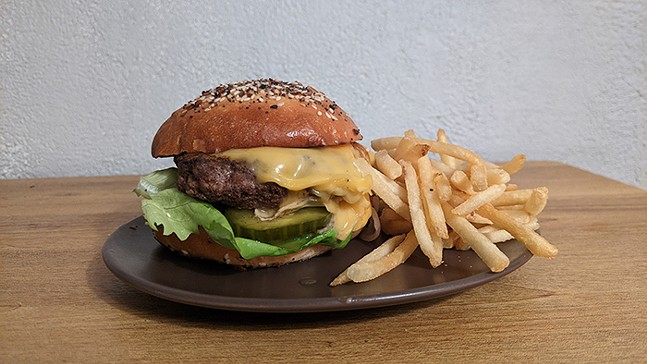 CP Photo: Maggie Weaver
The Bistro Burger
Poulet Bleu was one of the city’s biggest restaurant openings of 2018. It marked the first restaurant the Richard DeShantz Restaurant Group opened outside of Downtown, turning a small building in Lawrenceville into a bright, intimate, French bistro.

Many in the city practically vibrated with excitement about the new eatery — more specifically, the discovery of Poulet Bleu’s bistro burger. It was all I saw across social media, the dish plastered on the Instagram pages of food bloggers, repeatedly named everyone’s “new favorite burger.”

I decided it was time to see what this bistro burger was all about.

In normal times, the dining room at Poulet Bleu is the perfect spot in which to cozy up, taking refuge in one of the cush corner booths, or sitting a bar’s width away from the chefs cooking in an open-concept kitchen. But this kind of intimacy is not what I’m looking for in the middle of a pandemic, so I opted for burger takeout.

(It felt a little wrong to order just the bistro burger from the list of otherwise-elegant dishes. I couldn’t get the scene from Passport to Paris, the Mary-Kate and Ashley Olsen movie I watched on repeat as a kid, out of my head: the twins horrify their Parisian chef by sneaking fast food burgers and fries into his kitchen, after being equally-horrified by the chef’s escargot. Cue the chef’s line, “Le McDonald’s? In my kitchen? I think I might faint.”)

There were a few things that I found immediately notable when I opened my cardboard takeout container. First, the sandwich was small compared to those that you can get from burger-only restaurants. No stack of bacon or onion rings making the handheld impossible to eat; it was just the right height for a big bite.

Second was the “American” cheese; the yellow, processed, cheesy goodness oozing out of the bun in waterfall fashion. I love that Poulet Bleu decided to go with what many consider to be the lowest-of-the-low cheese offerings. It was rich, savory, and unassuming, taking the burger out of the “too fancy” category that the rest of the restaurant often falls into.

The burger lived up to its hype and then some. The patty, which I ordered medium rare, was salted just under the point of being too much; the flavor lingering on my tongue with a tangy, savory taste. Stringy onions added an acidic cut to the almost overwhelmingly rich meat, which further mellowed out with the still-crispy lettuce and bite of bread and butter pickles. A surprising, heavily umami aioli, not listed on the menu, gave me the same savor of a mushroom. The burger, finished with an everything seasoning on the top of the fluffy brioche bun, came together seamlessly.

It was paired with shoestring-style fries, the type you want to eat in handfuls. They were as thin as the name implies, which I'd typically trade for a thick, British-style fry. But these were crisped superbly, not too crunchy or burnt on the edges, perfect with a quick dip in ketchup.

Poulet Bleu’s bistro burger makes the restaurant feel more approachable. I’ve dined inside, pre-pandemic, absorbing the trimmings: slow, methodical service, overpriced entrees that taste better because of the experience, water and wine glasses that never go empty. The bistro burger takes these charming, yet sometimes overdone, touches down a notch, making me feel like I could spend an evening alone at Poulet Bleu with a burger and a glass of wine, feeling perfectly in-place.