CP Photo: Hannah Lynn
Fried chicken sandwich from Smoke
For most of this quarantine, I have been cooking all of my meals every day. I get takeout about once a week, as a treat. I don't use food delivery services and don't have a car, so I get what's in walking distance. But I think often about the last meal I ate out before lockdown times, a huge and tasty plate of nachos at Smoke in Lawrenceville. The chips were delicious and the toppings were perfectly proportioned. Like many restaurants doing takeout-only, Smoke has altered its menu. Now, instead of the tacos (and nachos) for which the restaurant is known, Smoke is offering a short menu of sandwiches and burgers.

My boyfriend desperately wanted one of the burgers after he saw a friend on Twitter say that it was "the best burger I've ever had." Smoke is about a 15-20 minute walk from my house, which is not far, but is a little too long of a distance to carry home hot takeout. So instead, we picked up sandwiches from Smoke and ate in the park, which is much closer. It was a brisk but sunny day, and it fooled us into thinking eating takeout in the park was a good idea.

I got the Ultimate Fried Chicken sandwich, which comes with fried chicken, bacon, cheese, red onion, and "Fresno mayo." I went with no bacon because I thought it would be too much. But even without bacon, the sandwich was tall. Normally, I expect a fried chicken sandwich to have one patty or chicken piece with toppings. But this sandwich had two huge chicken pieces on top of each other and it was obviously too much chicken. My boyfriend got the Special Burger, which was a perfectly reasonable size and height. It came with a beef patty, French onion dip, and pickles. They both came with fries.

Due to the extreme size of the chicken and generally sauciness of the sandwiches, I do not recommend that anyone eat these in a public park like we did. The takeout bag did not come with napkins, which is not Smoke's fault because 99% of its orders are probably someone picking it up and taking it home. But then there we were, sitting at a picnic table covered in French onion dip sauce and mayo and grease, trying to fend off the squirrels that got shockingly close, and debating whether grass or the side of the takeout carton was a better napkin. It was not the first time I've felt feral during the pandemic, but it was certainly the most public.
click to enlarge 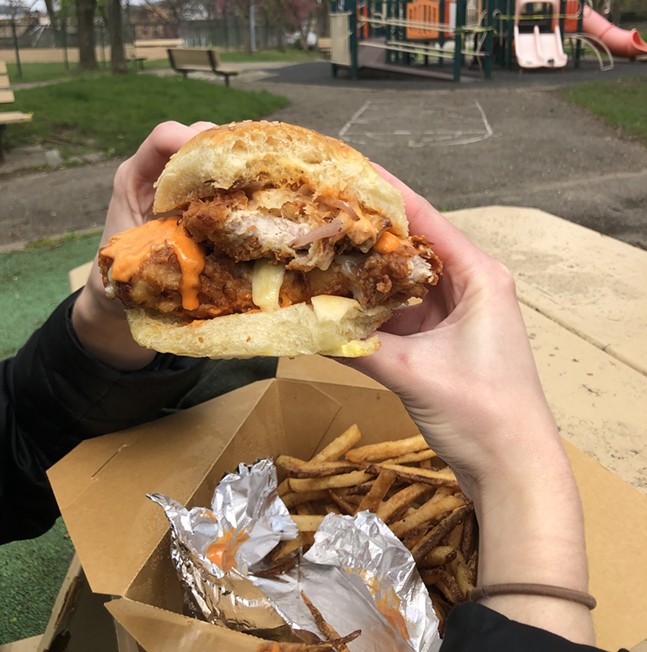 CP photo: Hannah Lynn
It's a lot of chicken
Hugeness aside, the chicken sandwich was crispy, well-seasoned, and overall very tasty. The sauce had some slight heat, and the sauteed onions added a nice sweetness. The bun, however, got a little soggy and probably wasn't built to hold such a cumbersome sandwich. The fries were crispy and salty, and came with a dipping sauce that wasn't quite ketchup, but had a tomatoey, barbecue flavor.

The burger, arguably the reason we got takeout in the first place, also had a tasty, rich sauce cut by tangy pickles. I'm not a burger person, but my boyfriend said the meat was cooked perfectly. By the end of the meal, he said, "I would die on a cross for this burger." He agreed, though, that it was also a little too wet.

Both sandwiches were washed down with a cold cup of fresh lemonade. It was just tart enough and not too sweet. If you're looking for some big honkin' sandwiches to chow down at home, Smoke is a great option. If you want a nice lunch to eat in the park, maybe just pack a thin, dry sandwich at home.