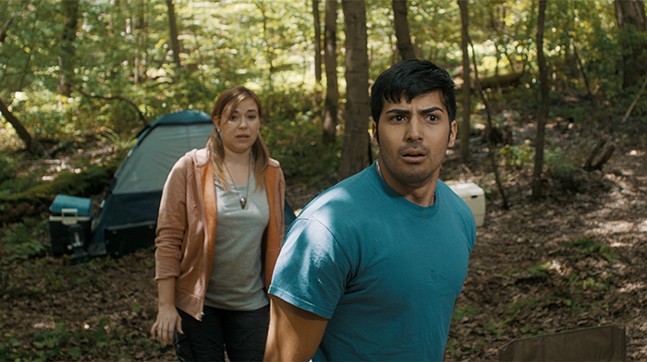 Photo: courtesy of Lance Parkin
Andreas O’Rourke (right) and Krista Graham (left) in The Boonies
Filmmaking is hard work, especially when your movie involves both hiking in the wilderness and escaping murderous backwoods cannibals. Add in a low budget, and you have The Boonies, a locally shot horror film, which will be out on streaming and VOD platforms on April 20.

Directed by Lance Parkin, who co-wrote the film with his creative partner Matt Schultz, The Boonies follows a group of friends who must fight for their lives after crossing paths with a group of flesh-eating killers during a hike in the Appalachian woods. The film was shot in 2019 in the Pittsburgh, Johnstown, and Somerset areas.

Parkin, who lives in Millvale and whose past projects include the supernatural comedy web series Theo and the Professor (now available to view for free on Amazon Prime), says The Boonies was inspired by his love 1970s horror, namely Last House on The Left, The Texas Chain Saw Massacre, and The Hills Have Eyes.

“I loved the gritty and raw feel they had,” says Parkin of those horror classics. “So this movie is heavily influenced in terms of story and visual to have a kind of modern '70s aesthetic.”

The project began around six years ago when Parkin's director of photography and filming partner Jeffrey Smee saw a Craigslist post from two Johnstown-based men “looking to help fund a film.” Those two men, Brian Balog and Dave McMillan, would become the film’s producers after Parkin pitched them his idea.

“They had some experience in the industry and they were just looking to sort of support creative people, so it was a great arrangement,” says Parkin, adding that they gave him and his crew “a ton of creative freedom” and “respected the art.”

After its completion, the film was picked up for distribution by Indican Pictures in Los Angeles, with Lionsgate handling the physical release. It also saw sold-out screenings at the Westwood Plaza Theatre & Cafe in the Johnstown area.

The film serves as a testament to the small, yet active filmmaking community in Pittsburgh, particularly when it comes to the horror and comedy genres. The cast includes Ben Dietels, who previously worked with Parkin and Schultz on a comedy he co-directed called Bergeron Brothers: Wedding Videographers. Dietels, who runs the Pittsburgh-based production company BPO Films with partners Ryan Lintner and Blake O'Donnell, says Parkin called him up and suggested he play one of the villains.
click to enlarge 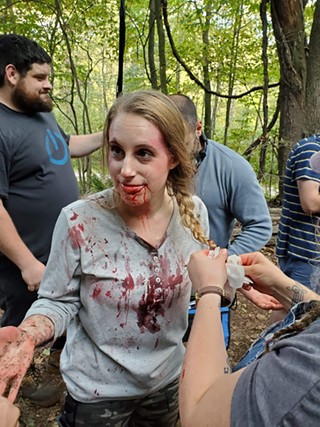 Photo: courtesy of Lance Parkin
Actor Jess Uhler behind the scenes on the set of The Boonies


“I was immediately intrigued because I don't normally get asked to play bad guys in movies,” says Dietels. “I mostly get cast in comedic roles playing a nerd of some sort, so this was something drastically different for me.”

He compares his character, Cloyd, to Chop Top from the cult horror sequel The Texas Chainsaw Massacre 2, describing the character as “terrifying but darkly funny at times.”

Overall, Dietels says making The Boonies was like going to “adult summer camp,” with everyone having a blast shooting in the woods around Johnstown.

“I had a lot of good laughs on that set and met some great people that I've continued to work with on other projects,” says Dietels.

But, he says, it wasn’t all fun and games, as the role required a lot of effort.

“It was exhausting playing Cloyd,” says Dietels. “I had to scream and holler and put myself in this weird ‘inbred psychopath’ headspace for multiple takes doing horrifying things to my fellow castmates. The third act gets pretty heavy, but I still found a way to shoehorn a couple laughs in there. I think people might laugh at some of the stuff Cloyd does because it's just so uncomfortable.”

Parkin agrees that making an indie horror film in any capacity requires a ton of work. He says the biggest challenge for him was having to wear many hats – in addition to writing, directing, and producing, he also assisted with editing and did all the sound design. And there was the issue of having to do the editing and sound design during the COVID-19 outbreak, starting from December 2019 and continuing into the early summer months.

“And it was easily a few hundred hours of work,” says Parkin. “So this movie's entire post-production was basically the height of the pandemic.”

Still, Parkin believes the stress was worth it. He described how audiences at the Westwood Plaza screenings would “audibly react and groan and laugh at all the right moments, which was immensely satisfying.”

Overall, he feels grateful for being part of a tight-knit group of local film professionals and actors who believed in the project and were willing to see it through.

"Independent film making in itself is just one big challenge, a series of problems that you have to come up with solutions to," says Parkin. "In reality, though, we had a very talented cast and crew and we all gelled together amazingly."

The Boonies will be available on most streaming and VOD platforms starting Thu., April 20.