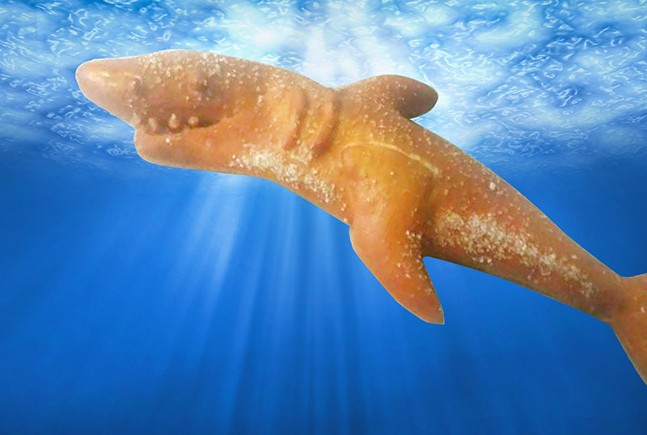 Shark pretzel by The Pretzel Shop
While COVID-19 has canceled sports, for the most part, there's still one event that Americans can rally around — Shark Week. And what better way to celebrate this watery spectacle — airing this year from Sun. Aug. 9 through Sun., Aug. 16 – than to have your own social-distance hangout complete with shark-themed snacks.

Launched in 1988 by the Discovery Channel as a way to educate viewers about the feared predators and to boost conservation efforts, Shark Week has become one of the few anticipated summer TV specials. This year, Shark Week promises more than 20 hours of programming, including the return of Air Jaws, a documentary show capturing the terrifying majesty of Great White sharks breaching.

Thankfully, businesses in Pittsburgh and beyond are capitalizing on the event's long-running success by catering to the tastes of local shark lovers.

For the last eight years, The Pretzel Shop in the South Side has been making and selling shark-shaped soft pretzels.

“I think it started around the same time that Shark Week became a really big thing, and we thought, 'Hey, we can do something really cool for that,'” says Pretzel Shop employee, Caitlin Trocano.

The Pretzel Shop sharks are offered in two sizes — a large one that clocks in at over a foot long, priced at $10. The smaller “baby sharks” are four- to six- inches long and cost $1 each.

“We've been selling a lot more of the baby sharks just because they're individual and they're really cute,” says Trocano, admitting that the mega-popular kid's song may also have something to do with their appeal. “It's been in my head all week,” she laughs.

Trocano adds that, while they typically make the pretzels just for Shark Week, they can be ordered any time of the year. Besides sharks, they also make other shaped pretzels, including dinosaurs, Minnie Mouse, and unicorns, for events like birthday parties and baby showers.

The shark pretzels will be available in-store, but Trocano encourages customers to order ahead of time.

Nothing pairs better with pretzels than beer, and Pittsburgh breweries and beer distributors are happy to provide. While you won't find many shark-themed beers in this, a river town, there are some that pay tribute, in some part, to the sea, such as the new Solar Submarine dessert sour from Grist House. Most area breweries also offer curbside pickup or delivery for customers wanting to social distance.

Those who would rather stick to the beer distributor can seek brands like LandShark beer or take a cue from Quint in Jaws with a pack of Narragansett.

For those with a sweet tooth, Bethel Bakery recently promoted its 3D shark cakes ahead of Shark Week. The four-layer cakes – priced at $75.50 — come in a variety of flavors and serve up to 25 people, according to the Bethel Bakery website. The cakes are now available to order online (all orders must be placed 48 hours ahead of time).


Shark Week starts this Sunday! Celebrate next week with our 3D Shark cake. This is an ORDER ONLY item, please note we...

In addition to the 3D cake, the bakery, which has two locations in Bethel Park and North Strabane Township, also sells shark-themed cupcakes, cookies, and donuts.