Taillon, Rivero and Bell are the core pieces of the Pittsburgh Pirates’ future

If you buy jerseys featuring the names of these three guys, you should get your money’s worth. 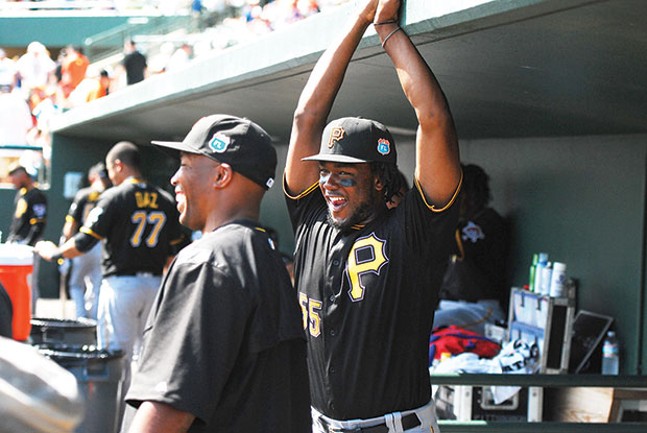 Baseball’s trade deadline passed Monday afternoon, and we can be thankful that it’s not like it used to be. It used to be the time of year when fans turned their attention to Steelers training camp and said goodbye to their favorite baseball players. Jack Wilson, Jason Bay and Freddy Sanchez were all sent off to clubs with higher baseball aspirations. In return, guys like Jeff Clement and Andy LaRoche came to town along with a slew of nobodies who petered out in the minors. It was even worse a time for fans who shelled out their money to buy authentic jerseys of players who no longer played here. The front office had deemed your purchase irrelevant.

But now things are different. It’s fun hearing that the Pirates landed an average player with a halfway recognizable name and respectable track record. And this season has seen the emergence of three young players who are so good, you may want to invest in a jersey again. This is the younger generation of players, all born way back at the end of the 20th century — a time known as “the ’90s.” Andrew McCutchen, Jordy Mercer, Ivan Nova and Josh Harrison are all 30 now, and such graybeards can’t be trusted to be the future.

Those old-timers were born during the Reagan administration. Gregory Polanco and Gerrit Cole are part of the youth movement as well, but both were already established major-leaguers at a young age. Polanco is still a work in progress, and the general consensus on Cole is that he inevitably will become too expensive for the Pirates. Everybody expects him to sign a $20 million-a-year contract with somebody else in the next couple of years. So maybe don’t buy Cole’s jersey, but if you buy one featuring the names of these three guys, you should get your money’s worth.

Baseball executives have known about him since he threw a no-hitter in high school while striking out 19. Tommy John surgery, a sports hernia, and even cancer have tried to derail Taillon, but he’s overcome all of them. He was born in Florida, has Canadian parents, went to high school in Texas, and has a surname that sounds French. Taillon is 6’5” and gets the radar gun up to the high 90s; he’s got a circle curve that cuts diagonally across the plate. When he’s on, it’s fun to watch. The heir apparent to the position of Pirates ace has almost one full year under his belt.

The guy knows how to make an entrance, as he slugged a grand salami in just his second major-league plate appearance. Bell’s career was in doubt early, when he badly injured his knee while playing in Charleston with the West Virginia Power. From there, he cruised through Bradenton, Altoona and Indy before arriving here last July. The Pirates’ revolving door of has-beens and never-weres at first base may finally be over. The Pirates haven’t had a steady, reliable first baseman since Jason Thompson. That was before old man Mercer was even born. Giving Bell $5 million to not play football at the University of Texas is some of the best money the Pirates ever spent. Especially if he’s producing and playing at first base three years from now. It’s nice to look over there and not see disasters like Gaby Sanchez, Lyle Overbay, Ike Davis, Casey McGehee, Travis Ishikawa, Eric Hinske, Matt Hague, Corey Hart or Michael Morse. Also, if you bought any one of those jerseys, it’s your fault, not the Pirates’.

Rivero is having maybe the greatest season by a Pirates reliever since Mark Melancon, for whom he was traded. He’s better than Melancon so far, and maybe the best since Rich “Goose” Gossage brought his nasty stuff out of the Three Rivers bullpen back in the 1970s. Rivero’s ERA and WHIP are both at 0.70. Having either one of those numbers that low this late in the season is truly remarkable. Scouts and fans alike are enamored with the radar gun, and Rivero gives the people what they want as he routinely hits triple digits. If the Pirates can hang in and win the division, they have a closer who is as good as, maybe even better than, anyone in the game right now. The thing that most upsets Pirates fans is the dreaded blown save. The blown save causes a Tourette’s-like reaction from fans who say horrible things about the pitcher who’s just ruined the game. So far this season, Rivero has not blown one game. Nobody has uttered his name in combination with a swear word all season long. At times, he is simply untouchable. Closers come and go in the majors, so there’s no guarantee he’ll be here long. So, let’s hope the Buccos can turn things around and give him a chance to close games in October.