Despite the fact that Pittsburgh Penguins officials have been absent for months of community benefits agreement (CBA) negotiations with public officials and Hill District representatives, Penguins senior consultant Ron Porter doesn't agree with the characterization that the team is ignoring the community.

"We are at the table when we feel we can contribute to negotiations," he says. "We're largely following the lead of the city and county."

Besides, he adds, "The Penguins are tied to the government entities through contracts," so Mayor Luke Ravenstahl and County Executive Dan Onorato actually represent the hockey club at the negotiating table.

"No, we don't represent [the Penguins]," Onorato says.

"By no means do we represent [the Penguins]," agrees Ravenstahl.

"That's precisely where the dilemma is right now," says Carl Redwood, chairman of the One Hill Coalition, a grassroots movement of more than 100 community groups seeking a CBA. "The mayor and county executive can't deliver anything on behalf of the Penguins."

Since last summer, One Hill has been fighting for an agreement that would contractually ensure that when a new $290 million hockey arena is built for the Penguins, the long-neglected Hill District benefits as well. Because the arena is supposed to be built primarily with public subsidies, the coalition is asking for a neighborhood grocery store, a multi-purpose center and a community-improvement fund, among some other requests outlined in its "Blue Print for a Livable Hill."

After months of negotiations, the holdup is clear. According to Hill District representatives, the CBA fight is a matter of gaining the upper hand -- and neither the Hill District nor the local government officials have it.

"Ravenstahl and Onorato gave up their leverage" when they signed off on the Penguins' arena lease, Redwood says. That's why the Penguins have consistently been absent from CBA negotiations since the fall, and, more importantly, why there's still no agreement, he adds.

"Negotiations right now aren't headed in the right direction," Redwood continues. "The Penguins have carefully stepped out of negotiations."

Although Redwood says team officials in March attended their first meeting in months, "Their attitude hasn't been serious enough."

Ravenstahl and Onorato agree that the Penguins are crucial to negotiations. But Hill District representatives say there's very little the mayor and county executive can do to persuade the hockey club to attend discussions and contribute to the community.

"Their hands are tied," Redwood says. "The Penguins got what they wanted."

Now, as development plans pass through the city's approval process, and as Penguins officials demolish existing structures in hopes of breaking ground on the arena in June, Hill District representatives are left contemplating the political nature of CBA negotiations.

"This particular process is an interesting one, to say the least, because it has a lot of political conversations happening," says state Rep. Jake Wheatley, whose district includes the Hill. "Once the [government officials] signed the lease, their position was clear."

That position, according to Redwood, is one of "complicity with the owners of the Penguins."

He claims the mayor and county executive have an "'old boys'" kind of relationship with Penguins officials, where they're concerned more about the hockey club than about the communities they represent.

"The bottom line is that we need politicians to support the community against these billionaires," Redwood continues. "They have to get with it."

Wheatley says he warned city officials against signing the arena lease with the Penguins. He says that private companies, like the Penguins, "always shield themselves by using public officials."

Hill District resident Ray Cherry wishes the Hill District could do the same. But at this point, he knows that's a stretch ... and just as unlikely as getting all three parties to reach a deal.

"If they were going to do it, they would have definitely done it by now," the 43-year-old says, standing on Centre Avenue across from the Hill District's Hill House. "From the start, I thought it wouldn't happen. It's just a lot of lip service."

Similar sentiments are easy to find throughout the Hill District, considering the mayor and county executive's first effort at a CBA was derided and then literally torched in January by angry neighborhood activists who argued that their plan was not a CBA at all. [See "Fiery Response," City Paper, Jan. 10.]

According to the mayor, all of One Hill's "Blue Print" planks are still being negotiated. "[W]e're getting close. We're starting to narrow down the final issues," Ravenstahl says. But, he adds, there are two points of contention, regarding arena jobs and the community-development fund.

Both Ravenstahl and Redwood declined to discuss specifics of the negotiations.

City, county and Penguins officials have publicly announced their support for a neighborhood grocery store, a community center and a few other requests, but they have argued against allocating funds to community groups in the Hill from the get-go. [See "History Repeating," City Paper, Dec. 20, 2007.]

Still, jobs and money represent a significant chunk of what Hill District negotiators are seeking. So compromising on those two issues could prove difficult -- especially because, Redwood says, "It's all about the Penguins ... and they don't listen."

Already, the coalition has filed a lawsuit challenging the city planning commission's approval of the new arena's master plan. While a hearing in Common Pleas Court for that appeal has yet to be scheduled, Redwood says that the group could file another appeal if the planning commission votes to pass the arena's project development plan later this month.

"The only way for sure that we would rule a lawsuit out would be if we had a CBA," he says. The consequences for [the city, county and Penguins officials] will continue to get bigger and bigger."

Such threats, according to Hill District resident Raymond Burgess, wouldn't be necessary if the negotiating parties could simply reach an agreement.

"A CBA can ease the relationship between the Hill District community and the city officials," says Burgess, 58. "It's always been two different worlds. We have to bridge that gap."

Heather Mull
Despite the lack of a CBA with Hill District groups, preparation for a new hockey arena -- such as the implosion of the old St. Francis Hospital -- continues.
click to enlarge 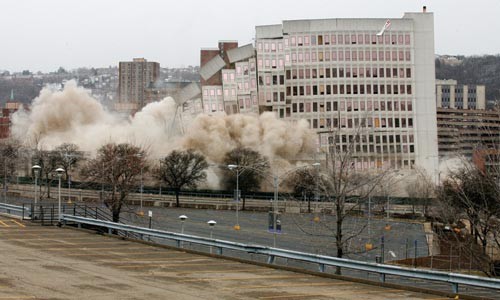 Heather Mull
Despite the lack of a CBA with Hill District groups, preparation for a new hockey arena -- such as the implosion of the old St. Francis Hospital -- continues.
click to enlarge

Heather Mull
Despite the lack of a CBA with Hill District groups, preparation for a new hockey arena -- such as the implosion of the old St. Francis Hospital -- continues.