It is a welcome addition to the local array of authentic, regional Chinese restaurants 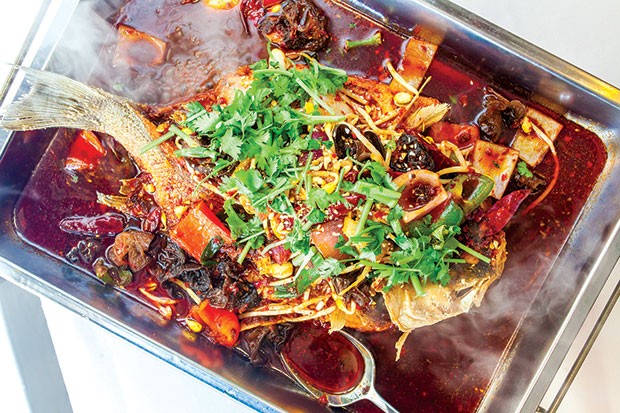 For many years, “Szechuan” in America mostly denoted a category of Chinese-American food only slightly more spicy than the mild, courtly food of Canton. We’re excited to see that changing as American diners develop appetites for less assimilated versions of foreign cuisines and, locally, a larger Chinese population seeks the authentically vibrant tastes of home. Now, when a restaurant opens under the name of Szechuan Spice, it’s a promise we take seriously.

Like so many hopeful new establishments, Szechuan Spice is located at the juncture of Shadyside and East Liberty, in the lightly modernized dining rooms of the former Jimmy Tsang’s. We arrived expecting not MSG-laden brown sauce, but brilliant red chili oil and Szechuan peppercorns.

Szechuan Spice is hardly the first in our fair city to offer these flavors, but in the field of tasty Chinese food, newcomers are always welcome. Its menu includes plenty of the kind of Chinese-American fare familiar to former customers of Jimmy Tsang’s, but we gravitated toward the Szechuan pages, while also sampling a couple items from the sushi bar. As ever with Chinese menus, dish names tended toward the epigrammatic, so, beyond a handful of dishes with which we were already familiar, we ordered what sounded good and waited eagerly to see what would arrive.

Under the heading “Flaming Pan, Spicy Wok,” there were almost a dozen options. Our choice, spicy rabbit, arrived neither a la flambé nor in a sizzling pan, but in a small wok balanced atop a Sterno-like flame such that it bubbled and simmered at the table. Bone-in chunks of meat were chewy, but not tough, with a texture similar to that of a lean piece of pork. The only vegetables — long, skinny bamboo shoots and slices of crunchy lotus root — provided contrasting crispness, all in a brothy sauce that was both floral and spicy.

A nearly opposite texture pertained to the braised-beef noodle soup, where large chunks of beef were so utterly tender that even the fat and collagen were soft and unctuous. The thick wheat noodles may have been softer than ideal — Asian noodles shouldn’t be al dente, but neither should they approach mushiness — but the luscious meat and simply seasoned, deeply beefy broth were irresistible.

Dan dan noodles are among our very favorites, but we didn’t love Szechuan Spice’s version. All the components were there — seasoned minced pork, chili oil, ground peppercorns, even the welcome addition of skinny baby bok choy — but the scanty ingredients left some noodles naked, and the flavors never quite cohered.

On the other hand, the scallion pancake was close to perfect, thin and flaky with a hint of chew and a simple, satisfying dipping sauce. We also relished our dumplings: the pleasure of slippery dumpling skin enveloped in neon-red chili oil, heat on the outside, savory bites within. Small, plump wontons, with a notable hint of sweetness to the meat, also came with chili oil, but were distinct from the dumplings in their thicker, yet still tender, wrappers.

Lamb with cumin Xinjiang-style — a province well northwest of Sichuan — offered multiple layers of spice, from the cumin-y paste on the tender slices of meat to the tongue-numbing Szechuan peppercorns. Onions, red pepper and celery were more than filler in this dish, but contributed their own salutory flavors and textures.

A surprise hit of the meal was Chinese eggplant in sweet flour paste, a preparation so foreign-sounding, we couldn’t quite imagine it till we tried it. Long slices of eggplant that retained the beautiful pale violet of their skins were cooked till they were softly just shy of falling apart and served in a wonderful sauce: silky, savory and slightly thick, but never gloppy or syrupy. The preparation is also available with tofu and pork.

Sushi was a fresh counterpoint to all this sautéed, spicy fare. Avocado maki, filled with plenty of velvety fruit, was near-perfect, an amazing feat this far from avocado-growing country. Tuna maki was also a solid offering, with none of the watery or metallic flavor mediocre raw tuna can offer. The only flaw was that the nori wrappers had not been toasted, meaning that they were soft and chewy rather than slightly crisp and aromatic.

Szechuan Spice is a welcome addition to the ever-growing array of authentic, regional Chinese restaurants in Pittsburgh.