System Recheck: One final glimpse at the stories that made 2011

There was a nasty election and a new governor, and Hines Ward became the king of the dance 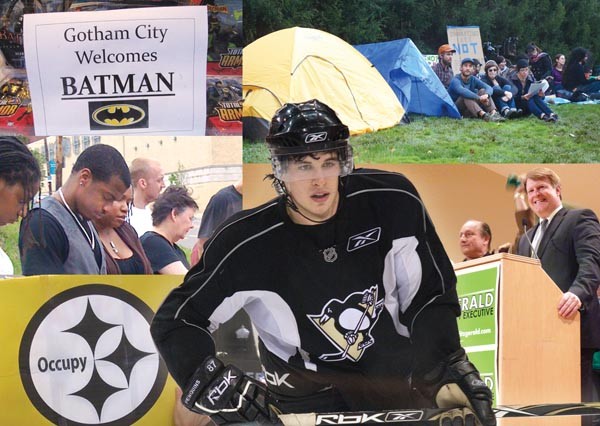 Photos by City Paper staff
2011 featured a wide-array of stories including the local filming of the new Batman movie, the arrival of the Occupy movement, the election of Rich Fitzgerald as county executive, a decision in the case of Jordan Miles and the ongoing concussion drama of Sidney Crosby

Looking back, it's tough to put a label on 2011 because the stories that made up the past 365 days vary so widely. Some stories, like the Jordan Miles abuse case, were year-long holdovers in the headlines, and some -- the Penn State sex-abuse scandal -- rocked them. There was a nasty election, a new governor taking power and, of course, some juicy sports stories -- on and off the field -- to grab our attention. Here are some of 2011's highlights.

JAN. 1: The University of Pittsburgh fires newly hired head football coach Michael Haywood after he is jailed on domestic-abuse charges in South Bend, Ind. He will be replaced by Todd Graham of Tulsa University, who will leave the 6-6 Panthers abruptly almost a year later for a job at Arizona State University, announcing the move to players via text message.

JAN. 1: Pittsburgh Penguins star Sidney Crosby suffers the first of two concussions in four days. The injury will sideline him for the rest of the hockey season and part of the next.

JAN. 10-20: A hoax press release on Fraternal Order of Police letterhead is sent to local media, claiming the union withdrew support from three police officers accused of severely beating then-high school student Jordan Miles in Homewood a year prior. City police then launch an investigation into who sent the release, and trace its origin to the Crazy Mocha coffeeshop and Dreaming Ant video store in Bloomfield. Officers raid the store, seizing a hard drive and wireless router. No charges are ever filed.

JAN. 11: State Sens. Jeffrey Piccola (R-Dauphin) and Anthony Hardy Williams (D-Philadelphia) unveil a controversial bill that would allow students in the state's lowest-performing schools to attend a school of their choice, private or public. The voucher program has been a yearlong priority of the Republican-led General Assembly. The Senate passed an amended version of the bill in October and, as of press time, it was pending before the House.

JAN. 19: Allegheny County Controller Mark Patrick Flaherty announces his candidacy for the county-executive post that will be vacated by Dan Onorato, who lost to Tom Corbett in the gubernatorial election. Nearly two weeks later, then-County Council President Rich Fitzgerald will announce his own campaign for the post, starting a pre-primary Democratic showdown between the two.

FEB. 6: The Green Bay Packers prevail over the Pittsburgh Steelers to win the Super Bowl, 31-25.

FEB. 10: A trial begins for state Sen. Jane Orie (R-McCandless) and her sister Janine, accused of illegally using Orie's state office to do campaign work. After three weeks of testimony and jury deliberations, Judge Jeffrey Manning will rule a mistrial based on the claim that the defense submitted documents that were forged. The judge notes that "Ray Charles could see that signature was doctored." The public corruption retrial is pending, as are new charges against Orie, for perjury and tampering with evidence.

FEB. 15: An arbitrator orders the city to reinstate paramedic crew chief Josie Dimon, who was fired in 2010 for not helping a Hazelwood man who died in his home during the Feb. 5, 2010, snowstorm. Paramedics said they could not get their ambulance to Curtis Mitchell's home in the snow, and Dimon could be heard on the radio saying, "This ain't no cab service." The city appealed the reinstatement.

FEB. 22: While it's no secret county-exec contender Rich Fitzgerald vehemently opposes reassessing property values in Allegheny County, he tells City Paper he'd "go to jail" before sending out the bills to residents.