Film imitates life imitating art imitating life, and so on, in this loopy drama. 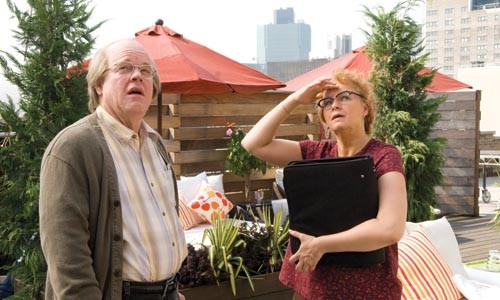 Before you read any further, there's something you should know. Every word and idea in this review is interchangeable with every other word and idea. You can even switch words for ideas and ideas for words. Really, I mean it. Know I don't. No, I don't.

I hope you won't mind my saying this: A synecdoche is a figure of speech in which the part stands in for the whole (when you buy a head of cattle, you buy the whole cow), or where the whole represents a part (the White House didn't issue a statement, just the press secretary did).

Charlie Kaufman, the fertile mind that (who?) wrote the wonderful Being John Malkovich, is the writer/director behind Synecdoche, New York, the story of theater director Caden Cotard (Philip Seymour Hoffman), who lives in Schenectady, N.Y. (get it?), with his wife, Adele Lack (Catherine Keener), an artist preparing for a big show in Germany. Their daughter, Olive, is bright and curious and neurotic ("I don't want blood!" she says, when she learns she has it) in the way the children of NPR listeners usually are. When we meet her, her poop is green. ("Olive" -- get it?)

For about 30 minutes, Kaufman makes a movie unlike anything he's made before: a real one, where the people -- albeit somewhat more intellectually lofty (although no less self-absorbed) than Joe the Plumber -- face human dilemmas and have human emotions.

They struggle with their relationships and worry about what will happen next in their lives. They have health problems and must decide what to wear. This is rewarding, and exceptionally well done: Kaufman films his movie handsomely, confidently, directing his gifted actors to recite well-paced and highly intelligent overlapping dialogue. Their silences are just as compelling.

But then Kaufman goes all post-structuralist on our asses. His characters' names are our first clue (Cotard's syndrome is a nihilistic mental disorder), and less than half an hour in, weird things begin to happen. Hazel (Samantha Morton), who runs the box office at Caden's theater, looks at a house she might buy, and it's on fire. Is this a dream? A metaphor? An alternative reality? Of course, she buys it, and it continues to burn, every time we see her in it.

Little by little, then a lot by a lot, the impossible (or the surreal, if you prefer) begins to devour Synecdoche, New York, and the "real" becomes its disorienting mirror. Caden wins a MacArthur "genius" grant (yeah, sure) after he stages a decidedly regional-theater interpretation of Death of a Salesman, and he begins work on a project that literally takes him the rest of his life.

In a warehouse, Caden recreates humanity: scene upon scene of people and places and happenings, some of them autobiographical -- remembrances of things past and present, you could say -- with actors playing him and Hazel and the others in his life, and with casting ongoing, day after day, year after year, as he tries and tries and tries some more to come up with a title for his play and the meaning of his existence.

Adele and Olive are long gone through all of this, having stayed in Germany after Adele opened her show. Caden tries to find her and to reconcile (or does he?), eventually discovers Olive all grown up and stripping for men behind a two-way mirror (or is she?), has affairs with Hazel and with one of his play's actresses (Michelle Williams). His play undergoes perpetual re-vision, his life unfolds in occasionally random order, his body slowly rots away in the throes of a mysterious illness (Cotard's syndrome come to life -- or death), and so on and on and on.

Caden finally finds a name for his opus, and the fact that it takes the entire film plays two roles (as does every actor, more or less): It's a running gag (not a very "funny" one), and it also reinforces the notion that once we name something, we imprison its meaning and possibilities within the name we choose. ("That for which we find words is something already dead in our hearts. There is always a kind of contempt in the act of speaking." -- Nietzsche.)

So what's behind Kaufman's name for his film? Let's try this. Every scene of Caden's nameless epic is a shard of humanity that represents the whole shattered human experience, and the production itself is a simulacrum of each of our own tragic individual lives. There. I get it. Of course, if Kaufman really had balls, he'd release his movie without a title.

This is relentlessly depressing stuff, and yet, there's copious humor in Synecdoche, New York. I guess you could say that a spoonful of sugar helps the meta-spin go down. Most of it is intellectual: plays on words and literary references. Call it Proust meets Von Trier meets -- well, Charlie Kaufman. Marcel, Charlie. Charlie, Marcel. Marcel, Charlie -- Lars.

I often wonder how actors maintain a performance in the midst of such narrative muddle. I suspect their director simply tells them to play each individual scene as if it's a real part of a "whole" (i.e., linear and coherent) film. That's another synecdoche.

On the one hand, movies like this challenge you to think about human experience, the artistic impulse, the making of art, and how those things interrelate. It helps to have a master's degree, or at least a liberal-arts degree from a good school. But on the other hand, it's hard to make a film this loopy without distracting people from its humanity, as hard as it tries to bring us back every few scenes or so. A buffet of ideas like this invites you to gorge yourself, rather than letting you savor a few well-chosen morsels. No wonder Olive's poop is green.