Screenshot
Bub from Day of the Dead (1985)
Zombie television series are nothing new to the cable landscape, with The Walking Dead being on for what seems like forever. Fans of the undead also have plenty to binge with the Walking Dead spin-off, Fear the Walking Dead, as well as iZombie, Z Nation, and many more. But apparently SYFY didn’t think this was enough, as they’ve announced a new series that might sound familiar to proud local zombie lovers.

On Feb. 28, SYFY announced it would release a TV show based on Day of the Dead, the third film in the Living Dead series made by late Pittsburgh-based filmmaker George A. Romero. Set to air in 2021, the show is described in a press release as “the intense story of six strangers trying to survive the first 24 hours of an undead invasion.”

Romero released Day of the Dead in 1985 as the sequel to Night of the Living Dead (1968) and Dawn of the Dead (1978), both of which were shot in and around Pittsburgh, including at landmarks like the Monroeville Mall. Like the first two films, Day was shot locally, as well as in other parts of Pennsylvania and in Florida.

Day continues the story that began in Living Dead by following a group of soldiers and scientists trying to survive in an underground missile silo fortified against thousands of undead. Day features special makeup effects by Tom Savini and the appearance of Bub, a still somewhat-human zombie that went on to become the face of the film.

As soon as the news hit, however, Romero’s estate was quick to distance the iconic horror director’s creation from the new series. The George A. Romero Foundation, a nonprofit that has worked closely with various local institutions to preserve and advance Romero’s legacy, posted a tweet saying that Romero’s widow, Suzanne Desrocher-Romero, “would like everyone to be aware that this project is neither sanctioned nor endorsed by the #GeorgeARomero Estate, and — aside from the title— it bears no relationship whatsoever to George’s DAY OF THE DEAD or any other projects.” 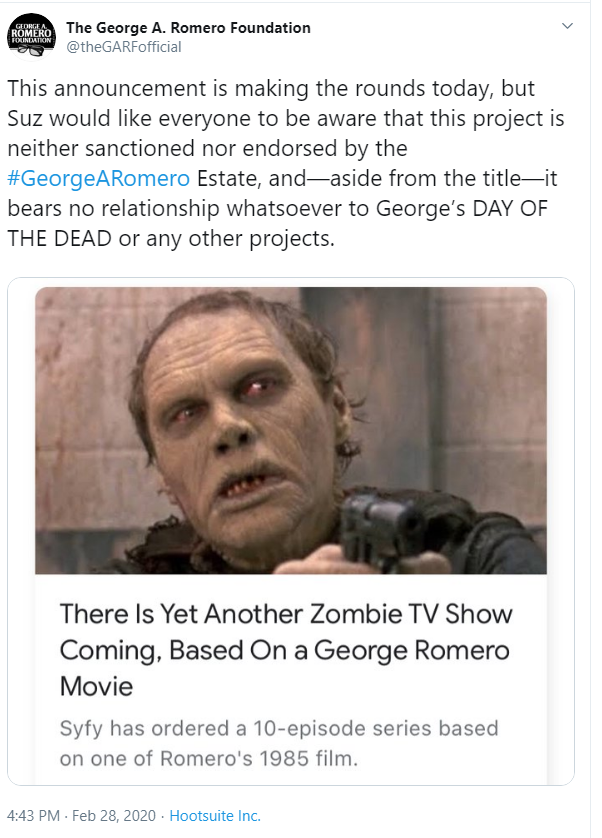 Screenshot
Twitter statement from The George A. Romero Foundation on Day of the Dead TV series, Feb. 28, 2020
SYFY seems to acknowledge this somewhat – while a press release says the show is based on Day of the Dead, it later says, "This ode to George A. Romero’s famous flesh-eaters reminds us that sometimes all it takes to bring people together is a horde of hungry zombies trying to rip them apart."

So check out this ode to Romero when it premieres next year.

Speaking of Day Of The Dead , Romero

'Day of the Dead' screening and tribute to George Romero, Tue., Oct. 24

The return of the corpse flower at Phipps Conservatory