Swissvale resident pens book on one of the most criticized poets, songwriters, actors, and performers of the 20th century | Literary Arts | Pittsburgh | Pittsburgh City Paper

Swissvale resident pens book on one of the most criticized poets, songwriters, actors, and performers of the 20th century

Remember Rod McKuen? If you do, you are likely over 50 and fall into one of two categories:

1. You’re thrilled someone remembers one of the most popular figures of the 1960s and 1970s in Barry Alfonso’s biography, A Voice of the Warm: The Life of Rod McKuen (Backbeat Books).

2. You’re wondering why there is a book about one of the most criticized poets, songwriters, actors, and performers of the 20th century.

Alfonso, a Swissvale resident, understands McKuen is a polarizing figure.

“I appreciate a lot of what he did,” says Alfonso, who has worked as a music journalist and songwriter, and earned a Grammy nomination for the liner notes for the Peter, Paul and Mary box set Carry It On.

“I wouldn’t endorse everything he did aesthetically. I think he was a force for good and a force for kindness," says Alfonso. "I think he wrote some wonderful songs, and I think that his books of poetry helped people.”

No matter how McKuen’s work is perceived, it’s undeniable his life was quixotic and unbelievable. Born in Oakland, Calif., in 1933, McKuen was abused physically and sexually by relatives as a child. After running away from home, he ended up in a juvenile detention center in Nevada for three years. After being released from the facility, he joined a rodeo. That career was cut short by a riding accident in which McKuen broke both his legs.

But by 1954, McKuen published his first collection of poetry, And Autumn Came; in 1956, he earned a role in the teen film Rock, Pretty Baby! with Sal Mineo, Fay Wray, and John Saxon. And he accomplished these feats with little or no training in the arts, launching his acting career by sneaking onto the Universal Studios lot, finagling a screen test, and being rewarded with a seven-year contract.

“He would dream up things and make them true,” Alfonso says. “And he would announce they were true before they were true. He did that repeatedly when he was an adult.” 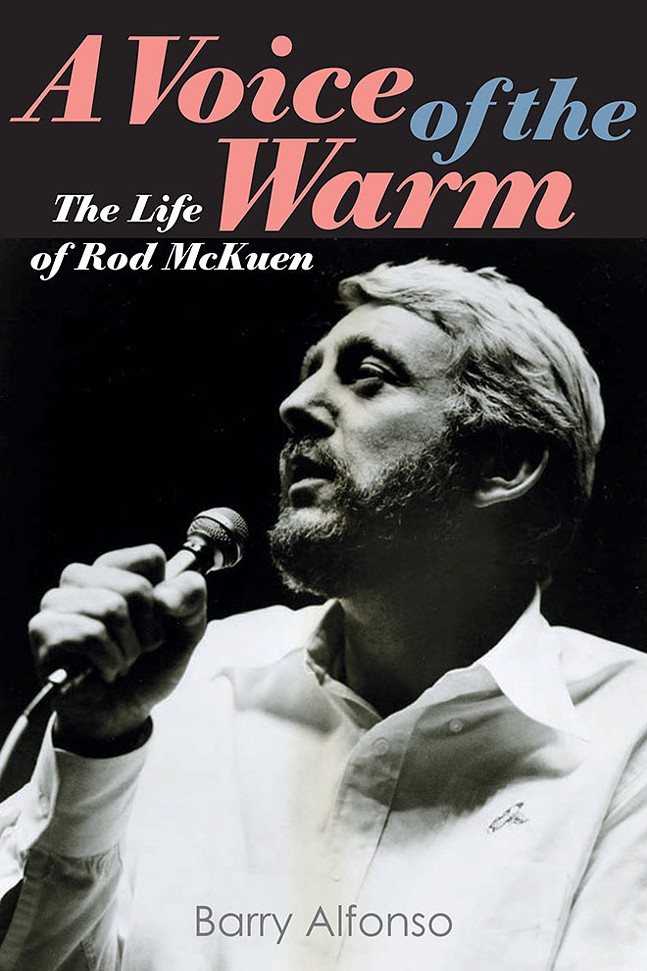 Alfonso admits McKuen was an unreliable narrator of his own life; his claims about fathering a child and publishing under a pseudonym were probably falsehoods. But what’s indisputable are his numbers: 100 million recordings and 60 million books sold, according to his Associated Press obituary from 2015. And McKuen redeemed himself in the eyes of many critics when he started to speak out for LGBTQ rights in the late 1970s. McKuen, who had relationships with both men and women, was especially pointed in his criticism of Anita Bryant, then a spokeswoman for Florida Citrus Commission and a fierce opponent of gay rights.

After Bryant led a campaign to repeal an ordinance that prohibited discrimination based on sexual orientation, McKuen dubbed Bryant "Ginny Orange Seed" and wrote a protest song called "Don’t Drink the Orange Juice" (a reference to the nationwide orange boycotts in response to the campaign).

“There seems to be some connection between his willingness to crusade against [Bryant] and what was going in his own life,” Alfonso says. “He had been fabulously successful for about nine years at that point and it was starting to wear off. He was selling less records, he was a little less of a celebrity, but he was still very comfortable. I think it probably had something to do with who he was and to acknowledge who he was. … He would not say he was gay, and he did not say he was defending the anti-gay statutes. But there was obviously something in the controversy that touched him.”

Kristin Lepionka, author of the Roxane Weary mysteries, will visit Mystery Lovers Bookshop in Oakmont on July 14 for the Coffee & Crime series. The Stories You Tell (Minotaur) is the most recent book in the series. 11 a.m. 514 Allegheny River Blvd., Oakmont. mysterylovers.com