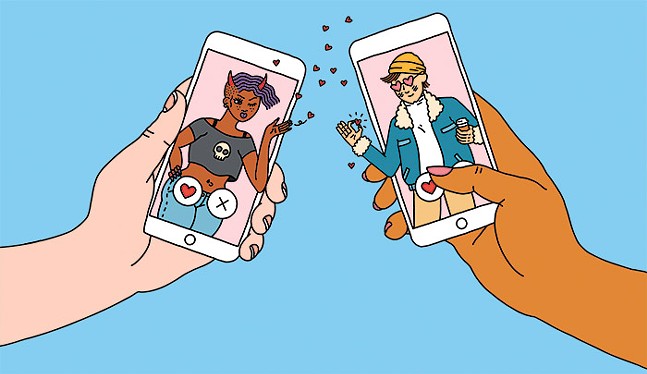 In honor of Valentine’s Day, we put out a call a few weeks ago for readers to send us their best — and worst — stories from online dating. We received a ton of great entries (sadly, more than we’re able to print), including a surprising number of beautiful stories that ended in marriage proposals. (If you’ve been hesitant to jump into the online dating pool, there’s hope, Pittsburgh!) There were also — luckily for everyone reading the winning stories on the following pages — some funny misses. Whether you’re happily single, coupled, or still swiping, we hope this week treats you right.

The Pittsburgh Test
by Jessica Vickers

This wasn't the worst, but I definitely survived a yinzer nightmare. I had been seeing this guy for a little while, and we had met on the OkCupid dating app. I invited him over for takeout and to watch movies, and I decided that I would introduce him to a yinzer delicacy ... Pierogi Pizza! He was from out of town, so I was so excited to introduce him to all things Pittsburgh. He took one look at this pizza, and I could see the instant revulsion. I couldn't convert him to the Church of Yinzer, and I think I ended up eating the whole pizza by myself. Things didn't end up working out between us, and I don't want to say it was because he wasn't interested in pierogis … but it probably didn't help.

I met him at Kelly’s because that’s where I met almost all of my first dates. There was something comforting about the old booths and sticky floor and dim light when confronting strangers. Kelly’s proximity to other restaurants meant that if things went well, I could suggest walking to get dinner, and if they didn’t … well, I could easily excuse myself after one drink and be home quickly. Inevitably, I ran into people I knew (this is Pittsburgh after all) who would glance over from their own booth, entertained to watch a first date play out. The staff knew me by then, they must have witnessed these rendezvous dozens of times, but they never said anything. This mutual silence felt like an unspoken agreement, but was more likely apathy.

I treated online dating like a job. Nearly endless prospects were funneled into an ever-growing pipeline with a swipe. I maintained a decent conversion rate, which resulted in a few face-to-face meetings per week. I even outsourced the work for a while, handing over my passwords to a trusted friend with excellent taste. She swiped, screened initial conversations, and when approved, shared my phone number so the potential suitor could reach out to schedule a date.

By the time we were sitting across from each other, I had a routine. A routine that was quickly disrupted when he told me that he was attending a Quantum Theatre production that night and needed to leave by 7:30. I was simultaneously relieved to have an early out and intrigued by a person who went to plays alone.

He was genuine, smart, and interesting, so that even the most mundane aspects of a first date conversation (the sibling exchange, explanation of work, etc.) felt fresh and exciting. We were finishing our second beers and nearing his 7:30 deadline when he asked, “Do you want to come with me?” I already knew that I did.

And that’s how I ended up not at dinner in East Liberty, or home early, but in an auditorium in Troy Hill. It was the best first internet date I’ve had. Thankfully, he’s still disrupting my routine.

Year of the Dog
by Ben Stoviak

The year I spent away from Pittsburgh living in Northern Kentucky, newly single and mostly occupied by rewatching pressure cooker infomercials on Antenna TV, I met Bobby. He looked a lot like me — which wasn’t really my thing — especially since I was trying to build a fresh and different life. But he persisted on Grindr until I agreed to meet him for a date on New Year’s Eve.

I drove the 90 minutes to Lexington, Ky. after work on Friday night. I arrived at his house and knocked on the door. “Hey! I’m sorry. I’m just fixing my hair and letting the dog out! I’ll be right out!” His accent was cute.

He opened the door again. He was very handsome: slim, well-dressed, with thick black hair and pretty tattoos. But panicked. “I CAN’T FIND MY DOG!” He closed the door again. Behind me, I spotted the shadow passing through the street, car lights coming upon that shadow, and then heard the sound of impact. The car screeched. So did the dog.

I knocked again. “Um. I think your dog just got hit by that car.” I pointed to the car, and Bobby started running after it. His dog had gotten stuck in the tire well of the car. We scooped her out and carried her into the house. She was bloody and scared, and I wasn’t either of those things, but I did think, “Oh, well, what kind of ancient omen against love is this?”

Bobby’s roommate and I cleaned the dog’s fur. Bobby was audibly throwing up in the bathroom. When he came out, he looked at me and said, “We’re taking her to the vet. You can come with us.”

For some reason, I agreed. For three hours, we sat in mostly silence in the waiting room of the vet clinic. Bobby and his roommate fought with the receptionist about the payment. I stared at my phone and tried to make conversation, still on a first date in a vet’s office with a strange Kentucky hairstylist from Grindr and his lesbian roommate on a major holiday.

Eventually, we drove back to the house. The clock struck midnight during the drive, and nobody spoke or acknowledged the changeover into the New Year. In the driveway, where this had all begun, Bobby asked me if I still wanted to go out to a bar. “Um.” I hesitated so that I could check to make sure I couldn’t leave, right then, and drive home to make last call. I couldn’t. “Yep! Sure do!” I laughed.

We did kiss that night. And I spent the night. After a few weeks of traveling to and from Lexington, I started becoming used to the dynamics of sleeping in bed next to an injured dog. And the long drives there. And dating someone who looked kind of like me. It was the worst date I’ve ever been on in my life. But I guess nobody reads stories expecting a happy beginning.

I should have known the date was going to go badly from his drink order: a vodka with Pepsi. That’s the type of drink teenagers mix together because it’s all they can get their hands on, not something a grown man over the age of 25 should be drinking in public, no less.

Before we even met up, Vodka Pepsi texted me to see if we could change our meet-up location from Round Corner Cantina to Industry. Industry is not really my scene, but I thought maybe he was into beer and I said so when he ordered that disgusting combination.

“Oh no,” he said. “I hate beer. But I looked online at the drink menu for Round Corner, everything was made with tequila, and I really hate tequila.”

“Uh, they have a full bar,” I said, flummoxed at this rationale, as he took a big sip from his drink.

I don’t know what Vodka Pepsi learned about me, because he didn’t ask me a single question. I occasionally shoe-horned bits of my life around what he was saying, but he would bring the conversation back to himself again and again. It seemed the specifics of who I was as a person didn’t matter. I was a girl, I was breathing, and I was talking to him. That was apparently good enough. For some girls, shoe-horning themselves around a man’s life is good enough, but not for me. This would never work out.

He insisted on walking me to my car, despite the fact that it was directly across the street. He asked for my number and I demurred.

“Oh, just keep messaging me on Tinder,” I said.

Before I could unlock my car door, he mumbled, “How about a goodnight kiss,” and proceeded to put his lips on mine, his tongue barging into my mouth like a wet dog. The vile taste of vodka and Pepsi lingered even after I pulled away. As a goodbye gift, he left some drool on my chin.

It was a five minute drive from the bar to my house and in that time, Vodka Pepsi managed to send me a message that still creeps me out years later: “I hope the kiss was as good for you as it was for me.”

As with his drink order, he was the only one who liked it.

If it’s that easy to go out and find a soulmate as if you were shopping for shoes, then something has gone terribly wrong in my opinion. I guess it’s the hopeless romantic in me, but when I’m seated across from a stranger that I’ve chatted with for all of two days and this said guy is planning our future, I hear major alarms.

It was all Cosmo magazine's fault for my downloading Tinder. I had just moved back from surviving New York, and I figured I'd dip my toe in the dating pool.

I’m attracted to people who are the opposite of me, and Ryan was just that. He had gorgeous green eyes, nice hair, and seemed a little together from his profile. Unfortunately, his profile forgot to include he had a kid, a suspended driver’s license for drinking and driving, and sold bootleg DVDs for a living. Unknowing those things beforehand, I decided to continue my dating roulette by meeting him at a bar in Oakland.

After meeting, we decided to walk around enjoying the unusual sunny weather. The fact that he was carrying a bottle of Peach Amsterdam vodka around in his backpack should’ve been a red flag, but I went with it to get to conversation. We ended walking around sipping spiked sweet tea that we made with reusable cups from CVS. We talked for two hours and he was a gentleman with lots of stories, but he also shared many nightmares.

Our second date was a burger spot near his house. He showed off said house, and it was disaster. It was reminder that I could do better and that sealed the deal for me. It also shocked me when I found out that it was his son’s birthday, and he was choosing to spend time with me instead. My spiked milkshake and turkey burger was the best part. Ryan, being delusional, didn’t believe in colorism or understand why young women were waiting to have kids instead of having kids young. “When you get older you can’t do whatever you want. You’ll be old.”

I don’t like to admit it, but I ghosted him. After this encounter, I called my friends laughing to the point of tears and quickly dragged the Tinder app into the garbage pail on my screen. This couldn’t be real life.

When you stop looking and you're just out here living your best life, love finds you. I slid in Evan's DMs because he posted a status about having a bad day. A month later, I sold my Thrival Tickets and went to a gallery crawl to meet him. It was way too rainy for a gallery crawl and he was an hour late, but it was the greatest time. Conversation was easy, even when he went on alien rant. Sometimes all it starts with is the click of a button to find your forever person.