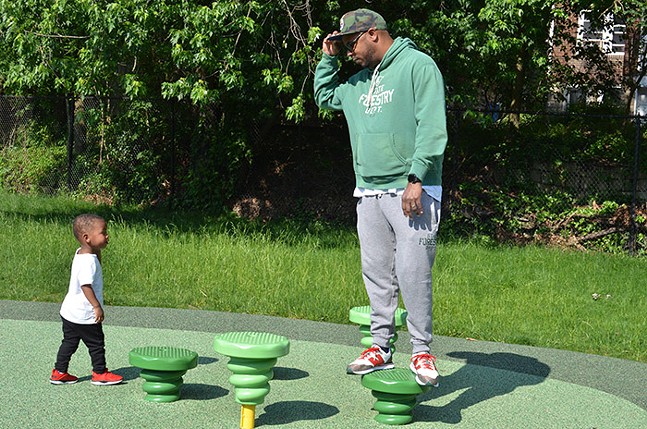 How would you define your style?
’93-’95 Classic Backpack Era and Dad

Do you have a favorite designer? Who are they, and what do you like about them?
Ralph Lauren is my favorite and most faithful. He designs classic, timeless looks that mostly never go out of style. I literally still have Polo Ralph Lauren shirts, hoodies, and jackets that I’ve owned since high school. I can even still fit in a few of them! Fortunately, I was over-invested in the over-sized, baggy look in high school. Also, there is virtually no other clothing line where I can wear a teddy bear on my sweatshirt and not look like a pedophile.

Can you tell me more about your favorite designer? Pick one and tell me how you were introduced to their design.
I was introduced to ’Lo when I was really young, spending summers with family in D.C. In the DMV area, late ’80s, early ’90s, there was basically one uniform: ’Lo, Guess jeans, and New Balance or Nike Jordan/Air Max tennis shoes. Anything else, you were considered a ’Bama. So I looked up to all of my older cousins who rocked it faithfully and would hand me down their clothes. I actually grew up in Harrisburg where street fashion was heavily influenced by Philly and New York styles given its proximity, so the ’Lo culture was just reinforced at home and through hip hop. By high school, ’Lo was basically the minimum cost of access to Fly Boy/Girl culture.

Do you dress differently for work and if so, in what way?
Nope. I’ve worked from home/remotely for basically my entire career, so I couldn’t tell you what office/business dress code is to save my life. I’m straight hoodies and sweats out the door and in the door. I’m a little more sloppier with it at the home office, though — think The Dude, Big Lebowski. For Zooms, I might step it up to Walter Sobchak.

It is about 100 degrees in Wightman Park, but you’re wearing a sweatshirt. You mentioned that you cannot tell what the weather is from your house.
We keep our house freezing, like an environmental embarrassment of air conditioning. I am bad about checking the weather before leaving the house so I usually bounce in whatever I have on. However, for this one, I truly misjudged the heat. I knew abstractly that it might have been hot, but this is also my most comfortable sweatsuit and I didn’t want to take it off. I also knew I was going to your fashion shoot and this was how I chose to represent myself. But yes, that was a mistake. It is hot as balls. I wish I had an answer like, “I stay cool, no matter the temp,” but this was just regretfully vain.

Tell me about the clothes you’re wearing today. I will ask about those kicks later.
This is actually a Ralph Lauren sweatsuit — a lot of my ’Lo doesn’t carry the horse logo or his name, so it’s not always obvious. And it worked for this shoot because unless Ralphie was hitting CP off with some ad money, there was no need to flash the symbol. But it really is one of my most comfortable sweatsuits (but for the house, of course). I also really dig the “State Forestry” design. I’m all about the trees.

We have a special guest here today too, your son Emory. How old is he and has he started to develop his own sense of style? Or does he tell you when he likes or doesn’t like something?
Yes, my young buck Emory, who is two years old. He actually does pick out his own clothes. Unfortunately for him, all of his clothes are Polo. He has the illusion of choice.

Do you have any gifts from someone that you wear often or every day?
I guess my Apple Watch, which was a gift from my wife, Thena. The damn thing didn’t tell me how hot it was going to be, though.

Do you wear a gift to yourself that you wear often?
If grey sweatpants count.

CP Photo: Tereneh Idia
OK, those kicks. I am obsessed with them. Who is the designer and tell me what you like about them?
These are New Balance, the 237 line, which is one of its newest and least expensive lines. They are very comfortable and age-appropriate. There is basically no way for you to be 40+ years old and look corny in a pair of NBs, like you can in, say, a pair of Jordans. This particular pair is from a recent drop NB did with Casablanca, an overseas brand — and here’s where I let on that I’m a bit more into fashion than I’ve been frontin’ for.

Casablanca is a fairly new brand started by Charaf Tajer, who came up under Virgil Abloh. This is the third or fourth collab with NB, the first of which I first saw Raekwon wearing on his IG feed. I instantly fell in love with the colorways, the retro tennis shoe silhouette, and his trademark Moroccan jacquard print. If you get them when they first drop, they’re not very expensive at all, but given they come out in limited releases, they end up reselling at much higher rates. I’ll go ahead and stop sounding pretentious now.

How many pairs of shoes do you have? You do not have to answer that.
Is my Mom going to read this?

Drag queen Princess Jafar on celebrating herself every day, “loudly and proudly”