"When I come home at the end of the day, I whip up a bowl of icing." 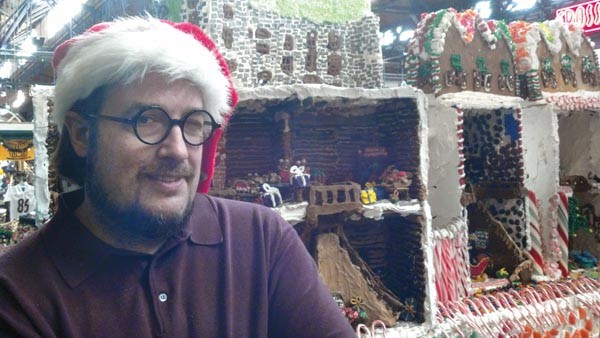 Photo by AmyJo Brown
A carousel on Gingerbread Lane is made entirely of icing and candy.

"When I come home at the end of the day, I whip up a bowl of icing," says the 36-year-old consultant for the hotel industry. "By the time I'm stressed out over the gingerbread house, I'll have forgotten about work."

For 19 years, Lovitch has been whipping up such batches year-round, culminating in an annual holiday display he's named "Gingerbread Lane." This year's creation, which can be viewed at Station Square, features 142 gingerbread structures, including storefronts for a pierogi shop and an eggnog distillery, as well as a railroad, a subway system and the essentials a town needs to function, such as a municipal hall, school and fire department. The largest of the structures, the Plum Pudding Hotel — made out of 7,104 "bricks" of licorice — overlooks it all while Santa's elaborate workshop hides in the mountains behind the town.

All told, the display includes 1,600 pounds of icing, 400 pounds of candy and 370 pounds of gingerbread, says Lovitch, who moved to Pittsburgh with his wife six years ago.

He builds all of it by hand, baking the gingerbread and molding the icing into the forms he wants. That's different from many professionally styled gingerbread houses on display at this time of year, he says, recalling the first time he entered a competition at age 17 in his hometown of Kansas City, Mo.

Although he placed third, he says, "I quickly grew to hate the other gingerbread-house competitors." They used power tools — jigsaws and sanders — and got creative with the rules.

The woman who beat him used edible play dough.

"Who the hell eats play dough?" he says.

Clearing space for the next year's batch of houses (he'll begin whipping them up again in February), Lovitch, as he has every year, will give away each of the gingerbread houses on a first-come, first-served basis on the last day of the show, Jan. 6.

Nutella chocolate chip cookies that will 'change your life'