Sweet Choices: Traditional wedding cakes don't have to be so traditional 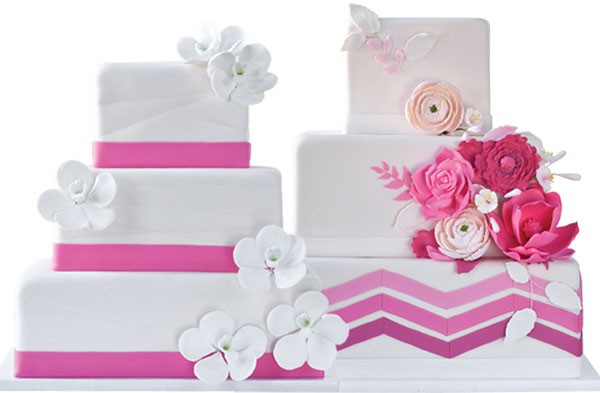 Let's face it: Most of your wedding guests are just there for the cake. (And maybe you are too!) Fortunately, current wedding-cake trends are all about making everyone happy.

Though Pinterest abounds with offbeat nuptial offerings like cupcakes, cake pops and elaborate fruit pies, Oakmont Bakery owner Marc Serrao — who has been in the wedding-cake business for almost three decades — says that the customary multi-tiered, fondant-covered cake is still king.

Modern couples are, however, less likely to select a mile-high mass of white frosting.

"At my bakery, we [often] recommend that people have a two- or three-tiered cake, and a bunch of different desert cakes," he explains. "So, the dessert is really a dessert and not just, 'everybody gets a piece of white cake.'"

While Serrao doesn't advocate ditching a primary, centerpiece cake, he suggests offering a variety of other non-cake pastries as well: Think of your traditional cookie table, with even more options.

"At my daughter's wedding we did that, and it was the talk of the wedding. People love to have all those choices at their fingertips," he says.

Serrao also notes a relatively recent gender shift when it comes to choosing cakes. "It used to be very much bride-themed, and now the brides and grooms both seem to care about the style of cake," he says. Grooms in particular show concern over the cake's shape and color.

Many couples opt to showcase their interests — the Oakmont Bakery team has made cakes with themes ranging from cowboys and the beach to Pittsburgh sports. Even those with more traditional tastes are more inclined than ever to make distinctive choices.

"One thing's for sure," Serroa says, "where almost all cakes used to be white almond with cherry nut filling, now people are not afraid to have chocolate icing, chocolate cake, lots of different fillings, way more personality."

And while these changes might not qualify as a confectionery revolution, it's easier than ever to have exactly the kind of cake, and the kind of wedding, you want. And that's the sweetest part.