This is, without question, the greatest Sweeney I've ever heard. 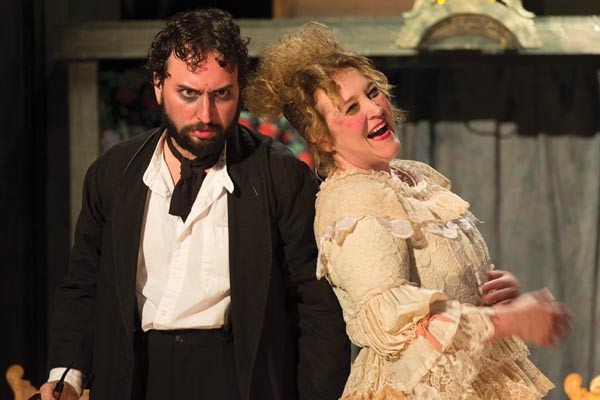 Last year Stephen Sondheim published two books detailing the creation of such shows as West Side Story, Into the Woods and Company. I was especially interested in Sweeney Todd: The Demon of Fleet Street since I consider it the world's greatest artwork and was curious how one person can bring forth such genius.

As it turns out, it's all about technique. Sondheim, at least not conspicuously, doesn't worry about theme and message. His focus is detail: Does the meter scan? Which vowel is easier to sing on which note? Can a melodic line hold x number of syllables? It's the well-tended small stuff looking after the big.

I bring this up because I've just seen Stage 62's production of Sweeney, my third this season and, despite flaws and limited resources, it's the best of the bunch. How did this "little community theater that could" succeed where the others didn't?

Director Rob James has talent enough to understand that Sondheim (music and lyrics) and Hugh Wheeler (book) have a created a masterwork. It's now the task of James and company to put it up and make it sing.

Which it does. Gloriously. Scaldingly. With the mammoth work of music director Matt Thomas, conductor Steve Baldanzi and the very full orchestra, this is, without question, the greatest Sweeney I've ever heard. Josh Mulkey and Becki Toth, as Todd and Lovett, display incredible command and power. Joseph Michael Moser and Lindsay Bayer (Anthony and Joanna) should consider an iTunes release of their numbers. Leon S. Zionts, J.P. Coletta, Sean Lenhart, Seamus Ricci and Cynthia Dougherty provide blazing power in supporting roles.

With a show this huge, sometimes just hanging on is Herculean … so if they get tripped up by muddy blocking, mushy amplification and a treacherous lighting design, it's almost to be expected.

But enough about that. This production is about talent and intent … and no ego. Stage 62 does Sweeney proud.