This is a gloriously sung production 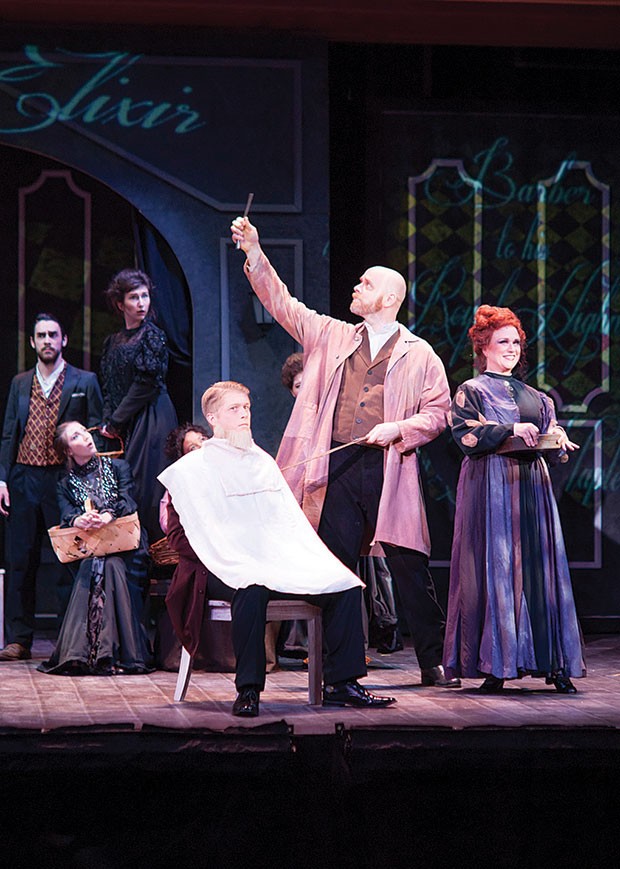 All musicals are difficult (Larry Gelbart famously said: “If Hitler’s still alive, I hope he’s out of town with a musical”) but some are harder than others … as the folks behind Pittsburgh Festival Opera’s production of Sweeney Todd: The Demon Barber of Fleet Street are probably sobbing into their pillows.

This show is physically challenging: We’re in Victorian London, where a vengeance-crazed barber, Todd, is murdering his victims while his neighbor, Mrs. Lovett, serves the corpses at her meat-pie shop (all those period props, costumes and set pieces!). And Pittsburgh Festival Opera ups the ante, presenting Sweeney in repertory with operas, recitals and revues.

The hardest thing, however, is that it’s Sweeney Todd — composer/lyricist Stephen Sondheim’s masterpiece, and to my mind, the greatest musical ever written. Failure would be heartbreaking. (Nobody cares if you ruin Phantom of the Opera; how could you tell?)

Since it’s Sondheim, it starts with the music, and this has a song-heavy score and constant underscoring; I hope musical director Douglas Levine and his orchestra get paid per note. The score swirls with color, mood and tone, which the extraordinary Levine and his players never miss.

Director Tomé Cousin has made “telling the story” the goal (easily lost in a mammoth work) and succeeds with skill and not a little flair. He occasionally clutters the stage with extraneous movement and business, but Cousin is known for drawing strong performances from a cast, and he does so here.

As befits an opera company, the performers are mostly singers who act (rather than actors who sing). And this is a gloriously sung production — gorgeous voices coming at us without the interference of amplification.

Andrew Cummings and Anna Singer sing Todd and Lovett with earthy vitality and force; their “A Little Priest” is a macabre delight. Adam Hollick and April Amante have the most beautiful songs and sing them beautifully. Bringing high notes and low laughs as The Beadle and Pirelli are Robert Frankenberry and Thomas Cilluffo with Adam Cioffari’s Turpin a dark, dank and disturbing presence. Lesley Baird and John Teresi provide haunting sadness as the Beggar Woman and Tobias.

The Scottsboro Boys at the Playhouse REP