Swastikas and anti-Semitic vandalism found in book in CMU library

Carnegie Mellon University officials condemn the anti-Semitic vandalism and are investigating the incident. 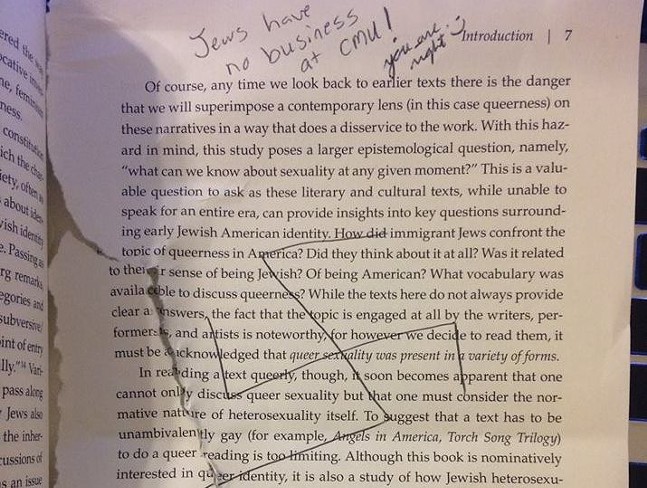 Photo courtesy of Adira Rosen
Anti-Semitic vandalism in book at CMU Hunt Library
Carnegie Mellon University sophomore Adira Rosen recently wrote a paper on a Yiddish Play called God of Vengeance for a drama class. For her research, she visited CMU’s Hunt Library on Nov. 29 to check out The Passing Game, a book that explores how Judaism and the LGBTQ community intersect in theater.

When she opened the book up to Page 7, she was shocked to see the words “Jews have no business at CMU!” scribbled in the margin and a large black swastika drawn in the middle of the page. Next to the text, apparently in different handwriting, reads “you are right” with a smiley face.

Rosen, who is Jewish, was especially dismayed at the vandalism because of its proximity to the Tree of Life mass shooting, which occurred about a month before. The synagogue is less than two miles from the Hunt Library.

“As a Jewish person, and a member of the Pittsburgh community, the shooting at the Tree of Life Synagogue, almost exactly a month ago, was the biggest tragedy that has ever affected me or my personal community,” wrote Rosen in a Facebook post. “Seeing anti-Semitism occur right down the street from your home is a tragedy beyond belief but to hold a hate crime in your hands is something for which I have no words.”

Rosen also discovered two more swastikas in the book, on Page 50 and on Page 163. 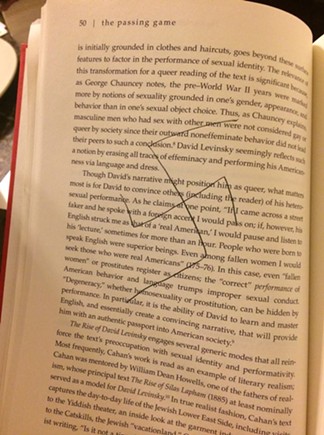 Photo courtesy of Adira Rosen
Second swastika on Page 50 of The Passing Game
In a statement sent to the Jewish Telegraph Agency, CMU President Farnam Jahanian condemns the anti-Semitic vandalism.

“I am distressed and saddened by yet another act of hate in our community,” said Jahanian. “We condemn this evil. We reject bigotry in all its forms, it has no place in society.”

University officials told JTA they are investigating the vandalism.

Pittsburgh's universities have seen a rise in anti-Semitic vandalism in the recent past. In January, more than a dozen swastikas were carved in the snow on top of cars in Oakland.

Jewish Federation of Greater Pittsburgh spokesperson Josh Sayles says the vandalism at CMU’s library is another example of the rise of anti-Semitism in Pittsburgh and around the world. Sayles praises Rosen for speaking up about the vandalism.

“This defacement of a book at the CMU library is just the latest example,” says Sayles. “Fortunately, we know that Jews are indeed welcome at CMU and that the views of whoever wrote those hateful words and drew those swastikas are not representative of the Greater Pittsburgh community. Pittsburgh is stronger than hate.”